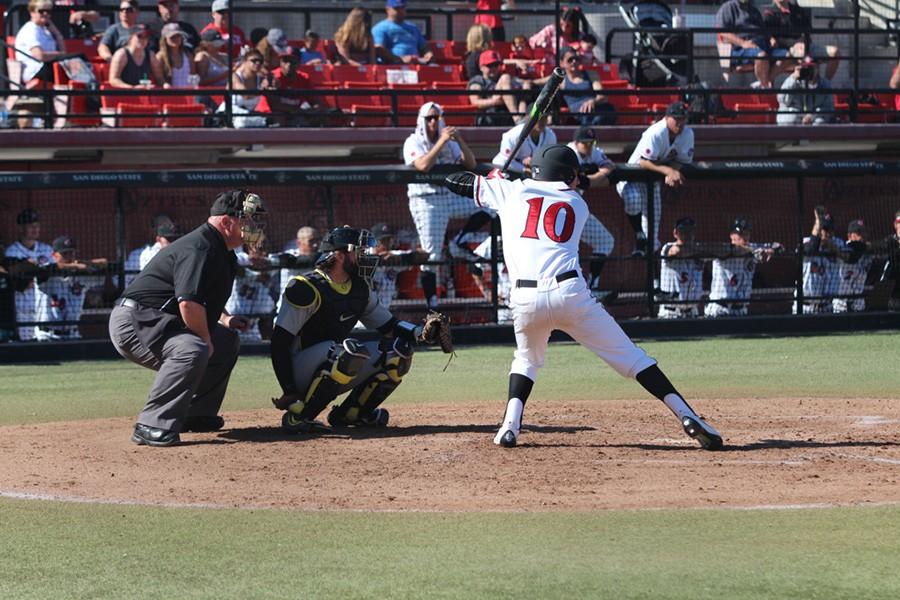 It’s expected for any sports team to go through highs and lows over time. No team can be great forever, and despite any previous success, there’s always going to be some down years.

The past five seasons, San Diego State baseball has experienced both sides of the coin. From the under .500 season in 2012, to the three consecutive NCAA tournament appearances from 2013-15, to the current 12-25 team this year, there has been only one player that has been through it all: redshirt-senior outfielder Spencer Thornton.

Though there are two other redshirt seniors on the team in right-handers Brian Heldman and Dalton Douty, Thornton is the only one to have been with SDSU every year.

Out of Los Osos Valley High in Rancho Cucamonga, Thornton is in his final season with SDSU after five years with the program.

When Thornton first arrived on campus Tony Gwynn was the head coach, Barack Obama was campaigning for reelection and former Aztec, Stephen Strasburg, was in the midst of his first major league season.

“What I’m trying to take away from (2012) is that even if we’re not winning as many ballgames as we’d like, just still be consistent, be myself and be someone that the younger guys can look at and say ‘If Spencer’s still going hard we still got to go hard,’” he said.

Thornton’s path to his veteran role has been littered with the good and the bad.

Though he was technically a part of the 2013 Mountain West Championship team, he had to sit out the whole season due to Tommy John surgery, hence the redshirt year.

“That really stunted his progress. There was a lot more awaiting him if he didn’t have to skip a year,” head coach Mark Martinez said. “But he’s battled himself back into being a premier guy. He’s really worked himself into being successful.”

Thornton recovered from his injury in time to help lead SDSU to its second and third consecutive MW Championships in 2014 and 2015. This season, Thornton is the usual tenant of the fifth slot in the lineup and out in left field. One of just two upperclassmen in the regular starting nine, he’s the elder statesman on a team full of younger players still maturing.

“Being an outfielder, I’ve worked with (Thornton) every day,” Chapman said. “He’s a pretty open guy. The first time I met him, he introduced himself to me and a lot of older guys really aren’t open like that.

“He’s one of my closest friends on the team. He’s very insightful.”

Through 37 games, Thornton is batting a respectable .287, good for third on the team, with eight doubles, a triple, and 17 RBIs. He’s also belted a team-high five home runs, one ahead of sophomore outfielder Tyler Adkison.

Thornton takes inspiration in part from his former coach and Major League Baseball Hall-of-Famer, Tony Gwynn, who died in 2014.

“Coach Gwynn was going through some tough times when he had cancer, and he showed up here everyday before practice, cracking jokes, and just being that positive guy even though it was a tough situation,” Thornton said. “That’s definitely one thing I’ve taken from it; Be the guy that’s going to put a smile on everyone’s face that day and be someone that everyone respects.”

Being a mentor on the team has not only helped some of the newcomers this year, it has helped Martinez transition into his era as the team’s head coach.

“He’s a kid that’s answered the bell, whether it’s on or off the field. He’s a calming presence in the clubhouse and takes everything off of the baseball field. He’s a true gentleman, a great citizen and a great leader,” Martinez said.

Not counting tournament play, Thornton has 14 college baseball games left, after which he will graduate with a master’s degree in business management.