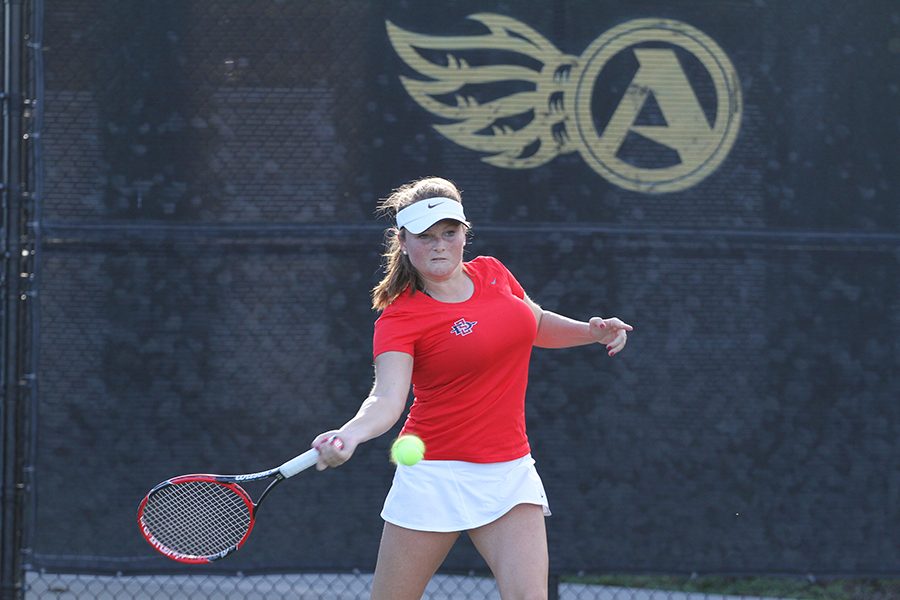 For someone who grew up in the Netherlands, San Diego might as well be a foreign planet with its sun-swept beaches and mild climate.

Despite the distance and differences, San Diego State women’s tennis senior Isabelle Hoorn is exactly where she wants to be.

The transition from the northwestern European country to San Diego came as a shock to Hoorn.

“It was so easy for me growing up there,” Hoorn said. “Everything was super easy-going. It’s very different from (San Diego) weather-wise, but (the Netherlands) is an awesome country.”

While growing up in a village outside of Amsterdam, Hoorn was always active in sports.

She dabbled in field hockey as a child and her parents had her pick up ice skating as well.

Hoorn first picked up tennis at around 10 years old and her abilities with the racket were quickly apparent.

“I got selected to play in the (Netherland Tennis Federation), so I basically started to practice more and more because I was asked for the Federation,” she said.

For Hoorn, attending and playing for SDSU became a realization through a network of her coaches in the Netherlands.

“I had a coach that knew a coach that was an assistant for another school in California,” she said. “That coach brought me in contact with (SDSU head coach) Peter Mattera and that’s how I ended up here.”

The team’s reputation is what sold her on playing for the Aztecs, though.

“I had a coach from the Federation that said (SDSU) would be good for me because I find academics very important,” Hoorn said.

Although the adjustment moving to a different country and continent was a lot to handle, it has been a smooth transition.

“I had never been to San Diego,” Hoorn said. “It was a total guess, but I could not have picked a better place.”

In her four years at SDSU, Hoorn has had some impressive feats.

As a freshman she engineered a three-match win streak.

Sophomore year she was an impressive 12-4 in doubles play and as a junior, Hoorn combined with former teammate Kristin Buth for the top-spot during dual-match play on nine different occasions.

In spite of her individual accomplishments, it was the team’s 2011-12 run in the Mountain West Tournament that stands out for Hoorn when she looks back at her time as an Aztec.

But her memories of the team are not solely on the court.

“Off the court we do so many things both with friends on the team and outside the team,” Hoorn said. “We get to travel a lot and all the little things we do together like the hikes, the skydiving and everything like that.”

As her college and playing career as an Aztec wane, Hoorn is looking forward to the next match of her life.

“This is going to be the last couple of weeks for me competing at this level,” Hoorn said.

“I’m a finance major and I’m planning to go to New York this summer and coach tennis there at first and then from there I’m going to try to find a (finance) internship in New York. I’m really excited for that.”