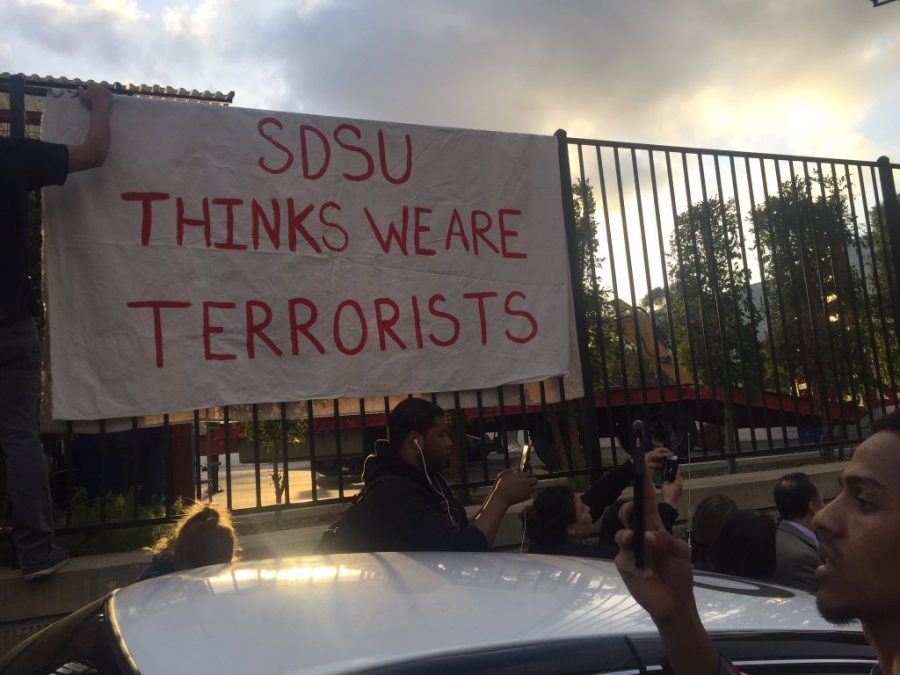 by Jamie Ballard, Will Fritz, and Jacob Sisneros

The protesters were critical of an email Hirshman sent out to all students on Tuesday regarding a number of posters made by the David Horowitz Center for Freedom, which named specific SDSU students and said they “have allied themselves with Palestinian terrorists to perpetuate BDS and Jew Hatred on this campus.”

In the email Hirshman wrote: “First, we recognize and fully support the rights of all parties to voice their positions on political issues, whether supportive or critical. We also understand that when parties adopt a specific political position they become responsible for their actions and these actions may produce criticism.” 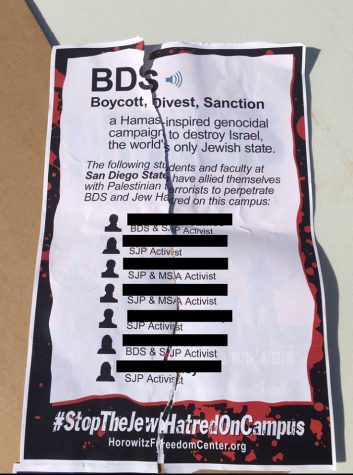 The protesters said Hirshman’s email was not critical enough of the posters, and asked for stronger support from the administration. After swearing in Miller, Hirshman quietly left the council chambers when the protesters arrived. Outgoing A.S. President Blaire Ward tearfully offered her support for the protesters, who later voiced their concerns during a public comment session.

“We tried to engage with (Hirshman), but he quickly bolted out the door,” senior biology major Hassan Abdinur said.

After leaving the council chambers, protesters got word that Hirshman was in a police cruiser near the Cal Coast Credit Union Open Air Theater, and rushed to “trap” him. The police cruiser was surrounded for over two hours as students chanted and even began praying.

Hirshman eventually got out of the police vehicle and stood to the side, surrounded by members of his administrative staff, who formed a barrier around Hirshman and several leaders of the protest so they could speak.

SDSU senior Osama Alkhawaja said “what is lacking from our leadership is courage,” and implored not just Hirshman, but also members of A.S. to defend those named in the posters.

“I wanted you to defend me,” he said. “They called us terrorists, and you didn’t defend us.”

Demonstrators demanded an apology from Hirshman. Initially, he refused to apologize for refusing to condemn the posters. He repeatedly said he would be happy to meet with the concerned students to discuss the matter, but the protest was not the appropriate way to have the discussion.

Alkhawaja said the protesters wouldn’t agree to leave simply after Hirshman promised to meet with him privately. He continued to demand an apology.

“The only thing that will get these students to leave is a public admission that you’re sorry for the way you’ve treated them,” Alkhawaja said.

“We have done things, inadvertently, that have upset or hurt people, and we are sorry for that,” Hirshman eventually said.

The university has not officially commented on the demonstration.

A.S. Board of Directors member Mustafa Alemi said he gathered with a group of activists Tuesday night after seeing the email and planned the silent protest.

Alemi said preventing Hirshman from leaving via car wasn’t planned, but demanding an apology was.

“(We wanted) an apology to the entire student body for his disrespect and disregard for the student voice (and) opinion,” Alemi said. “Without our tuition money he’s not living the life he has right now and the fact that it took two to three hundred students to block his car to have a conversation with us is incredibly disrespectful.”

At one point during Hirshman’s discussion with the demonstration leaders, a woman in the crowd cried, “You’re not listening to us.”

Editor’s Note: We have updated this article to include a photo of the original flyer with the names of students blocked out.