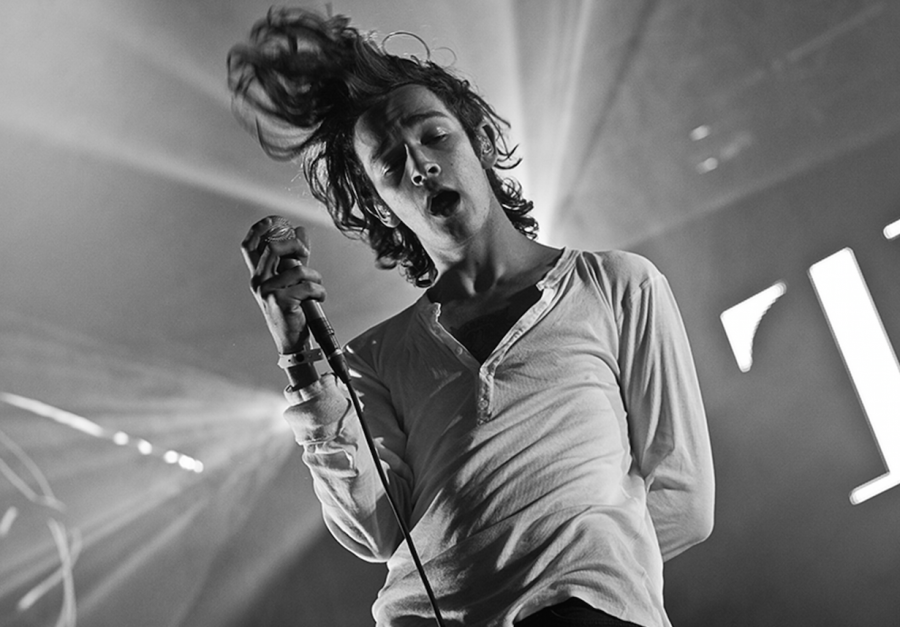 Out of the many albums released so far in 2016, no album fascinates me more than The 1975’s “I Like It When You Sleep, for You Are So Beautiful yet So Unaware of It.” I have yet to fully wrap my head around the music, but for now I can confidently call it my choice for album of the year.

It’s far from the perfect album. It’s not even an objectively ideal record to name the best of the year, at least upon first listen.

The biggest flaw of “I Like It…” is its glut. The 1975 is indulgent almost to the point of excess. The album already tries a listener’s attention span with its 17-song length, and its instrumental intermissions make the record feel longer.

“I Like It…” is instead a hot mess of a record, but it’s only a reflection of its chief songwriter, frontman Matty Healy. Inside his collection of flashy dance-pop, Healy opens himself to the most raw, intense and personal emotions.

One feeling I’m currently obsessed with from “I Like It…” is the feeling of distance between two people. I’m talking more spiritual than physical, though the latter quality still plays an important role.

The album title defines the exact amount of distance between Healy and a woman: they’re close enough to look into each other’s eyes, yet they can’t read too deep into what’s so fascinating about them. They’re beautiful to the eye, but is there anything underneath the surface?

“A Change of Heart” follows how such a question can yield different answers as time goes on and as people drift apart. The song can be explained in this pair of Healy’s lyrics: “You used to have a face straight out of a magazine, now you look just like anyone.”

The two adored each other so much, but they now look at each other so blandly and with disgust, with nothing redeemable in their gaze.

Seeing nothing but emptiness in someone’s eyes also gives me the chills in “She’s American.”

The relationship between Healy and his American fling is casual and shallow, almost to a hilarious degree: “If she says I got to fix my teeth, she’s so American.” Though he sells it as an electric experience that changes the whole outlook of a city, he eventually realizes it’s built upon a weak foundation with not much common ground.

“She’s American” is especially terrifying when I come to terms with the idea that Healy reveals one cold truth of human relationships underneath such a fun, upbeat slice of dance-pop.

A similar point can be made about the album’s lead singles, “UGH!” and “The Sound.” The piano-led beat of the latter pumps up a crowd, and the giddy riff of the former gets some dancing feet moving.

But “UGH!” shows Healy’s ugly, self-obsessed reflection, which may or may not be affected by drug addiction. He yaps his mouth enough to completely tune out the other person.

“This conversation’s not about reciprocation no more,” he remarks.

He goes off again in “The Sound,” admitting to loving himself more than he does his former partner.

“It’s not about reciprocation, it’s just all about me,” he quips.

It’s true: “I Like It…” is all about Healy. However, the album doesn’t focus on how lovely Healy is despite the narcissism. It’s about how crude his heart has become, and no one critiques Healy harsher than himself.

The vulnerable moments of “I Like It…” are the most emotionally crushing. He’s naturally stubborn in “Somebody Else,” yet it reveals so much of his pain when his attempts to be sincere bleed into his pettiness.

And there’s “If I Believe You,” the moment Healy hits rock bottom. He pleads for comfort from another person like he’s pleading for salvation. For a taste, here’s his confession and also my favorite lyric of 2016: “I’m petrified of being alone. It’s pathetic, I know.”

With all this talk about love and relationships, it begs the question: Is “I Like It…” romantic?

Sure, if you consider a strictly physical relationship as romantic. There’s nothing to suggest Healy’s relationships are supposed to be emotionally deep. I think he meant it that way too.

But it’s impressive, and often affecting, to me how much heartbreak and complicated issues come up from a supposedly shallow love.

Healy also surprises himself with how much the experience mattered. He thinks he’s above it all.

He assumes he can cope with his emptiness with more sex, drugs and one-sided conversation, but his misunderstanding is his biggest downfall.