The Daily Aztec • May 4, 2016 • https://thedailyaztec.com/77803/artsandlifestyle/new-flip-model-improves-learning/ 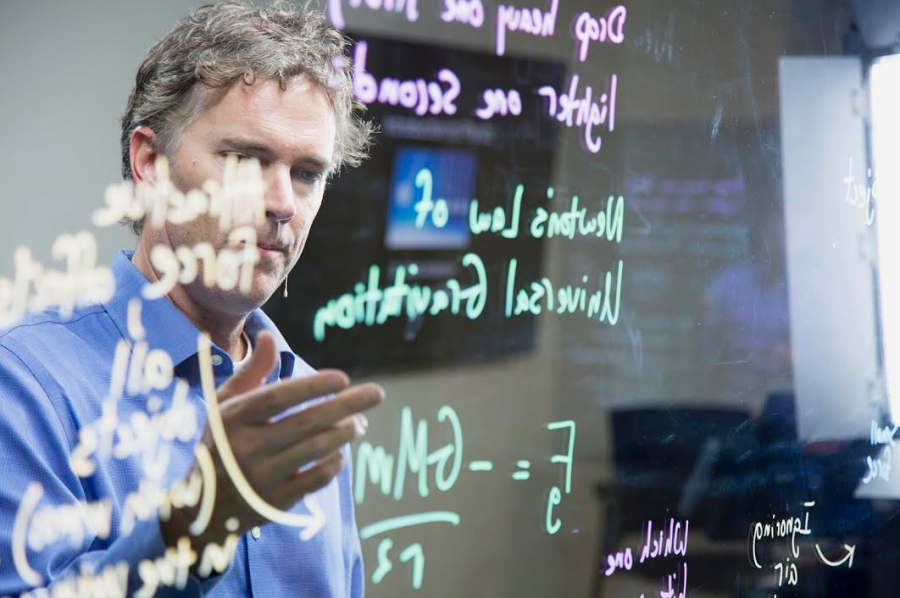 When applied mathematics assistant professor Antoni Luque came to San Diego State in January 2015, he decided to dedicate an entire semester to developing his research program on biomathematics and viruses that infect bacteria. During this same time, Luque began learning new ways to improve the classroom learning process for his students.

While attending many Center for Learning and Teaching workshops, Luque learned new initiatives promoted on campus. He took a workshop that taught him how to implement team-based learning, and from there he created a new class model.

But before Luque started his new class format, he knew he wanted to implement more active work in class and needed a way to provide the lectures and materials needed for team-based activities. The solution was found in physics professor Matt Anderson’s learning glass invention.

The learning glass is a glass board that allows instructors to write their notes on the board while facing students.

By combining team-based learning with the learning glass, Luque created the flip model class that allows students to access the lecture online and work in teams on exercises in class.

“When I saw (the learning glass), I thought ‘OK, this is exactly the technique I need if I want to flip the class and have the lecture accessible online and focus on working in class, so I get a better (understanding) of how people progress and what students get stuck on,’” Luque said.

He was also awarded a grant to keep refining the flip class model after demonstrating his accomplishments he has had so far with it.

In the summer, he will attend an institute with other CSU faculty who are working with similar models to discuss how to improve the flip class format.

After using this model, Luque noticed a decrease in the percentage of students who received grades of C- or lower compared to a normal lecture-based class.

Luque says he likes this model because students can breach their knowledge and provide alternative ways to approach problems by putting their heads together.

“I can’t provide in one lecture a diverse learning because I’m just one brain,” Luque said. “But if I craft five resources, I have a team of five people, so I’m using five resources that might optimize the learning of each (student).”

Luque has also noticed that team-based class model helps students learn better by teaching each other.

“When you have a student who just learned the technique, they might have a better way of explaining the nuances of how to solve a problem, whereas a lecturer who has mastered it might say ‘this is simple, you just do this and this and you have your answer,’’” Luque said.

Anderson believes Luque’s use of the learning glass is very popular and students seem to react very well to it.

“Whether the flip classroom model with the learning glass lecture delivery is the best approach or not, I have my gut feeling,” Anderson said. “I think it is.”

Luque says the ideal model of team-based learning coupled with the learning glass is to allow students to apply what they’re learning in class to the real world.

“We want to organize the class in a way that from day one, the student says ‘wow I am learning things that are building my background in math, and I know now that I can address these types of problems because these examples are practical problems I can use in a company, and I can solve it with this method,’” Luque said.

Luque said the flip class model not only benefits students, but it also helps him as a professor.

“When I go to class, I have the teams and they’re working and they’re invested, and while I’m walking around, they don’t want me to talk to them because they’re solving it on their own or some of them ask for help,” Luque said. “It is a very good interaction, I get to know the students better.”