The Daily Aztec • May 4, 2016 • https://thedailyaztec.com/77844/news/david-horowitz-to-visit-sdsu-college-republicans-club/ 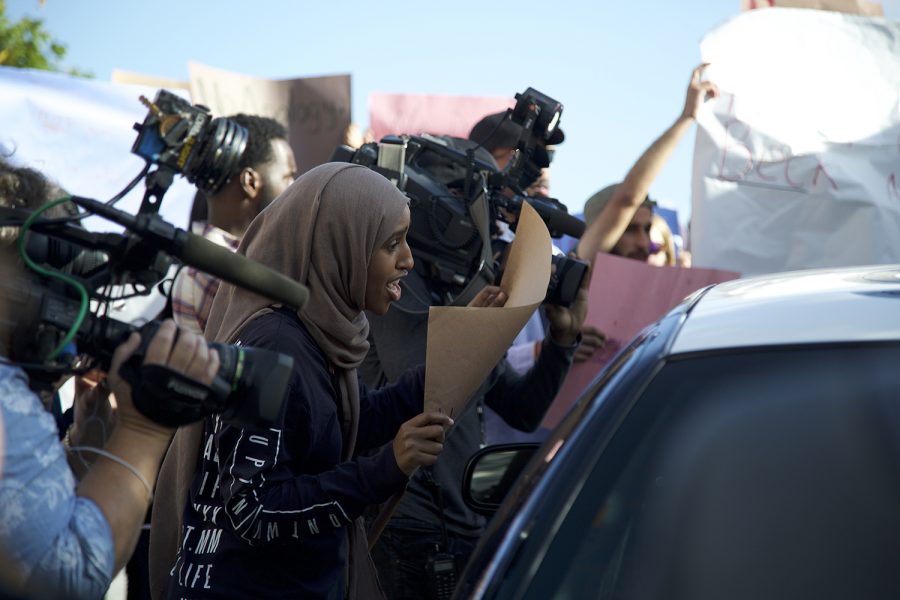 by Jocelyn Moran and Will Fritz

The San Diego State College Republicans club will be hosting a speaking engagement with David Horowitz on Thursday, May 5.

This event comes after recent campus protests regarding fliers put up by the David Horowitz Freedom Center. The fliers named student and faculty activists and said they were “allied with Palestinean terrorists.”

The College Republicans club said they have spent several months planning to have David Horowitz speak on campus, and the event will move forward despite the recent protest.

Last week’s protest occurred after SDSU President Elliot Hirshman sent out a statement via email to all SDSU students on Tuesday April 26 addressing the fliers.

In the email, Hirshman wrote that he fully supports the rights of all parties to voice their positions on political issues.

“First, we recognize and fully support the rights of all parties to voice their positions on political issues, whether supportive or critical. We also understand that when parties adopt a specific political position they become responsible for their actions and these actions may produce criticism,” he wrote.

Hirshman wrote in the email that individually naming students may discourage them from participating in political discussions.

Many students felt his statement did not strongly enough condemn the Horowitz Center’s fliers, which specifically target activists associated with the Boycott, Divest, Sanction movement.

Monique Dela Cruz, publicist for the SDSU College Republicans, said the David Horowitz event was organized before the protest and will continue to move forward, but she is unsure if Horowitz will address the issue.

The club wrote in a release that they were not aware of the flyers being posted on campus and do not know who is responsible for them.

Dela Cruz said they were warned of a 100-person march organized by the Muslim Student Union that will take place during the event.

In response to the warning, the club said they would not be silenced by the protest.

A post by the SDSU College Republicans on the Facebook event page reads, “While we believe in the right to peaceful assembly, based on past experiences we have reason to believe that their protests will be anything but peaceful. Just ask President Hirshman…We will do our best to ensure that anyone who wants to listen to Mr. Horowitz speak will be able to do so without being rudely disrupted.”

“I hope it is just a silent protest and I hope people realize he is just one small part of those advocating for Israel and doesn’t represent the whole,” said Jonathan Graubart, political science professor.

“(Students) can see Horowitz’s side on this issue rather than only seeing the protester’s side that we got last week,” Dela Cruz said. “They actually get to see him talk rather than see what’s on his website or what people may post about him in a negative light.”

The College Republicans’ statement explains that the difference between their club, the GOP and other clubs is that it stands by Israel as allies to the United States, similar to how the Republican Party has stood by them throughout history.

“Even when there are tensions between student organizations, the underlying message and theme throughout these events is that Anti-Semitism anywhere, especially on college campuses, is inexcusable,” the statement says. “BDS movement will always be contrasted by our allegiance to defending Israel and Judaism from verbal and symbolic attacks.”

“We reserve the right to utilize freedom of speech as we also recognize the same right to demonstrators and the right to peaceful assembly,” Dela Cruz said. “It will be interesting to see what will happen, we still want anyone to hear Horowitz speak and to be able to do so without being disrupted.”

David Horowitz defended his flyers and said the seven SDSU students named are “allies of terrorism.”

“SJP has one goal, and that’s to spread Hamas propaganda that’s designed to destroy the only Jewish state,” he said. “I would never put a student’s name on a list…but these aren’t students, they’re political activists.”

Miranda Koster and Anthony Berteaux, co-leaders of the Students Supporting Israel, do not support the flyers.

“It’s inappropriate, no matter how you look at it,” Berteaux said.

“Flyers like this have no place on our campus, and they need to be recognized for what they are, which is hate speech.”

On Monday, May 2, Hirshman, Associated Students president Jamie Miller, and several members of the administration met with BDS activists Osama Alkhawaja and Rachel Beck, two of the students named in the fliers.

Alkhawaja and Beck both reported that they were not entirely satisfied, and feel the issue is far from over.

“I feel absolutely betrayed by my university,” Beck said. “I pay $30,000 to go here, and they haven’t defended me from these accusations that I am a terrorist.”

“The thing that I don’t understand is, why is it so hard for you to come out and make a statement saying that your students aren’t terrorists?” Alkhawaja said. “The university continues to defend free speech, but this is hate speech.”

Alkhawaja reported that the university said they’re not willing to condemn the posters and say that they were hate speech or intimidation.

The SDSU College Republicans have not yet released exactly which room the event will be held in. They plan to announce it the day of the event, May 5.

The event page reads, “Protesters will NOT be allowed in. Students with a Red ID can sit in and listen peacefully and ask questions at the appropriate Q&A time.”

The only people who will be allowed into the event are people with a Red ID, or people on a predetermined guest list. Individuals who wish to be on the guest list can email sdsucr@gmail.com before the event.

This article has been updated to reflect that Miranda Koster and Anthony Berteaux, co-leaders of the Students Supporting Israel, not Students for Justice in Palestine.