The Show must go on 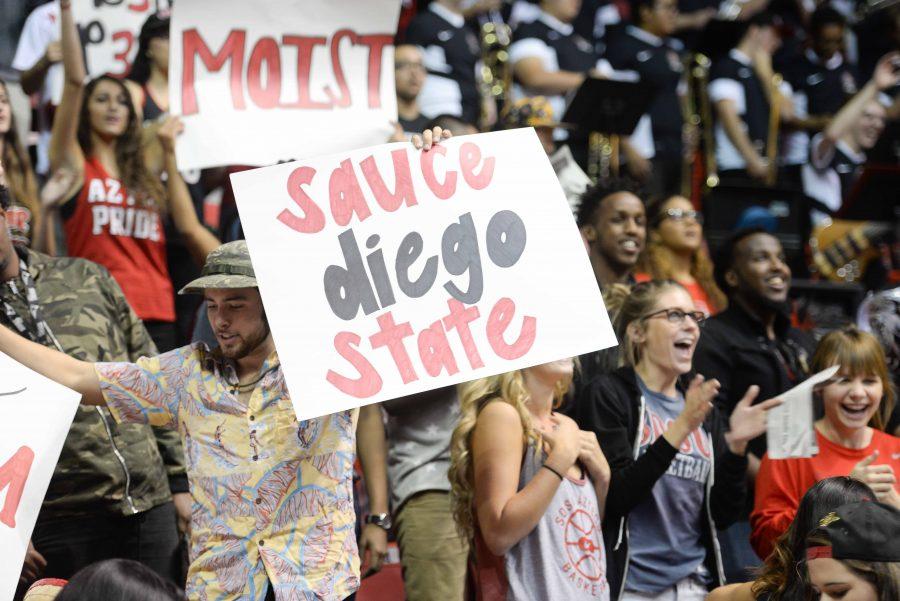 San Diego State has a lot of perks.

For sports fans, though, it may just be paradise.

SDSU’s student section, nicknamed The Show, has grown a reputation over the years for its performances at men’s basketball games.

In 2014, it was ranked as the No. 1 college basketball student section in the nation by Bleacher Report, and has garnered attention from several other national and local media outlets.

Things like waving distracting heads at opposing free-throw shooters, the “I Believe” chant and relentless vocal support has established the student section as a force against opposing teams.

The raucous gathering of students has been a catalyst for a men’s basketball team that has been to the NCAA tournament six out of the last seven years.

Fans can be as involved as they want in The Show.

Her first game came on Feb. 6, 2013, during her freshman year, when then-senior guard Chase Tapley drained a 3-pointer at the buzzer to defeat Boise State.

At that moment, a marriage was born.

“I remember my sophomore year, my friend and I would make sure to get in the first three or four rows for games and then we just got to know the people who always sat in the first two rows and they were really inviting,” she said.

After her sophomore year, Helmke became part of what most know as the leaders of The Show, the group of fans seen sitting in the first several rows of the student section at men’s basketball games.

For that group, it’s about more than just showing up and cheering on the team. Hours of preparation are put in so all fans have a great time at the game, not just the first few rows of the student section.

“A lot of people don’t know, but we’re the ones who print out all the chant cards for students to read, we pay for the banners that they raise over the student section every game and we buy the (faces) that people wave around,” Helmke said. “We just want to get as many people involved so they can have as good of a time at the games as we do.”

The group has become sort of a family for Helmke and the other members, as they travel around to see the team play in different venues and spend a lot of time together waiting in line for games to start.

In her eyes, it has shaped her time at SDSU.

He doesn’t always sit in the first couple rows at men’s basketball games like Helmke, and he does not religiously follow SDSU athletics.

Part of what he loves about the student section, though, is the fact that no matter how many games he goes to, he always feels connected.

“It doesn’t really matter where you sit in my opinion,” Anderson said. “Whether you’re in the first row or the last row, it’s a great opportunity to watch a high-quality team and support the school.”

Another interesting dynamic with The Show is its relationship with SDSU.

It’s not recognized as an official club and is independent from the athletics department and the university entirely.

“It’s an informal relationship where we both know each other and we’re able to bounce ideas off each other,” SDSU Athletics Director of Marketing Todd Greenbaum said. “Athletics and The Show are working toward the same thing, obviously. But they want the freedom to do and say things they may not be able to if they were an official club.”

Greenbaum said The Show has helped the athletic department by tweeting out when student tickets are being distributed through The Show’s official Twitter account and by enhancing the gameday experience for everyone in the arena.

“They really are great ambassadors for our school. We appreciate everything that they do,” Greenbaum said.

Both Helmke and Greenbaum agree it’s important students show the same level of support for other sports as they do for men’s basketball.

Especially with the reigning 2015 Mountain West champion SDSU football team, Greenbaum believes fans have a lot to be excited about for upcoming years.

Helmke, who will graduate in the fall, will not be a student for too much longer, but the legacy of The Show is a hot-button topic among its members.

“At the end of the day, we just want to find people who love sports as much as we do and are willing to put the time in,” she said.

Although the days of Helmke and her group of friends regularly going to sporting events may be numbered, as the old saying goes, “The Show” must go on.