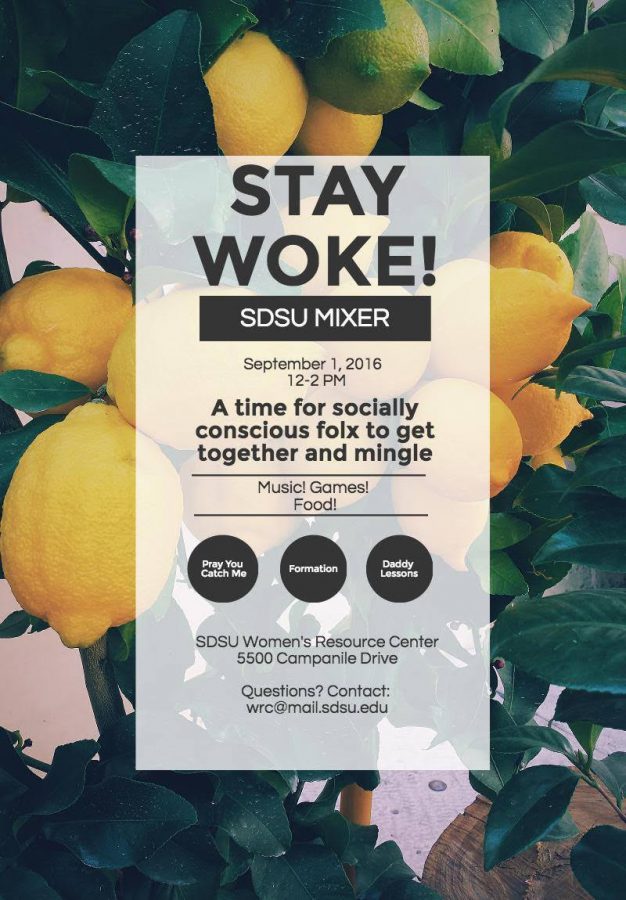 The start of a new school year can mean a lot of things. It’s a time to refocus, plan ahead and maybe most of all, a great time to meet new people.

San Diego State’s Women’s Resource Center is having a mixer from 12 p.m. to 2 p.m. Thursday, Sept. 1, at its location next door to the Pride Center on the corner of Lindo Paseo and Campanile. The “Stay Woke” mixer is a chance for socially conscious Aztecs to get together, mingle and have some fun before the fall semester starts to get too hectic.

The WRC, newly opened in spring 2016, sets its goals around building a community within SDSU that encourages critical conversations about social justice.

With its mixer, the WRC hopes to welcome some fresh faces through its doors and continue to promote itself as a safe and inclusive space for those interested in contributing to a feminist gender-conscious campus climate.

“We’re having some really hard conversations in here (at the WRC). We talk about violence a lot, we talk about sexual violence and racism, and it’s really painful to talk about those different (topics),” Marsela Rojas-Salas, a graduate assistant at the WRC and women’s studies graduate student, said. “Being able to heal through something fun is something that’s really important to us.?

The “Stay Woke” mixer will feature food, music and games. It is open to anyone who thinks they made be interested in talking or meeting like-minded socially conscious, feminist, and other social justice oriented people.

“I think that when we’re starting the school year it’s more difficult to find people that share and appreciate your same values,” Krizia Puig, a graduate intern at the WRC and women’s studies graduate student, said. “The most exciting thing about the mixer is that you meet people who you know for sure are on the same page (as you).”

After the mixer, the WRC has a number of other events and programs throughout the fall semester it’s promoting.

From 8 p.m. to 10 p.m. on Thursday, Sept. 8, the WRC will be hosting a comedy troupe called “Sex Signals,” at Montezuma Hall in the Conrad Prebys Aztec Student Union Theatre. The group uses role playing and improvisational comedy to stir meaningful conversation about sexual consent and sex positivity.

After the performance, the WRC will also be facilitating a session of “speed dating.”

“It’s not just for dating, it’s also meeting people and making new friends,” Rojas-Salas said. “It is geared toward first-year (students), but anyone is invited, and the event is during (SDSU’s) welcome week.”

The WRC is also sponsoring the Brave Project, a two-part, comprehensive certificate program on intervention and prevention of sexual violence. There are three different sessions offered and pre-registration is available online at the WRC’s website.

The program is free and any students, faculty, or administrators can take the class.

Interest in getting involved with the WRC has been increasing since the center opened last spring.

“We’ve gotten a lot of people asking how to get involved, so (the WRC) created the femtee/femtor mentorship program,” Rojas-Salas said.

The program is bounded in feminism, but is also for having fun, Rojas-Salas said.

The deadline to sign up for the feminist mentorship program is at 4:30 p.m. on Sept. 16. The application is a Google form that can be found here. Interested students can apply as a femtee- usually first or second-year students, or a femtor-third or fourth-year students or transfers.