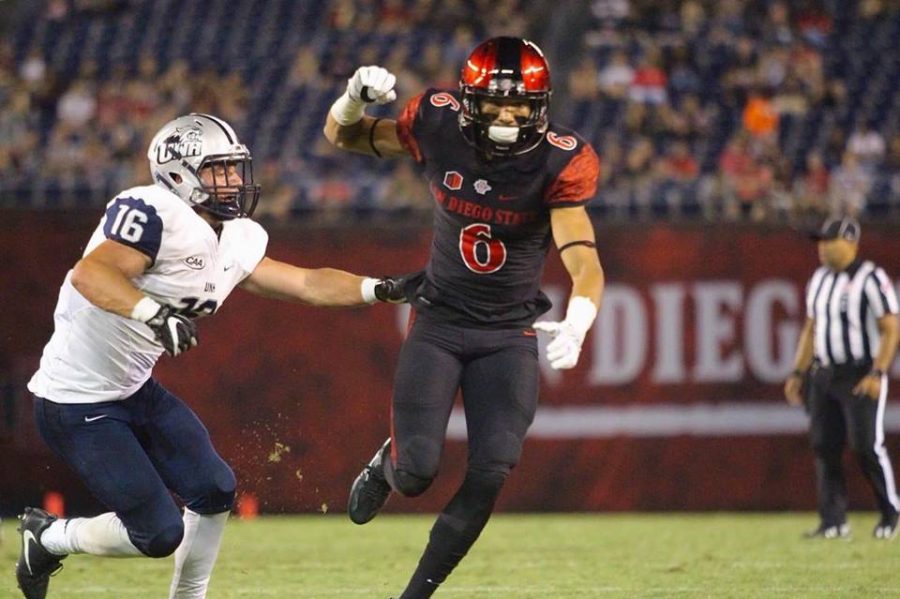 Senior wide receiver Mikah Holder bolts past a New Hampshire defender in a game during the 2016 season.

Anticipation was high, expectations were burdening and the post-game KGB Skyshow was prepared.

In short, the stage was set for the San Diego State football season opener, and it did not disappoint.

SDSU opened its 2016 season with a 31-0 win over University of New Hampshire, showing off the new features of its offense – even if only against a Football Championship Subdivision team.

The passing game was sharp, connecting on big gains and opening the door for long runs by senior running back Donnel Pumphrey and redshirt sophomore quarterback Christian Chapman.

A narrative that played out much differently during the 2015 season.

Part of that stemmed from the miscues by the offensive line, as head coach Rocky Long touched on after the game.

“Winning is the most important thing . . . there are some things that we have to improve dramatically. One of those is holding penalties – if we don’t get those holding penalties, we could have scored 50.”

The Aztecs committed nine penalties, which cost them 70 yards.

Much like last year, however, the Aztecs started slow, settling for three consecutive three-and-outs to begin the game, starting two of those drives inside the 5-yard line.

Those drives consisted of six rushes by Pumphrey and two incomplete passes from Chapman, showing remnants of the offense that plagued them in non-conference play last season.

“You have to give the opponent some credit,” Long said, “You can either give them credit or say the offensive line didn’t block well. I’d rather give credit than talk bad about a team that won the game 31-0.”

But the defense, which held strong similar to last season, and an abundance of offensive penalties and miscues made by UNH stalled the game.

An 86-yard touchdown pass from Chapman to junior wide receiver Mikah Holder on the first play of the fourth drive absolved any doubt, and sent the crowd of 46,486 into an early frenzy.

“The first catch was definitely needed for me,” Holder said, “when the play was called, I knew it could be either break or bust right there for starting the season off right.

“We had perfect protection, good throw and catch . . . I was just hoping to score, because I knew that I was gonna catch it.”

The connection, which marked the first completed pass of the season for the Aztecs, was 28 yards longer than any completion in 2015.

Holder had 121 yards on his first two catches. No SDSU player had 100-or-more receiving yards in the 2015 season.

In the first half alone, Holder accumulated 160 yards and two touchdowns on only four catches, a stat line that he would end with.

“It’s just a good pre-cursor for what the season will be,” Holder said. “We have really good chemistry . . . we have got a lot to look forward too.”

The second half had a slower pace, as the Aztecs went back to their running roots, rushing 22 times for 96 yards.

“Our team is a run-first team,” Chapman said, “thats what we’re gonna do – punch you in the mouth until it works.”

The final score of the contest came on a 1-yard rush by junior running back Rashaad Penny, his first score of the season and fifth career rushing touchdown.

Pumphrey rushed for 98 yards and one touchdown, marking his third consecutive game with under 100 yards rushing.

In all three games, the starting quarterback for the Aztecs was Chapman.

He would set a new career high with 283 passing yards going 16-for-25, exceeding the mark of 203 he set in the Mountain West Championship Game last season, and showing why he has been pegged by many as one of the best quarterbacks in recent SDSU history.

Long spoke about Chapman’s performance after the game.

“He can get out of trouble and do things himself,” Long said, “and he did that tonight. He is a lot more adept at knowing our offense and making changes at the line than he was last year.

I thought he had a really good first game.”

While the Aztecs had strong QB play, UNH did not – the combined attack of sophomore Trevor Knight and senior Adam Riese went 7-for-20 for 70 yards and one interception. The porous night can be accredited to the experienced defense lined across from them.

The vaunted Aztec defense did not produce any game-changing plays – it’s only forced turnover, an interception by senior safety Na’im Mcgee, came with 10:45 remaining in the game –  but it did everything right, allowing only seven first downs and 132 total yards and stopping the Wildcats on all 14 of their third down attempts.

Senior linebacker Calvin Munson led the way again, recording 11 tackles, two of them for a loss.

Despite the shutout victory, he was unhappy with his team’s attitude.

“We just thought it was going to be handed to us and that just wasn’t the case,” Barrett said.

Long agreed with Barrett’s sentiment, and looked forward to next week’s matchup.

“I’m not sure we outplayed New Hampshire that bad,” Long said, “We just have a lot better players. But Cal is going to be a better football team because they have better athletes.

We better play pretty good if we want to have a chance to win.”

SDSU will host University of California-Berkeley on Saturday, Sept. 10.