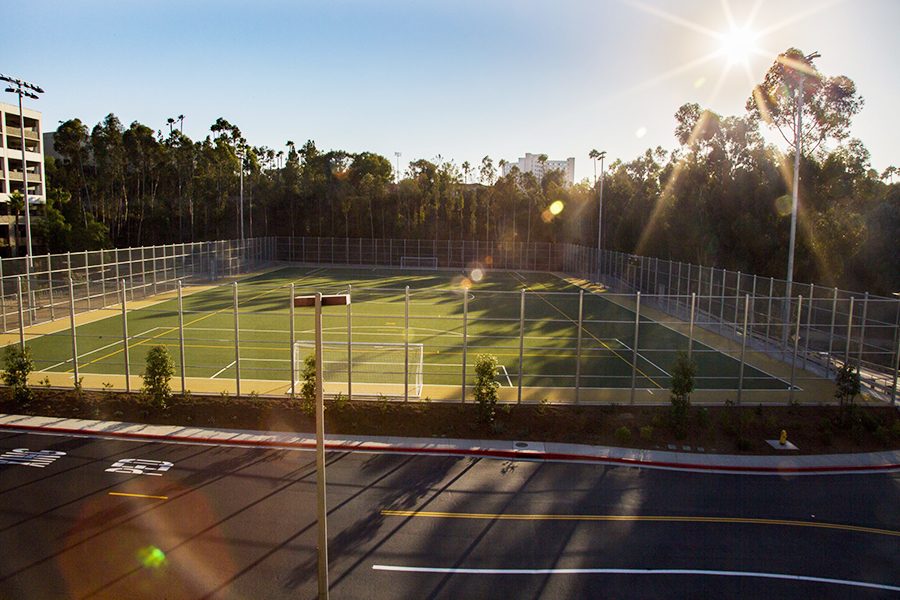 Associate Director of Programs Pam Mahlow said intramural programming will be added along with morning yoga class hosted at the field because of the high waitlist for flag football and soccer programs.

“We are really excited to have this turf because it is a new technology that has a cooler feel,” Mahlow said. “Having another field for students to be able to enjoy for programming and to come out and kick a ball around will be a great thing to add to the university.”

Double doors were built to make Scripps Cottage more accommodating for event needs. The doors connect the inside of the building to the outside terrace.  A new, accessible restroom was also installed and is available to guests both inside and outside of the building.

The new complex for the engineering and interdisciplinary sciences departments will be a U-shaped building with a courtyard in the center.

“This building was created around the idea that researchers from different disciplines can work together around a topic to solve problems,” said Laura Shinn, SDSU director of planning. “Labs are flexible so they can be reconfigured depending on the topic.”

The complex will include seven of the following teaching labs: mechanical engineering, civil engineering, and aeronautical engineering. It will also include a Research MRI machine that is scheduled to be moved into the building January 2017.

“The MRI is used to do brain imaging,” Shinn said. “It is so large that the complex needs to be built around it.”

A creative design studio where students have the opportunity to build will be housed in the complex.

The building is planned to be completed in January 2018 and has a total project cost of $90 million dollars, Shinn said.

The South Campus Plaza will consist of two residential mixed-use buildings and a parking structure dedicated to retail and green space.

Student housing in the plaza will be double or triple occupancy and will accomodate 600 students. The second floor will have a variety of program space and roof terraces accessible to students.

The plaza will be the second dorm, after Zura, to have gender-neutral bathrooms accessible to residents and their guests.

“Restaurants in the plaza will include Broken Yolk and Eureka and retail will include Trader Joe’s,” said Eric J. Hansen, director of housing administration.

“It has a lot smaller carbon footprint, uses less material and resources and is more sustainable,” Lyne said. “It is the way of the future.”

The two towers are scheduled to be finished on Dec. 30, 2016 and the parking structure will be finished in April 2017, Lyne said.

The plaza has a total project cost of $143 million dollars, Shinn said.

Lindo Paseo, which is currently closed off due to renovation, will re-open in April  2017.

Students will be relocated from the Tenochca Residence Hall to South Campus Plaza dorms for the Spring 2017 semester in order to begin renovations in Tenochca.

“We at SDSU believe the physical environment can have a big impact on student’s ability to learn,”  Hansen said. “We are trying to create environments that support that effort.”

New monuments are being built on Campanile Drive at the main entrance of campus. It will have a bronze seal with the official SDSU logo and clay tile roofs.

“A year and a half ago we started looking at what we could do to improve the image of campus and give our visitors a sense of where they are,” Shinn said.

The project was supposed to be completed before the fall semester began, but will now be complete on Oct. 10 and has a total project cost of $1.4 million.

“There are a lot of studies that talk about how a sense of place and ownership makes people feel safer because they know where they are,” Shinn said.

At the same location, pedestrian and traffic improvements are being made.

The sidewalks and curve ramps are being reconstructed to ensure that they accommodate people with disabilities.

The Centennial Mall is an effort to try to save water across campus and look for different landscape alternatives to turf, Shinn said.

Removing the turf will save 150,000 gallons of water per year, Shinn said.

Drought tolerant, low ground cover (decomposed granite) will be included in the project. Tables, chairs and trees will also be inserted in order to provide for a cooler seating option.

The project is expected to be finished in September and is projected to cost $300,000.

The Aztec Student Union lounge includes restaurant booth seating, high top tables and collaboration stations with a television centered on the wall so students can pair up to four laptops at a time.

Students indicated that they wanted more study space in the union in a survey, vice commissioner of operation for the Aztec Student Union board, Vanessa Girard said.

“I think this space is going to offer students that edge of diversity to campus where they can come here and do anything they need to do,” Girard said.

The lounge also includes a sustainability wall that illustrates consumption of electricity, water, solar electricity, steam, cooling and natural gas on an hourly basis in the student union.

The lounge is open from 7am to 10pm across from the MTS trolley station and The Habit in the Student Union.

The Confucius exhibit is an interior renovation project located in the first floor in the Professional Studies and Fine Arts building.

It will be a hall for Chinese art and culture and will include movable display cases.

“An organization known as the Confucius Institute that does programming and exhibits on Chinese art and culture has a big outreach component with events to educate people,” Shinn said. “They like to bring in rotating exhibits and didn’t have space to do it.”

The project will also consist of restrooms, a new door, windows and outdoor landscaping for the new entry restrooms.

The Confucius project will be finished May 2017 and has a total project cost of $4 million.

A concession stand will be built in front of the Cal Coast Credit Union Open Air Theatre and two temporary concession stands will be removed. A building specifically for accessible restrooms will also be created.   The theatre is expected to be finished in March 2017 and is funded by Associated Students.

Shinn said she is  scoping for future electrical infrastructure projects.

She said she will be checking on the university’s substations, transformers, and underground duct banks.

“We put in a request with the state and are waiting for confirmation of funding,” Shinn said.