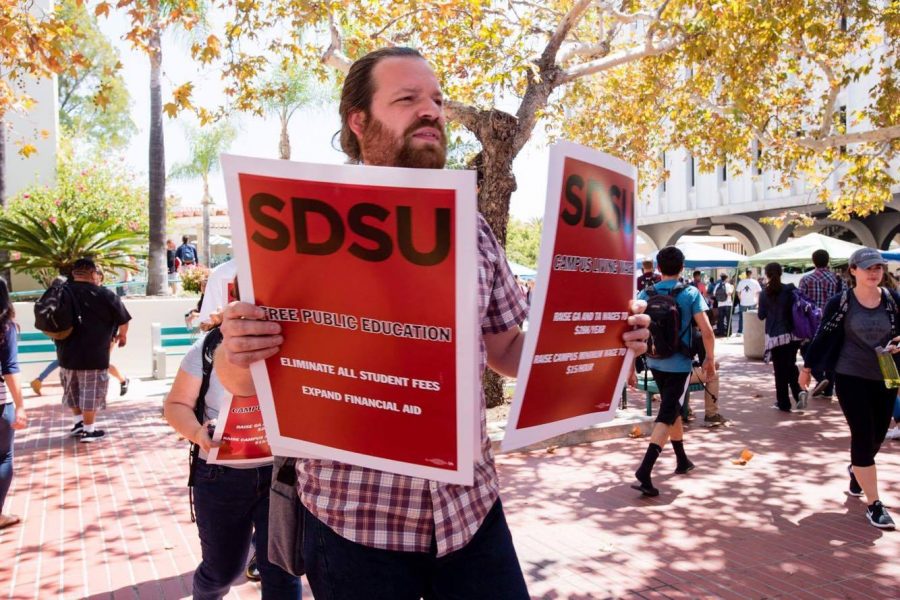 Chants of “fees must fall” and “higher wages, lower fees, let’s end student poverty” filled the air on Sept. 8 as nearly two dozen graduate student workers gathered to protest the state of their wages and benefits.

The graduate students met north of the library at 11:45 a.m. and marched for nearly an hour.

Their demands include raising grading assistant and teaching assistant salaries to $28,000 a year, raising the campus minimum wage to $15 per hour, free public education, elimination of all student fees and expansion of financial aid.

This comes ahead of the expiration of academic student workers’ contract with the California State University on Sept. 30.

“I work two jobs and I’m barely getting by,” a grading assistant for the History department, David Hollingsworth said. “We’re all working multiple jobs and working as graduate students. It’s just a lot to try and balance. I want to support this, but I also need to support this.”

A student at San Diego State’s Osher Lifelong Learning Institute, Bob Thomas, said teachers assistants and graders do important work. “I think the TAs and GAs should get a raise because the cost of living is so high,” Thomas said. “I know the teachers threatened to strike … I don’t think it needs to come to that as long as they fairly bargain.”

The UAW, which represents academic student employees throughout the California State University system, is currently negotiating a new contract with the CSU.

With one more bargaining session remaining before the current contract’s expiration, UAW Local 4123 President Sandip Roy does not seem optimistic about an agreement being reached.

“They (CSU leaders) are quite frankly insulting us with their offers,” said Roy.

The union has requested an annual 10 percent pay increase over the next three years, “which isn’t all that much considering they all make less than a thousand dollars a month,” he said. According to Roy, the CSU’s offer was a 2 percent annual salary increase over the same time period, which the union rejected.

“Call me crazy, but I don’t think these are the kind of increases that are going to stop student poverty.”

However, there is still much more of the bargaining process to go through before anything drastic happens.

Although the current contract expires on Sept. 30, Roy said the union will have the option to extend it in order to continue the bargaining process in the event both parties are unable to reach an agreement before then.

The other option would be to declare an impasse and go through a mediator, which is an option the union will retain after each extension of the contract.

Should a mediator be unable to resolve the dispute, a fact-finding commission will be brought in to determine the feasibility of both parties’ offers.

The fact-finding commission’s recommendations, though, would be non-binding, so even if the commission determined the union’s requests are in fact feasible, the CSU would not be required to grant these requests, Roy said.

Language in the current contract says the union will prevent unit employees from striking because it would affect the operations of the CSU.

But, according to Roy, this is standard in most contracts between unions and employers and it would go out the window if both parties are still unable to reach an understanding after the fact-finding stage.

If this happened the union would legally be able to organize a strike.

“It’s not something we are looking forward to doing, but it’s definitely an option,” Roy said.

Even with the union barred from strike action at the moment, there is nothing in the contract to prevent individual student workers from organizing on their own, so it is likely there will be more protests.

Bo Elder, a graduate student and community activist, said another protest is already planned for the same location and same time on Thursday, Sept. 15.

“We have been talking to them for a year now, and they’ve said ‘we’re not going to give you a raise,’” he told fellow protesters during Thursday’s rally.

“We have to make a credible threat,” he said.

Elder also said graduate students will be speaking out at the CSU Board of Trustees meeting at CSU Long Beach on Wednesday, Sept. 21.

SDSU Chief Communications Officer Greg Block said the university did not have a comment on the matter.