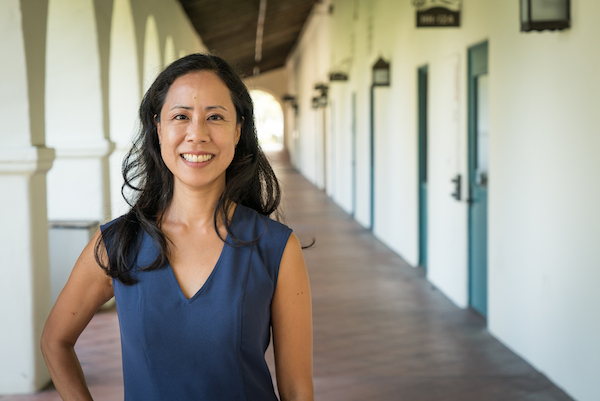 Lianne Urada is a new assistant professor in the San Diego School of Social Work, but she’s also an traveler and an activist with a specific focus on marginalized populations.

Urada focuses on issues centered on high risks in marginalized populations. Her specific attention is on women, specifically those involved with the sex trade. She developed this interest as a graduate student while on a six-month fieldwork internship in the Philippines, where she conducted outreach to the women and children involved in the red light district.

“Going to the Philippines as a college student was a transformative experience because I had never really traveled before,” Urada said.

During her travels, Urada was exposed to realities of HIV and poverty.

“When you see 2,000 young girls coming from rural areas where they must support siblings or children by working in bars, karaoke centers, and massage parlors in Manila, you cannot deny the reality of how poverty, public policy and global inequities play in the lives of all these women and youth,” Urada said.

Ever since her trip to the Philippines, Urada focuses on social work with a macro perspective.

“I realized you can’t just work in a vacuum only examining individual and family issues,” Urada said. “There are also these larger structural issues that are affecting the individuals.”

Her research now focuses on community engagement and mobilization. These issues are centered on health disparities in marginalized populations, substance use and low-income countries.

“(Urada) brings a wealth of research experience in her work with people who use substances as well as around her work in community mobilization,” School of Social Work director Melinda Hohman said.

Urada also has a California license in clinical social work with over seven years experience working directly with women, men and communities impacted by HIV/AIDS in Los Angeles County. She is currently on the board of directors for Christie’s Place, a non-profit organization that provides HIV/AIDS education and support to women, children and families impacted in San Diego County.

Urada also recently served as a technical review committee member for the United Nations Population Fund, reviewing studies on the prevalence of violence against women in the Pacific. She has over 25 publications on women and men involved in sex trade and sex trafficking in the Philippines, Russia and Latin America.

With her vast experience in the field, Urada has made an impression on students as their professor.

“You can tell she is passionate about her work in the field of social work and public health and wants to help students learn and grow anyway that she can,” social work administration and community development graduate student Kayla Baker said.

Urada will be teaching social work practice: organizations and communities next semester.

“I’m using this time now to plan how I can give those transformative experiences to students because that’s what struck me when I was a student,” Urada said.

Urada said that she looks forward to inspiring her students with examples from the field and speakers from the community doing transformative work. Baker is currently working alongside Urada to publish a paper involving her work in Tijuana with substance using women in the sex trade.

“She has been very helpful and inspiring throughout the process of writing a publishable paper and I have learned a lot from her thus far,” Baker said.

In one study alone, there were over 300 women involved in the Tijuana sex trade. Not only is Urada a professor, but a clinical social worker working candidly with the people that matter in the places that need the most attention.

Whether she is labeled as an activist, social worker, traveler or professor, Urada has made a name for herself in the lives and communities she has impacted.