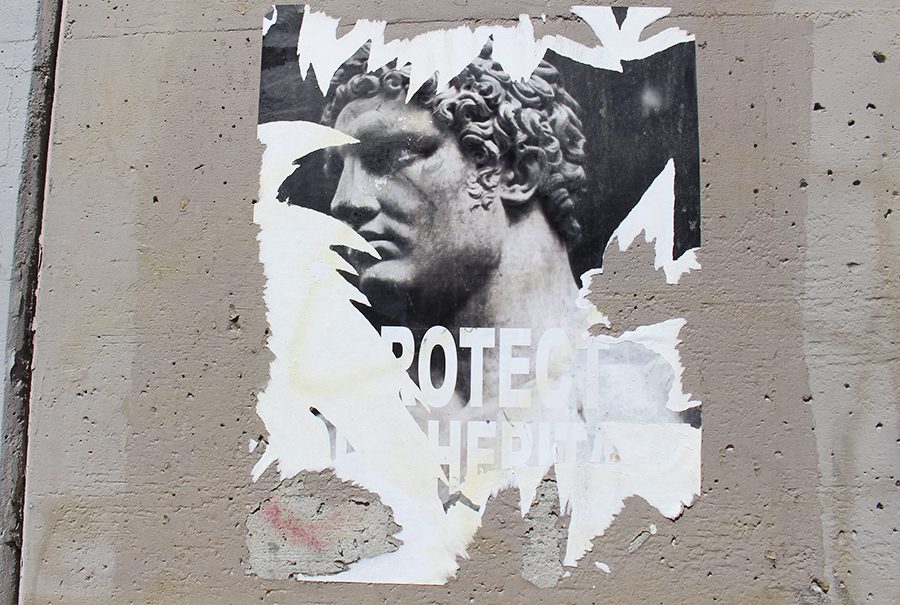 Over the last few weeks, several students have noticed distinctive fliers, posters and stickers appearing on campus. The posters typically feature a Greek or Roman statue with a slogan underneath, saying “Protect Your Heritage” or “Serve Your People” or “Let’s Become Great Again.” The stickers have an inverted triangle with three internal lines meeting at the center-point.

Senior Jeremy Zaida said without the slogans, it might be easy to mistake them for part of an art or design project. But they are actually materials distributed by Identity Evropa, an “identitarian organization dedicated to promoting the interests of people of European heritage.”

For those who have not seen the materials, it is likely because they are being removed by people on campus who say Identity Evropa is affiliated with white nationalism and white supremacy.

Zaida is one of the people who has noticed and removed many of the materials.

“It’s a bigoted message, definitely,” he said. “Because we’re rated as one of the most diverse campuses, it seems surprising to us that there could be such an extreme right-wing group here that is putting forth these racist and bigoted ideas.”

He has seen the posters and stickers in several locations: the bulletin board outside the SDSU bookstore, in the 24/7 area of the library, on poles by Storm Hall and on the wall of Parking Structure 7.

He removed several of the materials, and said he has friends who do the same.

“We don’t want this propaganda and nastiness on our campus,” Zaida said.

Reinhard Wolff is a member of Identity Evropa and an SDSU alum. Given the controversial nature of his work with the organization, he confirmed “Reinhard Wolff” is a pseudonym, but he was able to provide verification of his previous enrollment at SDSU. He graduated in May 2016 with a degree in social sciences. He says that Identity Evropa is not a white supremacist organization, but one that focuses on and defends white identity in America.

“I will confess that we are profiling,” Wolff said. “We are mainly targeting white guys, that’s the demographic that’s going to be the most receptive to our message. The students we’ve spoken with for the most part have been at least open-minded.”

He said that holding these controversial views can make it difficult in an academic or work environment, which may be why no SDSU students have applied to join Identity Evropa.

“I think it’s very hard to deny there are ongoing efforts, especially on campuses, to deconstruct and essentially destroy the white identity,” Wolff said. “ We’re not white supremacists in the sense that we feel like we’re just way better.Essentially we believe all people of any race, of any ethnicity have the right to self-determination in a homeland.”

He said when discussing the “homeland” of America, it can get tricky.

He said because of the diversity of the country, he thinks America is no longer a cohesive nation.

He has another solution: ethnostates.

Wolff said he and others in Identity Evropa believe ethnostates, or areas occupied overwhelmingly by people of one race, would be an ideal solution.

“We believe we want to have an ethnostate that is for Europeans and consists overwhelmingly of Europeans,” he said. “I don’t think the ethnostate needs to be a hundred percent European, I’m fine with it being like, I don’t want to toss out a number, but it would be overwhelmingly European.”

He emphasized that the idea of an ethnostate isn’t only for Europeans, but that all races would have their own areas.

Wolff clarified that he believes multiculturalism is having a negative impact on society.

“These benefits of multiculturalism remain elusive and when people of European heritage risk losing control over their homelands and the future of their people, other issues arise,” he said. “The cons outweigh whatever potential benefits there are.”

Wolff referred to studies which he said show evidence that multiculturalism is a detriment to society in several ways.

“Free speech is allowed on campus so these people have a right to put up these posters, and we also have the right to take them down,” Zaida said. “Another form of free speech is being able to do that against them.”

The university has traditionally defended the rights to free speech, which has previously incited controversy regarding other materials posted on campus.

In a message sent to all students on May 3 regarding anti-Boycott Divest Sanction posters, President Elliot Hirshman wrote, “We also wish to explicitly note that we strongly endorse our university policies protecting freedom of expression.”

Zaida said he thinks the administration should only take action if there is more of a targeted, harmful effort towards people on campus. He has also struggled with whether or not to take action.

“It’s a fine line you have to walk,” he said. “I want to let people know this is happening on their campus, this is something they should be concerned about, but at the same time, I am worried about spreading these people’s ideas. Especially since I think they kind of thrive on being pushed against. They think resistance to their movement makes their movement stronger.”

There is one thing Zaida and Wolff agree on.

This is a war.

When speaking about the potential harm Identity Evropa could cause, Zaida said, “At this point, it’s more of a war of ideas. These people have this idea, other people have another idea and right now there’s a clash.”

“We’re essentially fighting a cultural war for our own survival and the survival of our civilization.”