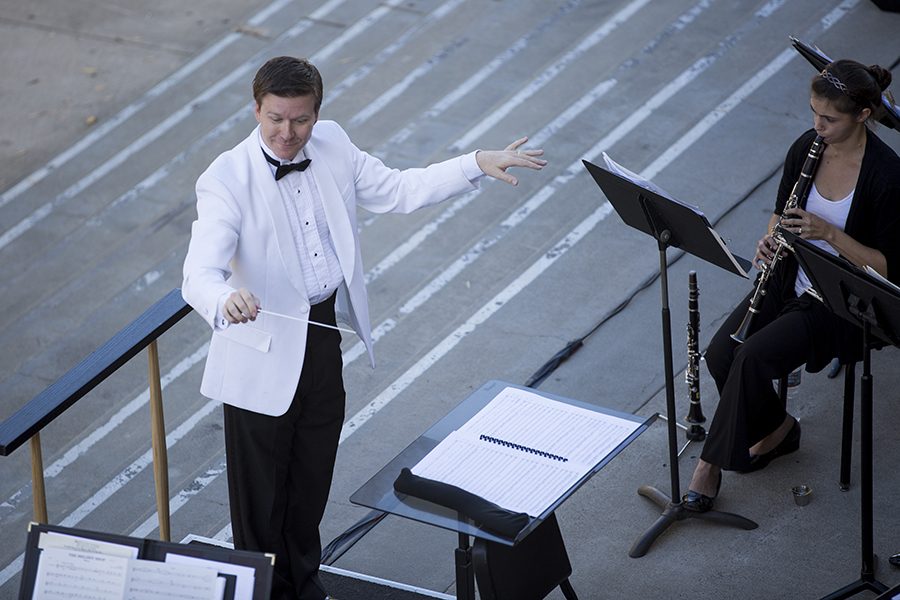 Wherever the wind takes us is always a tossup.

The wind symphony of San Diego State performed a free outdoor concert on Oct. 9 at 4 p.m. at the performing arts plaza.

“I thought the concert was a fantastic example of the excellence of the musicians at SDSU,” criminal justice sophomore Katherine Endsley said.

Instead of taking an ordinary paper and pencil midterm, the wind symphony held a concert instead. There a two concerts a year, corresponding with midterms and finals.

Director of Bands Shannon Kitelinger is the conductor of the wind symphony and symphonic band.

“I want to challenge students and create a professional ensemble atmosphere,” Kitelinger said. “The music was chosen so that the audience would be able to latch onto it and we always have a very enthusiastic audience.” Kitelinger said.

Although the main theme of the concert is enjoying the great outdoors, there is also an underlying theme about heroes. The wind symphony performed eight pieces with two main songs aligning to the heroes theme including “Summon the Heroes” and “Red Cape Tango.”

“I choose the music to challenge the students at a professional level and to try to prepare them for the real world,” Kitelinger said.

“Summon the Heroes” relates to the Olympics and “Red Cape Tango” is about Superman dancing with death. To create program, Kitelinger chooses the music first and then finds an underlying theme to tie the pieces together.

“Red Cape Tango was my favorite part of the concert because it’s a part of the Metropolis Symphony and I’m a comic book nerd, Endsley said. “The composer is a fantastic and (I think) the wind symphony got the message across that I think the composer wanted.”

In the Wind Symphony, there are 45 students who play a variety of instruments. Some instruments included are in the wood-wind, brass and percussion families. Trumpets, drums, flutes, clarinets and others were all part of the show.

“Keeping 45 people all together and combining different musical ideas into one cohesive idea are the biggest struggles with conducting the symphony,” Kitelinger said. “The students are very good and strong individuals with so many ideas. It is my job to focus them all into one place for a unified presentation.”

Although outdoor concerts are not common, Kitelinger wanted to achieve the feel of having a concert in the park.

Wind symphony is the top concert band offered at SDSU and students have to audition to gain entry. It is open to all majors, including non-music majors.

“The group is strong enough to play in a concert hall, but we don’t have one so we play in all different kinds of venues which is a fun experience,” Kitelinger said.

The next and final concert for the bands will be Sunday, Dec. 11 in the Don Powell Theatre. Student tickets cost $10, tickets for seniors and active military cost $15 and general admission tickets cost $20.