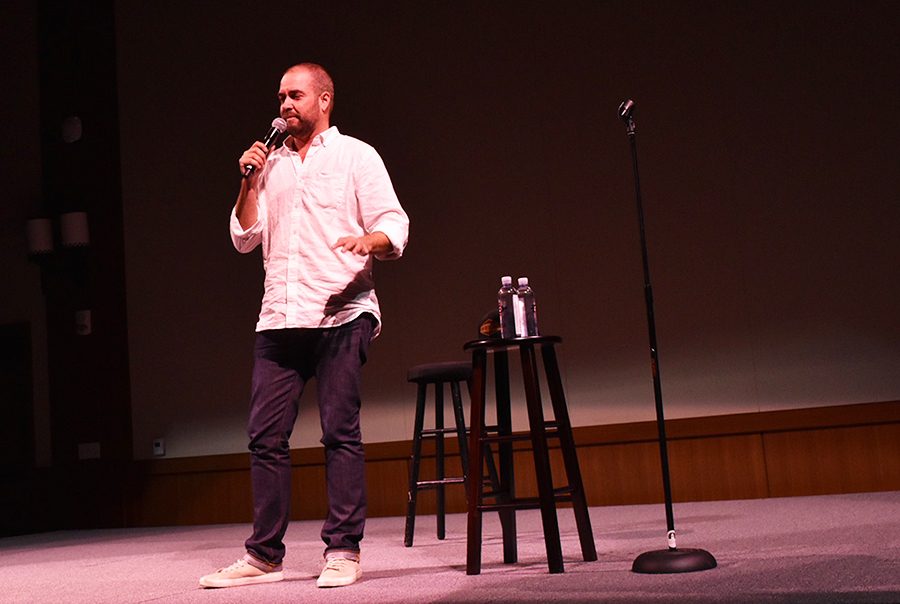 On Monday, Oct. 10 at 7 p.m. Montezuma Hall hosted Ian Harvie and a night of stand-up comedy.

Harvie is an openly-transgender comedian, actor and writer who has been featured in many television shows, including “Transparent” and Young and “Hungry.”

He was brought in to speak by San Diego State’s Pride Center, in honor of National Coming Out Week, which is Oct. 10 – Oct. 14.

“At the core of the show was a serious message that everyone needed to hear, but it was presented in a fun and enjoyable way,” freshmen biology major Tori Mudd said.

Harvie covered many adult topics throughout the show including the “scary” presidential election and his support for Hillary Clinton, but he mainly focused on his experiences as a transgender male. He used those experiences to relate to the many members of the LGBTQ+ community in the room.

Harvie grew up in conservative Maine and said he felt as though he did not see himself reflected in many people there. He said he came out twice to his family, once as a lesbian and then again as a transgender individual. Harvie said he was lucky, because his coming out was received as he said it should be: with support.

Harvie then shared the memorable and comical story of choosing his new name. He said he was in a TJ Maxx, standing in the men’s section and had his friend shouted male names across the store until one felt right and he wanted to respond.

Harvie said that everyone has a place and a purpose in life, but it just might take a while to find.

When he moved to Los Angeles, Harvie said that he saw “transgenders” everywhere, in the form of anyone who had plastic surgery. Meaning, in his eyes, lip fillers and a sex change were the same. Both were surgeries used to make individuals feel more beautiful. Harvie said that we are all the same.

Harvie also touched on subjects that were impossible to make comical, such as the daily murders of transgender females, especially those of color, around the country. He also brought up the unfairness of the anti-trans bathroom bills being debated in many states, as those bills were mainly aimed specifically at transgender females.

Harvie said that his past as a woman, coupled with him now being a man, made him a much better man. He spoke about how men often get free passes and said he was trying his best to set a good example for males everywhere.

Between jokes Harvie often explained terminology that may have otherwise been confusing to heterosexual individuals. He also spoke about how to be an ally of the LGBTQ+ community, making his show both entertaining and educational.