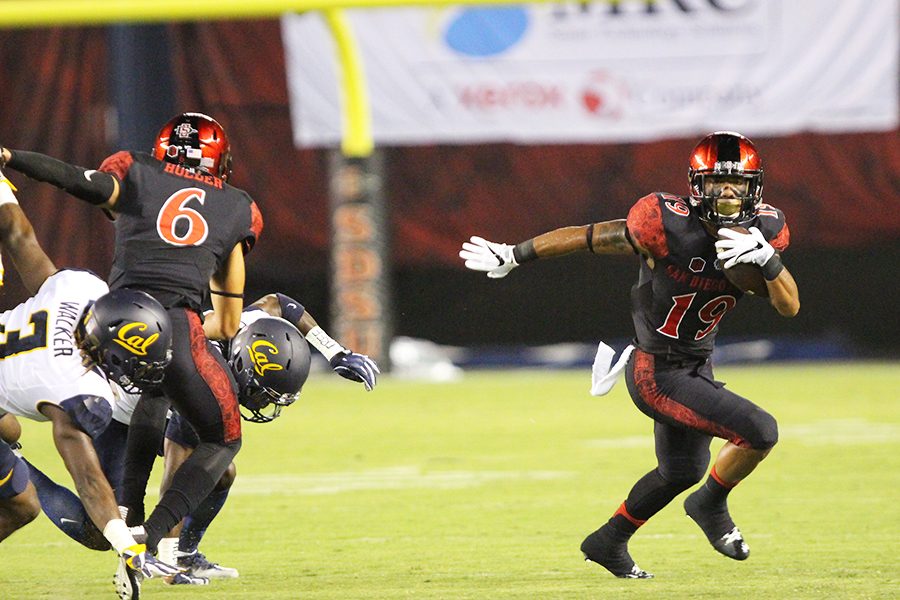 There is nothing sexy about a 17-3 win.
But it did not have to be for San Diego State football, which extended its Mountain West Conference winning streak to 13 games by defeating Fresno State on Friday night.
The game was nearly a carbon-copy of the Aztecs’ 26-7 win over UNLV last weekend, as they leaned heavily on senior running back Donnel Pumphrey and their experienced defense to maintain control.
Pumphrey tore up the Bulldogs defense for 220 yards on a career-high 38 rushes and two touchdowns, giving the FBS rushing leader 1,111 yards on the season.
The defense, meanwhile, held the Bulldogs to only 217 total yards and forced three turnovers – all interceptions.
The win and puts the Aztecs’ record at 5-1, and 2-0 in the MW.
SDSU’s game plan was clear from the onset, as the defending MW champions went 75 yards on 12 plays – 10 of which went to Pumphrey – on the opening drive.
The Aztecs were stopped at the 1-yard line on a fourth down run by Pumphrey.
The SDSU defense, however, asserted its dominance early and forced a turnover on the first defensive possession for the second straight game.
Senior cornerback Damontae Kazee intercepted a pass from redshirt freshman quarterback Chason Virgil on what was the third play of the drive. The pick was Kazee’s third of the season and 13th in his career.
The Aztecs capitalized on the great field position, taking a 3-0 lead on a 47-yard field goal off the boot of sophomore kicker John Baron II.
Baron has now made three consecutive field goals from 47 yards or beyond after kicking a 48- and 50-yarder last weekend.
Pumphrey would later in the half punch it in from two yards out, the 55th rushing touchdown of his career, and the last SDSU score of the first half.
Pumphrey rushed 21 times for 117 yards in the first half, outgaining Fresno State by 43 yards and helping the Aztecs take a 10-0 lead.
His first-half performance saw him eclipse 1,000 yards for the third consecutive season.
Despite this, Fresno State was still within striking distance – a position it would be in for most of the second half.
The Bulldogs opened the scoring in the third quarter, knocking through a 39-yard field goal to close out a 13-play drive.
But the Aztecs put together their own extended drive, capped off by a 13-yard score from Pumphrey, giving them the 17-3 lead.
FSU threatened one more time, via a 49-yard completion from Virgil to sophomore wide receiver Jamire Jordan put the offense in SDSU territory. But a sack from senior defensive end Kyle Kelley and an interception by junior cornerback Kameron Kelly ended the Bulldogs final hope.
SDSU had three drives that lasted five minutes or longer, and four that took 10 or more plays.
This strategy significantly minimized the passing game, as redshirt sophomore quarterback Christian Chapman recorded career lows in completions and passing yards in the victory. He finished with a 7-for-12 night and 72 yards without a completion to a wide receiver.