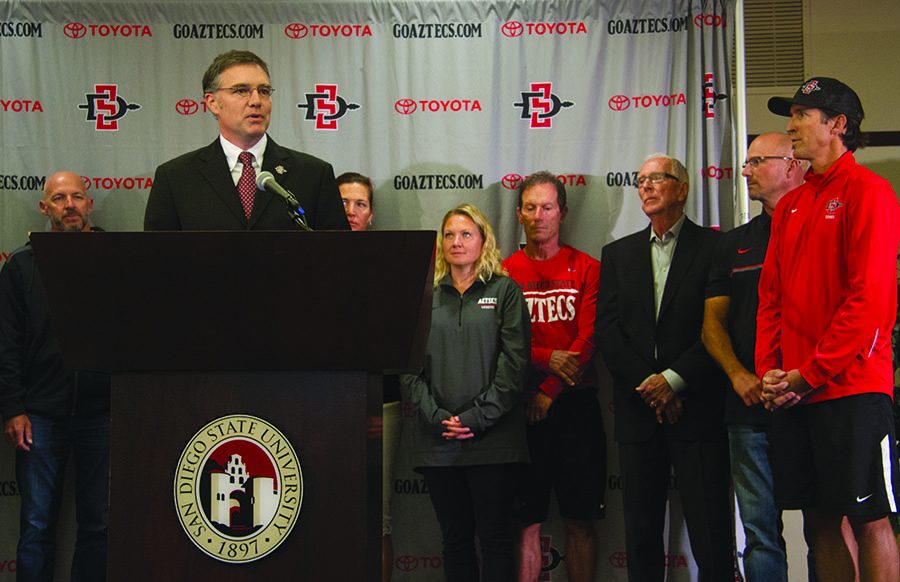 After what President Elliot Hirshman said was an “intensive national search” over the last six weeks to fill the vacant Athletic Director position, Hirshman introduced John David Wicker as the new San Diego State AD at a news conference on Oct. 24.

The arrival of Wicker is in turn a homecoming, as he worked under former AD Jim Sterk, who left SDSU for an identical position at the University of Missouri.

Wicker was Sterk’s deputy AD from June 2011 until his eventual departure in July 2015 for a similar position at Georgia Tech.

“We envisioned someone who cares about student athletes, whose integrity is paramount and whose competitive fire will inspire greatness,” Hirshman said of the decision to hire Wicker. “In short, someone who embodies our ideal of ‘winning it right.’ John David Wicker is that person.”

Wicker will be taking over for Interim Director of Intercollegiate Athletics Jenny Bramer, who Hirshman said will be a “critical part of our leadership team moving forward.”

“It feels great to be back on the Mesa,” Wicker said. “I loved my four years here with the coaches, the staff and all the student athletes. I’m thrilled with this opportunity and I am looking forward to helping SDSU athletics move to the next level of success.”

The ascenion to the “next level” is a less than arduous road for the new AD compared to the time when he left. In his absence the football team has gone a combined 17-4 dating back to last season, the men’s soccer team is currently ranked No. 22 in the National Soccer Coaches Association of America poll and the men’s basketball team is picked to finish atop the Mountain West this season.

But an AD’s job goes beyond the final results and expands the entire umbrella of sports, beginning in the classroom. Wicker said he has two immediate goals at SDSU: ensuring student-athlete success in the classroom and improving athletic facilities.

The former goal is just as vital to his success as AD, Wicker said.

“We need to ensure student athletes are provided the appropriate skills during their time on campus to succeed in life after they leave the Mesa,” he said.

Wicker said he will implement a program called the Aztec Going Pro Program, a life skills program that aims to ready SDSU student athletes for life after they graduate.

The program, Wicker said, is a 4-year, 3-credit course meant to help students’ transition from high school to college and eventually into post-graduation life.

The second goal is already in motion, with the addition of the Jeff Jacobs JAM Center and the university’s ongoing mission to build a new football stadium.

“That’s going to be one of the most important things on my plate to start with,” Wicker said of obtaining a football stadium. “We’ll see what the landscape presents itself, and we’ll continue to look to do what is best for SDSU and the athletic department.”

Wicker’s experience on the business side and his proven track record atop the Mesa will aid in his search to build a new football venue. SDSU men’s basketball head coach Steve Fisher called Wicker the “architect” of the $15 million basketball practice facility that opened in August 2015.

In his first stint at SDSU, he was responsible for the day-to-day operations of the Aztecs athletic department and oversaw business operations. Prior to his time at SDSU, he was the associate AD for Event and Facility Operations at Washington State for 10 years.

“An AD has to be a collaborator,” Wicker said. “You have to reach out to your coaches and staff to understand what they need to be successful. You have to work with campus, because I want our athletic department to be involved with campus and with our student athletes. And, finally, I have to reach out to the SDSU community, fans, alumni and the business community, and get San Diego State out there.”

Wicker received compliments from several SDSU coaches, including Fisher, who was a member of the AD search committee.

“This is a much, much better job that it was five years ago when [Wicker] came to town,” Fisher said. “And he’s a big reason why. He knows the coaches, he knows the history, and he knows the challenges. We can all close our eyes and dream of great things as we aspire to climb that mountain higher.”

At the press conference, Wicker and Hirshman were faced with questions regarding the outcome of the lawsuit SDSU lost against former women’s basketball head coach Beth Burns. While he did not directly fire Burns, Wicker did testify last month in the trial as he was the deputy AD at the time of her termination.

Both declined to comment on the decision of the case.

Anthony Reclusado contributed to this article.