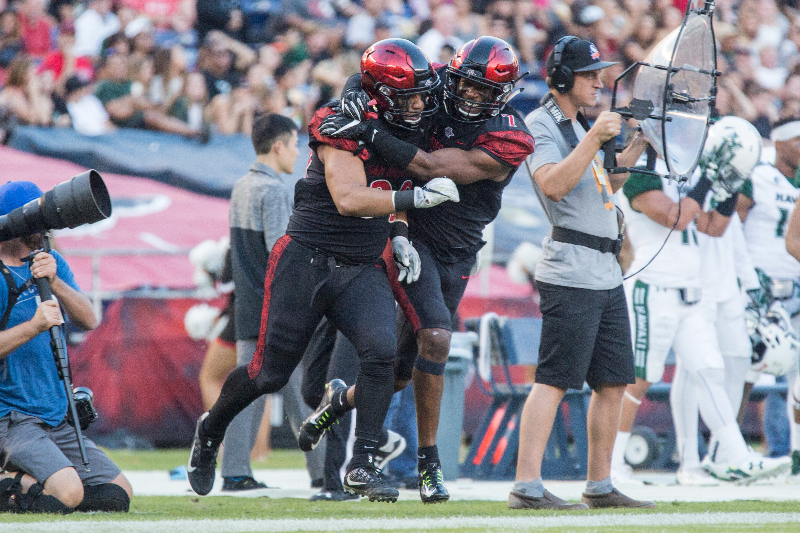 Fittingly, in San Diego State football’s 55-0 victory over University of Hawaii, its most dominant win of the 2016 season, no one player stole the spotlight.

Seven different Aztecs scored a point in the dominant victory, six of whom reached the end zone, as they improved to 8-1, the program’s best start to a season since 1977, when the team finished 10-1 and as the No. 16 team in the nation in the AP poll.

Four of the scores came on offense, and two on defense – and none came from senior running back Donnel Pumphrey, who gained 112 yards on 21 rushes for his eighth consecutive 100-yard game.

Redshirt freshman Ron Smith, who made his first career start, said the mindset of his team has shown on the field, especially on this night.

“We come in to every week with the same mindset,” Smith said, “which is to make big plays on offense and keep their offense out of the end zone. The coaches preach it, and the seniors preach it very well, so we just feed off of that and make plays.”

SDSU lived up to Smith’s measure defensively, holding the Rainbow Warriors out of the end zone, marking the first shutout Hawaii has suffered in 2016.

Head coach Rocky Long said that the shutout performance was impressive, even in the run of blowout games the Aztecs have strung together.

“In this day and age, it’s a big deal to shut somebody out, so that’s pretty cool,” Long said. “Late in the game, 10 of the 11 guys we had out there were freshman, but we [the coaches] didn’t have to do anything, because the veteran players were coaching them from the sidelines.”

SDSU held on late, and dominated from the get-go, gaining 148 yards in the first quarter, and jumping out to a quick 14-0 lead.

On the opening SDSU drive, Pumphrey busted a 20-yard rush on his first touch of the game, and junior wide receiver added a 23-yard rush to set up a 13-yard touchdown from redshirt sophomore quarterback Christian Chapman to junior tight end David Wells.

The score was Wells’ second of the season, and second of his career, all coming in the last three weeks.

Truxton, who had his longest rush of the season on the first drive, continued to contribute on the next SDSU drive.

The Aztecs took the ball from their own 12 yard line, and aided by 52 yards on the ground by Pumphrey, found the end zone once again, on a 9-yard pass from Chapman to Truxton.

Truxton, who had failed to score during his SDSU career going into last week’s 40-13 win over Utah State, now has two receiving touchdowns in as many weeks.

“We ran the exact same play against Utah State,” Chapman said, “which is kinda crazy how it happened. He just got free, and I threw it up and he brought it in. He’s football smart, so he understands that when a play breaks down you have to look for the quarterback.

Truxton also returned a punt 40 yards to set up a 45-yard field goal for junior kicker John Baron II, helping him to 105 all-purpose yards on the night, coming on only four touches.

“That was big time,” Smith said. “I was definitely excited.”

The pick, which he returned for 11 yards, just as many yards as his brother gained in the first half, set up a 30-yard field goal for Baron.

“Ronley has got bragging rights for the rest of his life,” Long said.

His second field goal, coming with four seconds remaining in the first half, gave the Aztecs a 27-0 lead at the break.

Despite the big lead, SDSU would not let up in the second half, as the Aztec backfield finally found the end zone.

Penny scored the first points of the second half on a 73-yard touchdown rush, a play that outgained the Hawaii rushing attack 73-39.

Redshirt freshman running back Juwan Washington caught a 24-yard wheel route – a play that Penny has scored with three times this season – to put the Aztecs up 41-0, with 1:24 still left in the third quarter.

Washington would later score on a 20-yard rush, his fourth touchdown in the last two games.

In between the two Washington scores, senior cornerback Damontae Kazee quietly made SDSU history on a 54-yard interception return for a touchdown.

The interception was Kazee’s second of the night and 16th of his Aztec career, the most in school history.

Kazee had two of the four SDSU interceptions, all of which helped SDSU win despite running 14 fewer plays than Hawaii, and having the ball for only 27:30 of the dominant win.

The win, which puts the Aztecs one University of Nevada, Reno loss away from clinching the Mountain West West division title, is a showing of the attitude that the team has adopted in conference play, Chapman said.

“Our coaches are preaching ‘One game at a time,” Chapman said. “Early in the season, we got big headed a little bit, and it bit us in the butt. But now we’re just taking it one game at a time, and everything is falling into place.”

SDSU will look to continue its 17-game MW winning streak when it plays Nevada on Nov. 12 in Reno, Nevada.