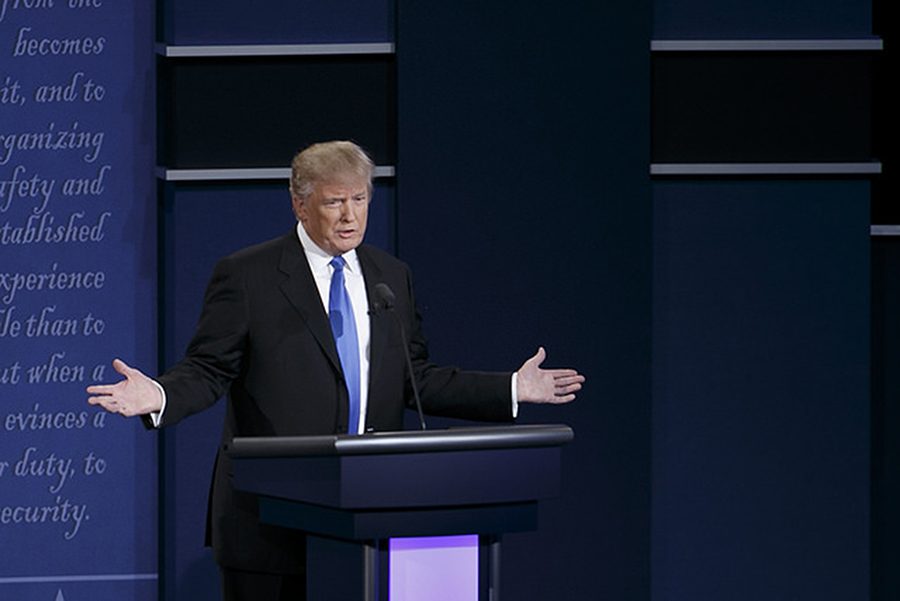 Donald Trump was elected the 45th President of the United States on Nov. 9 after a controversial campaign season.

Trump was declared the winner over Hillary Clinton with 279 electoral votes as reported by the New York Times.

His win over Clinton is a historical moment for the U.S. political system because it is the first time a businessman with no previous political experience has won the presidency.

Over the course of his campaign, Trump publicly said Clinton was “crooked,” a “hypocrite” and “a foreign policy disaster.”

He also made controversial statements about Mexican immigrants.

In a speech announcing his presidential bid, he said “When Mexico sends its people, they’re not sending their best … They’re bringing drugs. They’re bringing crime. They’re rapists. And some, I assume, are good people.”

“I take it very personally just because my mom was an immigrant and I’m first generation American,” Perez said. “She was illegal at a time that she did get detained and everything but she’s not a criminal, my whole family is Mexican. I don’t know anybody who does anything illegal like that, they’re not rapists, they’re not drug trafficking, nothing.”

He threatened to build a wall along the U.S.-Mexico border and kick people residing illegally in the U.S. out.

“We have some bad hombres here, and we’re going to get them out,” Trump said at the third presidential debate.

“It hurts when you hear someone who is that powerful, who has the attention of everybody in the U.S., saying those kinds of things about people that are similar to ones that are close to you,” Perez said.

Sarah Rebymetcalme, theatre, television and film sophomore, said she knows Trump has an ego but “everyone who is a millionaire has an ego.”

In spite of this, Trump remained victorious throughout the election season.

Trump is the chairman and president of The Trump Organization.

In the span of his career as a businessman, he built office towers, hotels, casinos and golf courses worldwide.

Over the past years, Trump has been a member of several political parties. He was a member of the Reform Party from 1999 until 2001, where he made a switch to the Democratic Party until 2008.

Trump endorsed John McCain for president in 2008 and since then has identified himself as a Republican.

This presidential election was the first time Trump ran for any position in politics.

Mark McBroome, accounting senior, said Trump’s successful business acumen is a good quality to have in a president.

“Don’t get me wrong, guy has a good business plan, he knows how to make money, but you know being the president of the greatest country in the world isn’t all about making money,” he said.

At 11:54 p.m., Trump clinched the presidency on what many people called an upset.

Minutes later, he gave his victory speech in New York.

“It is time for us to come together as one united people,” he said. “It’s time. I pledge to every citizen of our land, that I will be president for all Americans and this is so important to me.”

He also said he received a congratulatory call from Clinton.

“I congratulated her on a very, very hard fought campaign,” he said.