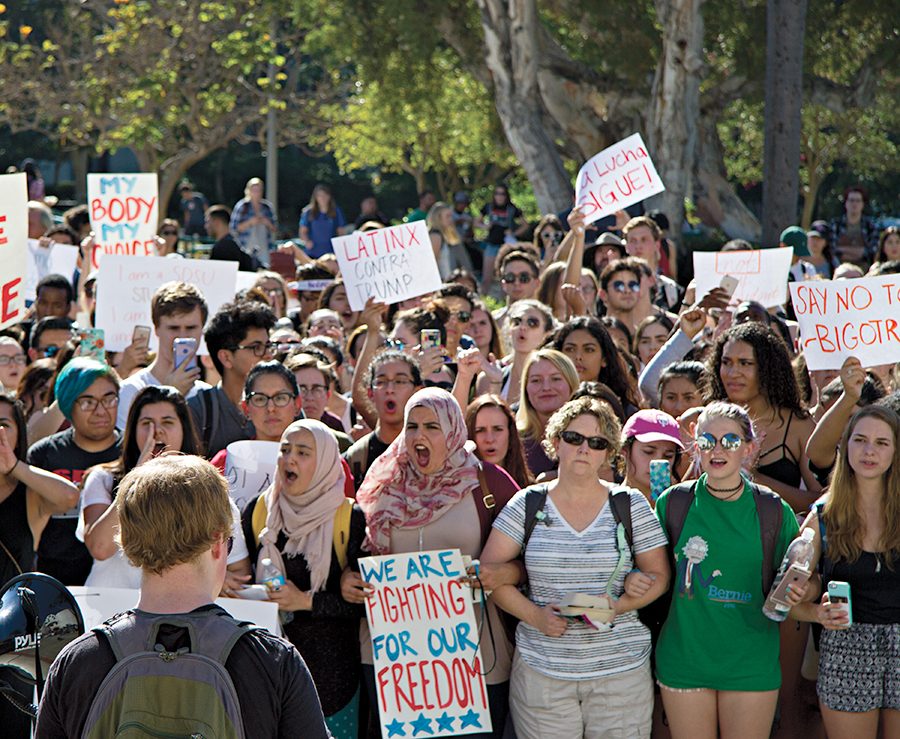 by Kayla Jimenez and Jocelyn Moran

San Diego State students chanted “No hate at state” and “Not my president” at an anti-Trump protest on campus, two days after Donald Trump was elected president.

On Nov. 9, a Muslim woman wearing a hijab was robbed by two men in Parking Structure 12 at SDSU who made comments about President-elect Trump and the muslim community, according to a community safety alert sent by the San Diego State Police Department. Campus police are investigating the instance as a hate crime.

International security and conflict resolution senior Shaila Homan said she was in disbelief when she heard about the attack, and it was the final straw.

“I am here for anyone who feels marginalized who feels afraid of our political climate right now,” Homan said “We’ve already seen so much violence and hatred on campuses across the nation as well as off campus, you know to our citizen or people in our country and that is not okay.”

Other chants included “love trumps hate,” “SDSU, what are you going to do?” and “bridges, not walls” as protesters marched from Hepner Hall, through East Commons and around Love Library.

“Honestly, I mean what you see here is students standing with each other and it shows you that there is always support,” said mechanical engineering senior Mohawned Alsalmi.

The protest was organized by the Womyn’s Outreach Association and MEChA.

“We were having a meeting yesterday kind of debriefing about the election and how we all felt because we needed a space to talk about it,” communications senior Abby Deleon said. “The campus felt really silent yesterday and you could just feel the tension.”

Students and faculty in universities around California such as UC Berkeley, UC Los Angeles, UC San Diego, UC Santa Barbara and San Jose State began protesting Trump’s election on Nov. 9, immediately after the results were in.

Psychology freshman Justyce Plunkett said she knew a protest would eventually happen on campus, but SDSU is one of the slower ones to react to what is going on.

“Somebody got robbed yesterday on campus and it had affiliation with Trump behind it and racial slurs and what not and that’s just wrong, especially if we’re on a college campus and we’re all supposed be united,” she said. “We’re all Aztecs by the end of the day.”

Junior political science and public health major Chase Whittaker said he was not surprised by the amount of students at the protest.

“There are so many people Trump has alienated and personally attacked,” Whittaker said. “If we continue to resist these awful changes, our voice will be heard by Congress and they will have to act.”

Students shout “not my president” outside of SDSU bookstore. #SDSU @TheDailyAztec pic.twitter.com/sAzR8UCyGv

President Elliott Hirshman sent out a campus-wide email with the subject line “campus unity” on Nov. 8 morning with a message about the incident and the counseling services offered on campus.

Deleon said that while she was glad he sent it out to denounce the hate, it is too late for some students.

“So many instances like this have happened and I feel like he has to say that now, but I have mixed feelings about it,” she said.

“Muslims, LGBT people, everyone, they’re not alone,” Sriharan said. “This is the moment when we know we’re not alone. People will fight for us.”

Christopher Garcia, psychology pre-med senior said he appreciated the protest and others happening throughout the country.

“After Trump got elected I was automatically scared because I am gay, so like coming to school it was something that like am I still safe, and is school still like a safe zone for me,” he said.

Students were invited to speak in the middle of the crowd at the end of the protest in front of Hepner Hall.

“We need to come together as a country and understand that everyone is hurt,” theatre, television and film major, Kennedy Garcia, said. “We need to be united. We need to love the hate that others prevail. We all are humans. It does not matter that you are black or asian or white or hispanic or arabic. It does not matter. Gay or straight. We are human. We are a human race.”

Junior international business Zaria Suggs said she remembers seeing the bar and numbers for Trump go up and thinking those were the people that hated so much.

“I’m a minority. I am someone that is tormented in America, and we are not alone,” Suggs said. “We stand together arm in arm. We are not alone. Never think that you are alone.”