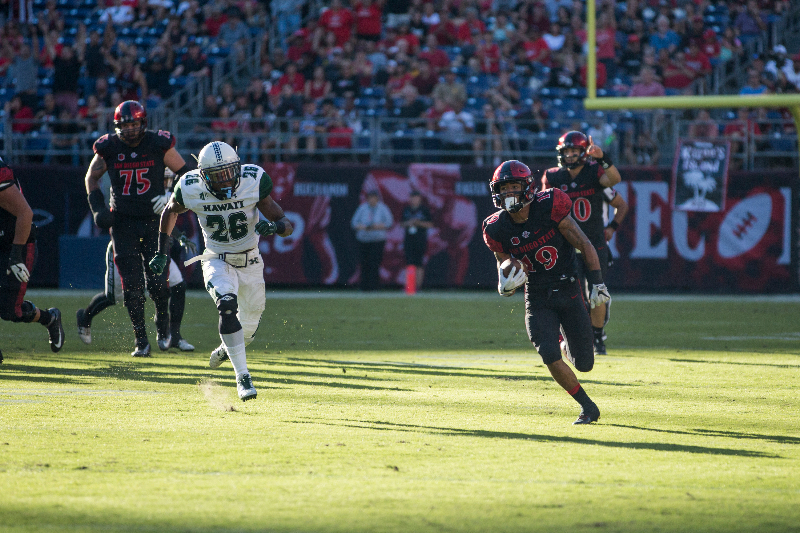 This game was decided, much like in most other SDSU wins, at the line of scrimmage.

Sticking with the status quo, the Aztecs (9-1, 6-0 MW) rushed for 474 yards, a new school record, against the Wolf Pack defense that allowed 279.9 yards per game, the second worst average in the FBS entering the match.

The two combined for three scores, and freshman running back Juwan Washington added one more – his fourth touchdown in the last three games.

Conversely, Nevada managed 90 yards, the fifth consecutive game the SDSU defense has held its opponent under 100 yards on the ground.

The outmatched ground attack was on full display in the Aztecs’ first possession, a six-play, 75-yard drive that consisted of five runs, and punctuated with a 40-yard touchdown run on Penny’s first touch of the night.

But the lead diminished quickly, because for the second time in three games the Aztecs allowed a touchdown on the first defensive possession, as sophomore quarterback Ty Gangi completed six passes on the way to a Nevada score.

Wolf Pack senior tight end Jarred Gipson took a Gangi pass 20 yards, before fumbling at the one yard line. But senior wide receiver Hassan Henderson jumped on the ball to tie the game 7-7.

After a 28-yard field goal from John Baron II, who went 2-2 on the night, the Aztecs’ defense put its stamp on the contest.

On back-to-back possessions, SDSU made two interceptions, the first by redshirt freshman cornerback Ron Smith and the second by sophomore safety Parker Baldwin, both of which led to offensive touchdowns.

Smith’s interception was his second in the last two games, which were his first career starts.

The first score was a 7-yard run from Pumphrey, but redshirt sophomore quarterback Christian Chapman was able to cash in after the second pick. He threw a touchdown to junior wide receiver Mikah Holder, marking his first score since Week 3.

The 19 unanswered points led SDSU to a 26-7 halftime lead and the run continued into the second half.

Chapman found junior tight end David Wells on a 17-yard touchdown, his fourth touchdown catch in as many games, on the Aztecs’ first possession of the third quarter.

Penny provided the highlight of the night on the next drive: a 73-yard dash that put SDSU up 39-7. It is the second straight week Penny busted a run of at least 70 yards.

He also had one turnover, a fumble that Nevada recovered at its own 1-yard line.

The fumble was the first turnover committed by an SDSU player outside of Chapman this season.

After Gangi added one more touchdown toss, redshirt freshman running back Juwan Washington topped off the victory with a 45-yard touchdown run, his fourth score in the last three weeks.

But the Aztecs three forced turnovers and relentless pressure on Gangi proved to be too much for the Wolf Pack, just as it has for each of the six teams they have played during MW play.