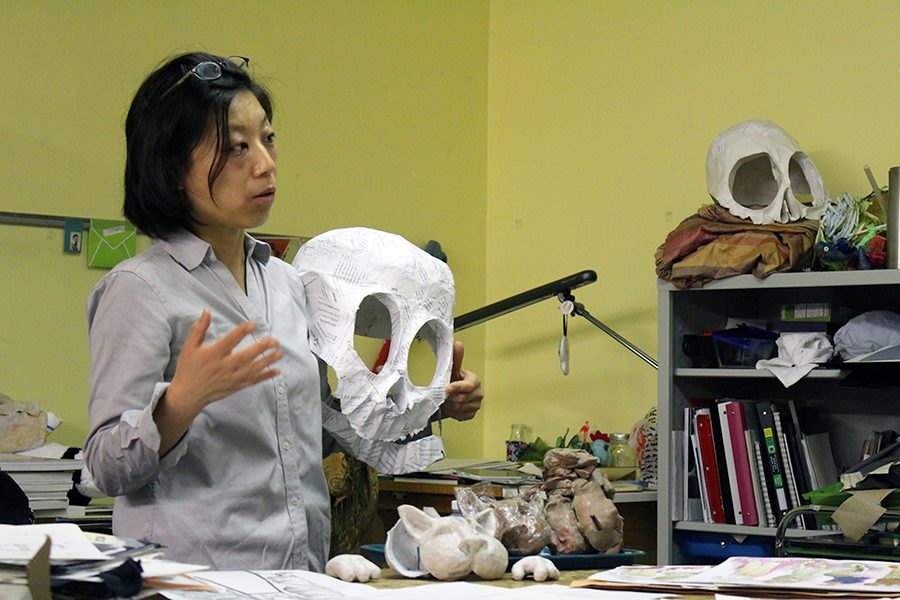 Theatrical design is a process.  The costumes, sets, props, makeup and so much more serve to realize the characters and world of the play.

Every minute detail helps to ease the audience into the “make-believe.” The talented group of artists who make up the theatrical design and technology program facilitates this journey from the real world to the fantasy world.

She is responsible for the spectacular puppetry of last semester’s production of “The Big Friendly Giant.” In addition, she also served as craft artisan and costume designer for “Alice: Curious and Curiouser!” and “Dr. Faustus: Light the Lights” in 2015.

Kobayashi received her Bachelor of Arts from Sonoma State University in 2005 and worked with independent artists in Japan and other countries for 10 years before arriving at San Diego State.

Although she is also skilled in drawing, sculpting and dancing, Kobayashi is pursuing her Masters of Fine Arts in theatrical design.

“I love using my imagination to create abstract designs,” she said.

She created the majority of the titular big friendly giant as well as his foes. She admits that the process was challenging yet rewarding.

“The BFG was a huge thing for me,” she said. “But I really wanted to expand my possibilities as an artist.”

Each production requires a high degree of care and dedication from artisans like Kobayashi.

“I start with the script, then I research, collecting information according to what the designer wants and what the director wants,” she said. “Especially for BFG, I did lots of research for the type of structure we could create for a puppetry system. My sketches were very helpful for me to go through what kind of designs I wanted.”

Kobayashi loves the collaborative nature of theater. For “The BFG,” she designed the giants’ faces to reflect the features of the actors playing them. She said this not only helped her to form the characters, but that it also gave an added layer to the actors’ performances.

Margaret Larhlam, director of “The BFG” and “Alice” has praised not only Kobayashi’s talent but also her work ethic.

“It was wonderful working closely with Nao,” she said. “She’s very committed and has wonderful ideas. She pays attention to the small details, she’s a perfectionist in the best way.”

With the immense success of the show, it’s not surprising that Kobayashi is currently shifting her focus from costume design to puppetry.

However, whether she’s constructing a costume or a giant, Kobayashi’s philosophy is the same.

“It’s always about supporting the story,” she said.

Despite her knack for design, Kobayashi’s background is actually in performance art, specifically in dance.

“I’m really into the art of movement,” she said. “My interest was in dance and body movement and the body’s involvement in performance. I don’t just design what I personally want to see, I design to explore the way that the body moves. The body is always interesting to me.”

Kobayashi believes that her dancer’s sensibility has enhanced her ability to replicate movement in her creations. Since her puppets move in a realistic manner, the audience is able to suspend its sense of disbelief that much easier.

“Nao’s multidisciplinary background endeared me to her,” Larhlam said, “She doesn’t restrict herself to one medium and that makes her an absolute joy to work with.”

Just as she draws inspiration from movement, Kobayashi is endlessly fascinated with what inspires others as well.

“I’m always interested in what local artists in Los Angeles or here in San Diego are doing,” she said. “I like looking to all disciplines. I’m quite curious about how people create art based on their environment and their background. I’m curious about their honest vocabulary as to each discipline.”

It is this openness to new experiences that makes Kobayashi a great artist. This creative freedom is essential to honest and evocative storytelling.

“She is first and foremost a real artist,” Larhlam said. “She’s an artist to the bone.”

Kobayashi does not confine her ambitions to the theater world. It may only be a matter of time before she moves on to master yet another medium.

“Anything I can do using my skills, I’m open to,” she said.