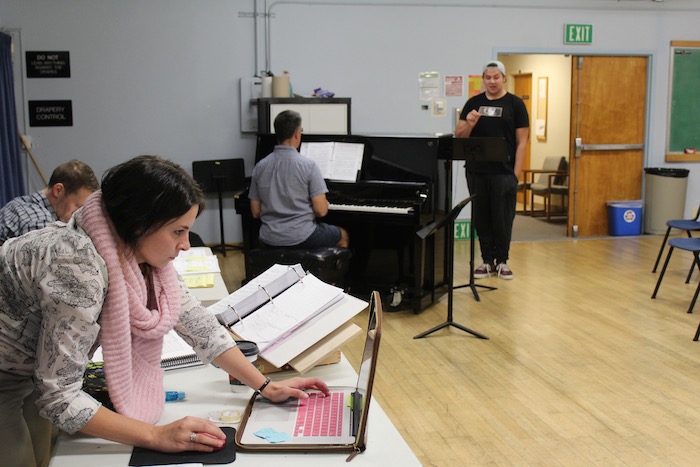 Stage managers are some of the first roles to join the process of a play or musical.They are incorporated into auditions, castings, design meetings and rehearsals and directors’ decisions.

They are the ones calling the light and sound cues, costume quick-changes and scenery movements.

As a theatre, television and film senior with an emphasis in stage management, Aimee Holland knows all about this art form.

As a stage manager, Holland works hands-on with directors, making sure that they are updated with any changes made the previous day and helping to move along the actors during rehearsals and final shows.

Ever since she can remember, Holland said she had a passion for theater.

She first pursued this passion by performing in the theatre at a young age and learning to play instruments and read music in junior high school.

Her father and brothers all pursued careers in engineering, while her mother was a history and English teacher.

While she was the first one to pursue a career in the arts, she said her family was always supportive of her passion.

Holland was originally a performance major when she transferred to San Diego State.

After taking a stage management class, she knew that it was something that she wanted to pursue.

“It kind of just fell into place and I was like ‘this is it, this is what I want to do,’” Holland said. “My mentor, Jay Sheehan, has been great with sort of filtering me into the system here and he’s gotten me some professional work outside of school.”

Holland worked many different venues this past summer. She worked as a stage management intern on “Macbeth” at the Old Globe Theatre. She also worked backstage as a production assistant for the MLB All-Star Game concert series at Petco Park.

Her favorite performances to stage manage are musicals because there are so many different elements that are incorporated.

Holland is currently stage-managing the production of “Jesus Christ Superstar in Concert.” This production is a score, meaning there is no dialogue between scenes. She says being able to read and follow along to music is essential to this job, since it’s essentially all sheet music.

Holland says the collaboration between the other workers is her favorite part of stage management.

“I get to work with the actors and the directors and the designers,” Holland said. “They’re all different sorts of people and they all need to be taken care of in their specific ways. I think that’s the best part of the job.”

Holland said her inspiration in this art form is doing what she loves to do and not letting anything stop her from pursuing that passion.

“In the department, we recently lost a good friend of ours, a recent MFA graduate and something that we’ve all pulled from that is to not stop fighting for what we want,” Holland said. “That has been my inspiration as of recently … not taking life for granted and just doing what I love to do and just believing in and holding true to that.”

Sheehan is the production manager and a stage management professor at SDSU. He is also Holland’s mentor.

Sheehan said likability, organizational skills, relational skills, exceptional timing and the ability to multitask are all attributes that make a great stage manager.

Sheehan said Holland is so successful at stage managing because she naturally possesses all these skills. She is also impeccable with her word and follows through with what she says she will do without fail, he said.

“She gets the job done and I think that’s why she is requested so often is because she goes beyond the show,” Sheehan said. “In the short time she was here, she’s been an exceptional stage manager and the professors are asking for her personally to do shows and that’s a great thing to have when you’re getting ready to go out of school is relationships that you built be in place so that you can use them later in your life.”

Sheehan says Holland’s ability to make and maintain relationships is exceptional because she is well-liked and respected by her peers in the department.

Holland is what the department calls the senior production stage manager.

This means that she stage manages her own show and nurtures the other stage managers in her department.

She also lets Sheehan know how all the productions are coming along throughout the semester.

During every production she oversees, she helps Sheehan teach the other stage managers what needs to be done on stage.

She said she wants to relocate to the East Coast and eventually make her mark on Broadway.

“She just has to be passionate about what she wants to do,” Sheehan said. “In that passion she’ll find her own motivation. I think as any art form, if you’re passionate about it, it will come naturally. She’s exceptional because she is who she is.”