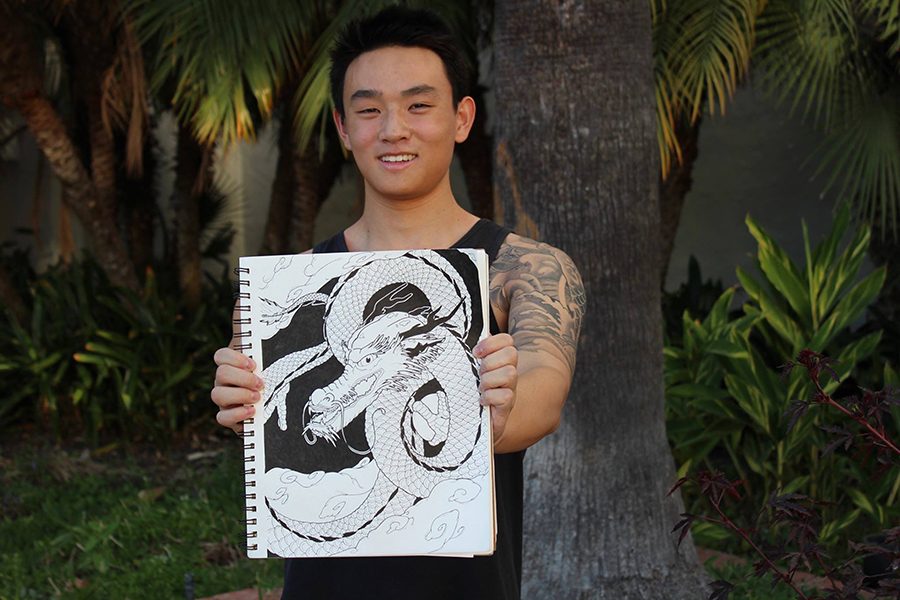 San Diego State graphic design sophomore Douglas Quan has been drawing his whole life but is now ready to share his art and culture with the world.

Although he said he doesn’t have a specific memory of when he become interested in art, drawing has been ingrained in him since childhood.

“Ever since I was little I’ve been drawing and doodling and [my art] has just progressed from there,” Quan said.

Childhood friend and music sophomore Justin Adu-Acquah has gotten a firsthand look at how Quan has grown artistically over the years.

“I’ve known [Quan] since the second grade and he’s always been very creative,” he said. “From then to now his art has really matured and he’s at a point where he’s comfortable sharing and selling his pieces.”

Quan usually uses ink or pencil for his drawings. He also tries to explore different kinds of subjects for his pieces, but he often uses his art to celebrate the world he comes from.

“I’m really inspired by Japanese tattoos,” he said. “A lot of my art is based around the imagery and subjects that Japanese tattoo art has. It’s kind of my culture, I’m half Japanese and half Chinese, so it’s kind of a part of me.”

He said his art acts as a medium for him to educate others on his background.

“For me, [my art] is more about showing other people my culture,” he said.

Adu-Acquah said he’s impressed by the intricateness and attention to detail in all of Quan’s drawings.

“[His art] is really precise and defined as if he creates it using a computer but it’s all by hand,” Adu-Acquah said. “All of the lines and curves and shadings are really impressive.”

Quan said he enjoys enveloping his art in a fantasy world, rather than drawing inspiration from the real world.

“The subject matter (in my art) is different from a lot of art nowadays,” he said. “I see a lot of art that’s really realistic, like photorealism and everyday subjects. So mythical beasts are pretty different from what’s typically portrayed in art.”

However, art classes at SDSU have forced Quan out of his comfort zone with still life subjects.

“I’m not a big fan of still life,” he said. “I like to take [subjects] out of my mind and be creative with it instead of just drawing what I see. But [drawing still life] teaches you how to study an object and get the right proportions and shading.”

Quan said some of his biggest accomplishments as an artist have been possible from the help he’s received from SDSU’s art department.

“There are a lot of elements and principles of art that I didn’t really grasp before [coming to SDSU] that now I’ve got down,” he said. “[I’ve learned] a lot of new techniques and elements to implement in my art.”

One of the techniques he’s learned at SDSU is chiaroscuro, the blending of dark and light colors.

He said this technique has helped him with his shading and making his art more realistic. Quan entered SDSU as a studio art major, but decided to switch to graphic design due to the larger market and wanting to translate his drawings into digital paintings.

His long-term goal as an artist is to commission his art enough to be able to support himself and be his own boss.

“I want to work for myself,” Quan said. “I want to make art and sell it, and have that be my full-time job.”

Last summer Quan began selling his art through Etsy and promoting his work through Facebook and Instagram. He plans to start his own website in the near future.