Trump's election came as a shock to many first-time voters. 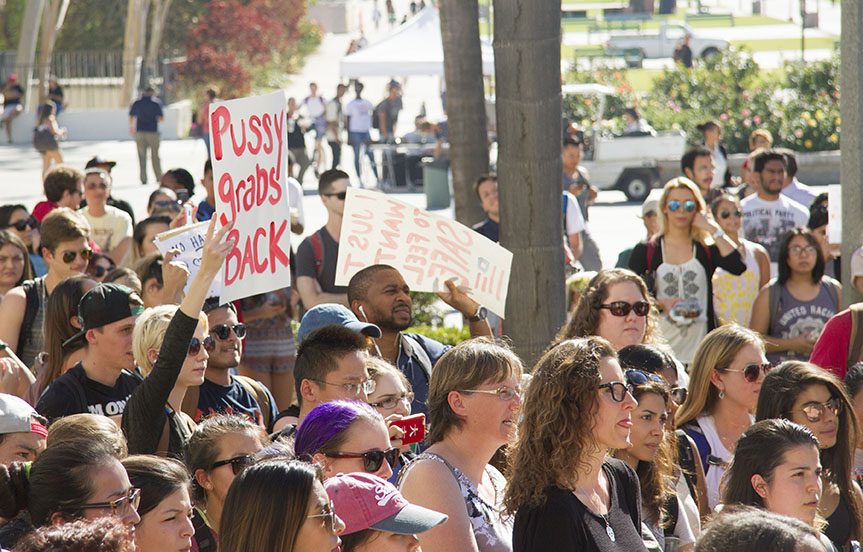 Students demonstrate on campus following the election of Donald Trump.

Julianna McDowell- Donald J. Trump’s politics, especially regarding women, are startling. His campaign was built upon a foundation of misogyny.

The President-elect’s blatant misogyny did not start with the now infamous “grab em by the pussy” line and I doubt it will end on Inauguration Day.

Trump has called women “dogs,” “fat pigs,” and “disgusting animals.” He has ridiculed women from Miss America pageant winner Alicia Machado — urging people to “check out her sex tape” — to politicians such as Hillary Clinton, whom he called a “nasty woman.” He has said women who have abortions should be punished, has been accused of multiple sexual assaults and has an active rape of a minor lawsuit filed against him.

Yet somehow Trump was able to grab women where it mattered — their ballots. Forty-two percent of Trump’s voters were women, which means they were either unaware of his comments and actions or they just did not care. Regardless, Trump’s election will affect generations of women who seek to be heard, especially through politics.

His Republican majority in congress and possible Supreme Court nominees threaten important reproductive rights decisions including Roe v. Wade, which legalized abortion. His party has also repeatedly moved for legislation to defund Planned Parenthood, which receives federal funds to provide various form of healthcare to women, such as mammograms and birth control.

It is our responsibility to resist and to make sure the progress won for women with each wave of feminism is not reversed. Women do not want equal outcomes, but equal opportunities. Nasty women are not afraid of Trump, and we will make sure he — and America — knows it.

Kemi Giwa- The election of Donald Trump will have a profound impact on the future of the U.S. Supreme court. Obama nominated Merrick Garland to fill the court’s available seat, but the election of Trump has all but guaranteed he has no chance of being confirmed. Even worse, any hope for a liberal majority on the court for the first time in half a century is dead.

Trump will now be able to fill late Justice Antonin Scalia’s vacancy and he has said whomever he chooses will be a far right leaning judge.

However fearful many may be in regards to the future of the vacant seat, most observers, including the L.A. Times, noted that the replacement of Scalia with a like-minded justice would not change the court overnight, but rather restore it to where it was before his death last February. The L.A. Times said Justice Anthony Kennedy’s role as swing vote suggests that the court will operate similarly.

However insignificant filling Scalia’s seat might be, the odds that Trump will have other vacancies to fill within his first term is high. Since 1971, the average age of retirement for a Supreme Court justice has been about 79. Ginsburg is 83, Kennedy is 80 and Breyer will be 78 in August.

The possibility of Trump filling additional vacancies means that he has the power to reshape the entire country, a frightening possibility. Even more so considering there is still much to be decided by the court, including sensitive issues such as women’s reproductive rights, affirmative action, LGBT rights, climate change, voting rights, gun rights and possibly even Citizens United.

Though we have no idea who Trump will select to fill potential vacancies with, the new justices will set the direction of the Supreme Court and the values that guide it for the next generation. We can only hope the justices selected do not undo years of progress this country has made.

The Paris Agreement has a high level of global commitment and includes the two single greatest emitters of carbon dioxide: the United States and China. Together, the two countries are responsible for about 50 percent of global CO2 emissions and therefore have a huge impact on the success of the Paris Agreement. The election of Donald Trump is a serious threat to this commitment, as he and Vice President-elect Mike Pence are both climate change deniers.

Trump once tweeted “the concept of global warming was created by and for the Chinese in order to make U.S. manufacturing non-competitive.”

“I’m not a big believer in man-made climate change,” he told The Miami Herald. Nobody knows for sure.”

The problem with this statement from the President-elect is that it is not true.

NASA has made its position clear.

“97 percent or more of actively publishing climate scientists agree: Climate-warming trends over the past century are extremely likely due to human activities,” their website says. “In addition, most of the leading scientific organizations worldwide have issued public statements endorsing this position.”

In his first major speech on energy policy, Donald Trump said that he would cancel the United States’ commitment to the Paris Agreement and dismantle Obama’s Clean Power Plan. He has also tapped avowed climate change denier Myron Ebell to oversee the transition of the Environmental Protection Agency.

This might be the scariest thing the 2016 election has brought to light. The majority of the country, including the next president, has a complete distrust for proven science. That distrust could set the United States and the world back at least four years in the fight against global warming and potentially past the point of no return.

ani Capuchin- This election season has left many of us exhausted and severely disappointed. Although Trump’s victory has mainstreamed a lot of the terrible ideas that were the foundation of his campaign, there are also things to be celebrated.

Kamala Harris, a person of color and California attorney general, was elected to the senate. During her term as attorney general she helped victims of improper foreclosures by mortgage institutions after the housing market crash, refused to take away marriage rights from the LGBT community and implemented the “Back on Track” program that significantly reduced the amount of criminal re-offenses.

Ilhan Omar made history when she became the first Somali-American lawmaker in the United States after being elected as a state repres
ntative in Minneapolis. She is a mother, a Muslim and a refugee from the Somali civil war.
Despite the presidential results, there were definite examples of American citizens saying “no” to the sexism and Islamophobia of Trump.

Talia Raoufpur- Tuesday’s election results left me confused, astounded and speechless. I thought of each candidate’s campaign as I laid in bed pondering how Trump’s win was even possible.

Despite the outcome, Hillary Clinton’s campaign was more successful in marketing her personal and political brand. Human beings are visual creatures, and Clinton utilized this to her advantage. Her online shop featured pins, signs, stickers, tote bags, caps, buttons and even a woman card, all adorned with her signature logos and phrases.

Like the Obama campaign, Clinton’s created an iconic logo that was easily identifiable to her message: “stronger together.” While Obama chose a sun rising on a horizon — the sun signified the O of his last name and the change he strived to create — Clinton chose the letter “H” with an arrow across the middle signifying her plan to move the country forward.

Additionally, Clinton partnered with various A-list celebrities such as Katy Perry, Amy Schumer and John Legend, as well as famous YouTubers who markete
d the hashtag #ImWithHer across social media.

Her opponent’s red Make America Great Again caps were made a mockery. The first Trump/Pence logo, in which the T and P were first thought to resemble male genitalia, was also ceaselessly mocked.

This election has taught me that personal branding only goes so far in creating a positive rapport with a candidate’s own supporters and might not resonate outside each camp’s self-selected information bubbles.