Aztecs set to clash with the Cowboys in Wyoming 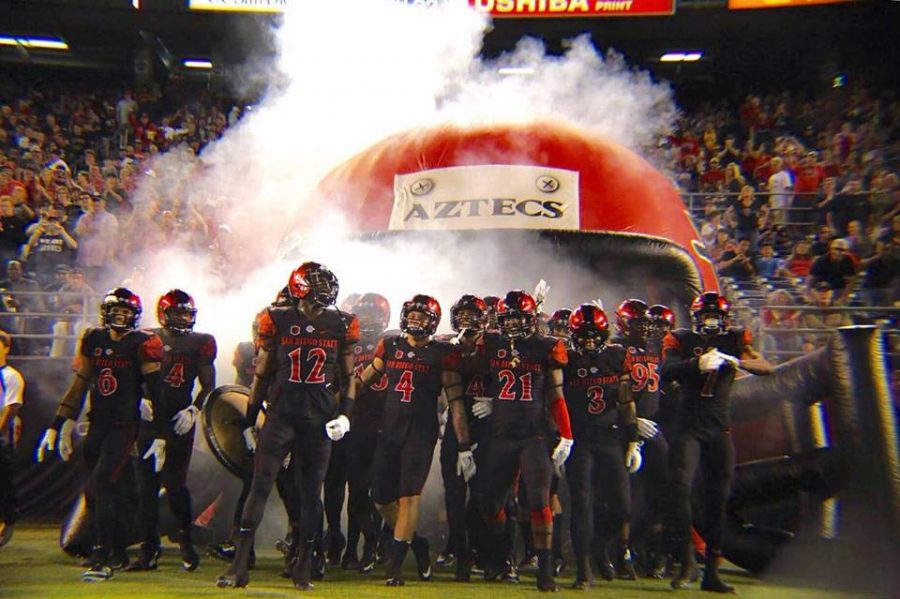 San Diego State football (9-1, 6-0 MW) is set to take on the University of Wyoming (7-3, 5-1 MW) on Saturday, Nov. 19 for the second consecutive road contest in hopes of extending its 17-game winning streak against the Mountain West.

After their 42-24 loss to the University of South Alabama in Week 5, the Aztecs were quickly removed from the Associated Press Top 25 poll. However, SDSU has responded with six consecutive wins, outscoring their opponents 226-42 in that span, and thus, the Scarlet and Black are back at No. 24.

Now on a roll both offensively and defensively, SDSU will face its toughest matchup of the conference season.

The Cowboys are first in the MW in average points scored per game this season (38.9), benefiting significantly from the talent they have both under center and in the backfield.

Wyoming sophomore quarterback Josh Allen has completed 57.4 percent of his passes for 2,218 yards and 21 touchdowns, placing second in the MW in passing yards and touchdowns.

“He’s a really good player,” SDSU head coach Rocky Long said. “He throws it very, very well, he can get out of trouble and throw it down the field. He’s got two really good receivers who, in our opinion, do the best job in our league of going up and getting the ball and taking it away from the defenders, even when they are covered.”

Gentry, who leads the Cowboys with 53 receptions for 962 yards and 11 touchdowns – the most receiving scores in the MW – made two touchdown catches in last Saturday’s 69-66 loss to UNLV that made it onto SportcCenter’s Top 10 plays of the night.

“That wasn’t fun for me to watch because I know we are playing against them (this week),” Long said.

At 6-foot-5, 222 pounds, Allen is a big-armed quarterback capable of throwing the deep ball and has some potential when tucking the ball to run. However, Wyoming elects to limit his running assignments in favor of their star running back, junior Brian Hill.

Hill is second in the MW and third in the nation with 1,417 yards and 16 touchdowns on the ground this season, behind SDSU senior running back Donnel Pumphrey. Both Hill and Pumphrey were announced as two of the 10 Doak Walker Award semifinalists earlier this week.

However, SDSU’s defense has the necessary firepower to disarm the Cowboys.

Following their inside linebacker Calvin Munson’s lead, the Aztecs will try to corral Hill at the line of scrimmage, and force the ball into Allen’s hands, leaving him to test the waters against an improved SDSU secondary.

Senior cornerback Damontae Kazee has dominated because of his strong, consistent play outside the hashes, and opposite of him, redshirt freshman cornerback Ron Smith has thrived in his first two career starts.

Smith beat out junior cornerback Kalan Montgomery for the starting role after a suspension left the position vacant.

He has accumulated 14 combined tackles and two interceptions in his two starts.

Similarly, sophomore safety Parker Baldwin has thrived within his increased role, as he saw his snap count increase after senior safety Na’im McGee suffered a season-ending injury against UNLV.

On the other hand, the Cowboys have struggled significantly on the defensive side of the ball, as they allow 462.6 yards and 33.7 points per game in the MW, opening the door for SDSU’s offense to dull the Cowboys’ spurs.

Meanwhile, the Aztecs rushed for a school record 474 yards against the University of Nevada, Reno and are just 326 yards away from surpassing last year’s team season rushing total.

Heading into Laramie, Wyo., the Aztecs will lean on their dominant defense and historic rushing attack to wear down the Cowboys on both sides of the ball to try and maintain their position in the AP Top 25, and make their way into the College Football Playoff Rankings.