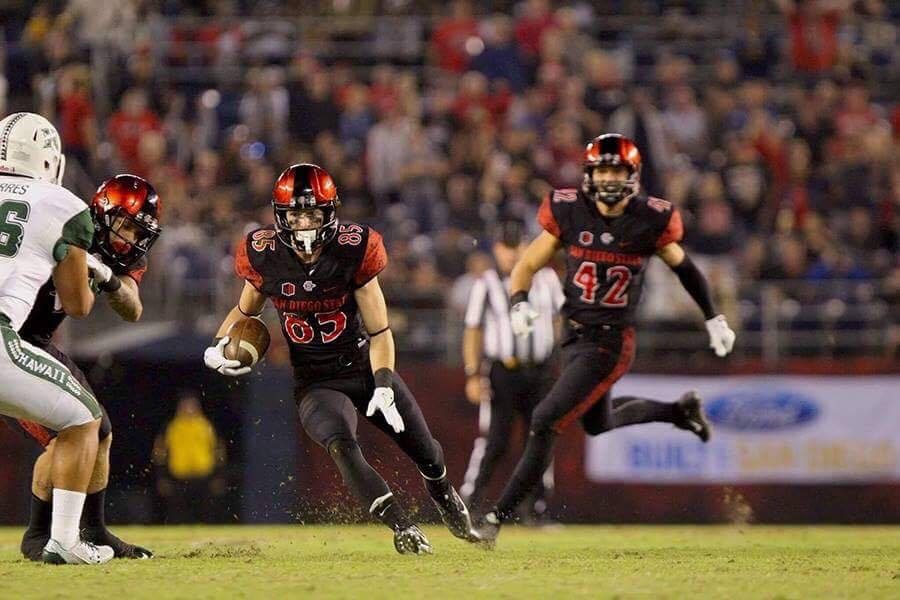 All great things must come to an end.

And on Saturday in Laramie, Wyo., No. 24 San Diego State football’s 17-game Mountain West conference winning streak and New Year’s Six bowl hopes both suffocated in the thin mountain air in a 34-33 loss to the MW’s new giant killer, the University of Wyoming.

After a miscue by junior running back Rashaad Penny pinned the Aztecs at their own 1-yard line, Chapman led the offense 99 yards in just over one minute, capping off the effort with a 23-yard touchdown to a diving junior wide receiver Quest Truxton as time expired.

The mistake dampened what was otherwise another all-purpose masterpiece for Penny, who gained 172 yards on seven touches.

His day started with a jolt, returning the opening kickoff 93 yards to give SDSU the 7-0 lead, his 13th total touchdown of the season and fifth career return touchdown.

Wyoming and SDSU traded field goals as the two offenses stalled for the better part of the first and second quarters, before junior running back Brian Hill punched it in from 11 yards out to tie the game at 14 late in the first half.

Hill, who came into the game as the fourth-leading rusher in the nation, rushed for 131 yards on 31 carries, besting every other MW team’s single game-mark against the Aztec defense.

He led the Cowboys rushing attack that gained 205 yards on 53 attempts, besting the Aztecs, who gained 178 yards on 31 carries.

Chapman conducted a 64-yard drive that ended up in the end zone with a 3-yard touchdown to freshman tight end Parker Houston.

The Aztecs kicked the extra point on that half-ending score, giving SDSU the 17-10 lead at the intermission.

During the half, senior running back Donnel Pumphrey passed Tony Dorsett to move into third place on the FBS all-time rushing list with 6120 yards.

But Pumphrey was all-but absent in the second half, rushing four times for seven yards, and even fumbling the ball once, finishing the loss with a season-low 76 yards.

Hill had no such troubles in the second half, beginning it with a 1-yard touchdown that capped off a 17-play, 75-yard drive that killed nearly half of the third quarter, and tied the game at 17.

The play put the Aztecs back in front, 24-17, and appeared the shift momentum.

But momentum, much like the harsh mountain air in Laramie, can be cold and heartless.

During the first of two consecutive touchdown drives late in the game, Allen connected with senior wide receiver Jake Maulhaurdt on two consecutive plays, one a near interception and one a diving score, to lock the contest once again at 27-27.

Once he got the ball back, Allen galloped with the Cowboys 85 yards on 15 plays, aided by a costly penalty by senior defensive end Noble Hall on third down.

Allen capped off his 282-yard day with the 29-yard touchdown connection with redshirt freshman wide receiver C.J. Johnson, giving Wyoming a 34-27 lead that it would not relinquish.

SDSU is the second AP Top 25 team that has fallen at War Memorial Stadium, the first being Boise State, who lost to the Cowboys 30-28 on Oct. 29.

The Aztecs will get a chance at redemption against Wyoming if the MW Mountain division leader defeats University of New Mexico next week.

SDSU, however, has one more regular season hurdle before that possible rematch in Colorado State University, who will travel to the Mesa to take on the West division champions at 6:00 p.m. on Nov. 28.