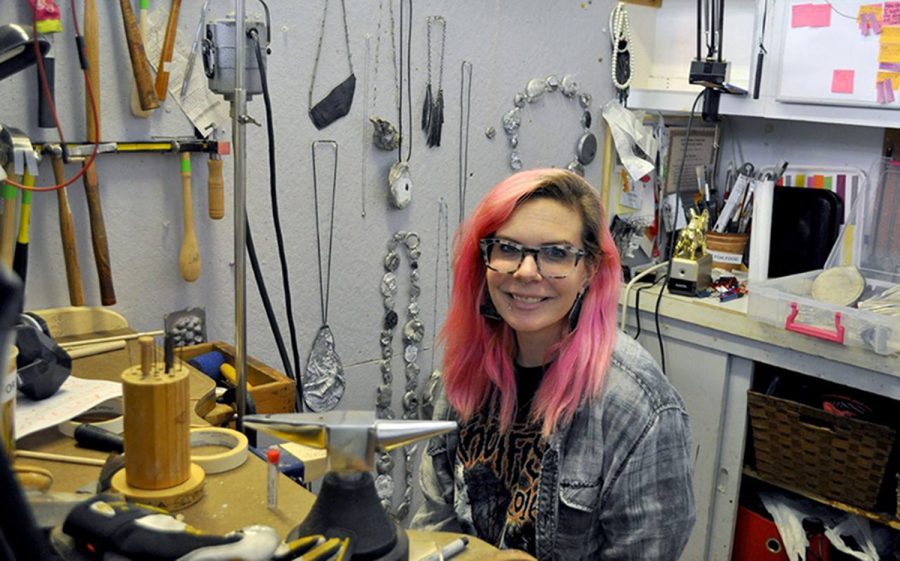 As an undergraduate, she was focused on ceramics and eventually wanted to get involved with art education.

But over time, she said she felt confined by the pressures of having a steady job and income because she was not able to make art herself.

The now third year graduate student is in the master of fine arts program for jewelry and metalwork. She crafts jewelry pieces out of aluminum at her on-campus studio.

Currently working on a 40-page thesis to be presented in April, Selvius is focused on making her pieces into amulets that represent protection from negative emotions.

She said she wants to create a visual understanding of her pieces without contextual explanations.

Selvius said she was inspired to work on this idea while working on her advancement piece in her second year as a master’s student.

While working to prove she was ready to move on to her senior thesis, Selvius said it was all about externalizing internal emotions.

“For the most part, my thesis is what I’m focusing on because I’m trying to do something rather ambitious,” Selvius said.

Aluminum was the perfect physical form for Selvius to work with because she said she is able to freeze it between a liquid and a solid.

Selvius said the aluminum is a symbol, or a physical form, of the negative emotions people feel.

The amulets she creates are meant to shield the wearers from the negative emotions that the warped aluminum symbolizes.

Recently, Selvius made some production pieces for a jewelry sale Nov. 15 and 16 in the foyer of the Everett Gee Jackson Gallery in the Art+Design building.

These production pieces were smaller and more easily wearable than the usual pieces she creates.

Selvius is also involved in the art community on and off campus.

She works for Arts Alive as a lead interactive programming facilitator.

In this role, she coordinates the interactive programs at the farmer’s market on campus and also manages four other graduate student facilitators, and helps them with whatever they need.

During her first year as a graduate student, Selvius went with a group to a professional art conference called Snag and put on a pop-up exhibition called AKA Wear It.

AKA Wear It was meant to create conversation about the jewelry the students made and have people interact with it by putting it on for pictures in a photo booth they provided.

Eventually, the exhibition was brought back to the farmer’s market on campus and to SDSU’s Downtown Gallery.

Selvius has also participated in art shows on campus like the Student Award Exhibition and the Graduate Review Exhibitions.

During her time at SDSU, she has also been the officer of the Jewelry Students Co-op.

“Lissy is a really dedicated and hard worker,” said Leslie Shershow, a first-year graduate student in the master of fine arts program for jewelry and metalwork. “She was extremely helpful during our transition and is always continually helping us whenever we have questions.”

Selvius said she has mixed emotions about the location of the art buildings on campus.

“The art buildings on campus are isolated and confusing like a maze,“ she said. “This confusion seperates students who have no idea about what art majors really do because they’re not exposed to it, from the art students who interact with art daily.”

Eventually, Selvius would like her art to be in professional galleries, but the process to have your work displayed is extensive as students have to submit a statement, media and photographs of their pieces.

After that information is reviewed, the gallery decides which artists they want to feature in their gallery. The process is called open calls. Selvius said the compulsion to create is what motivates her to produce her art.

She said art is her passion and she can’t imagine her life without making and creating things with her hands. If she goes too long without being in the studio, she said she feels pent-up energy.

She said she always wants to make and create more and she always thinks there is more time than there actually is.

“There is meaning to the work, it isn’t just something to fortify your body with or just an ornament on your body,” Selvius said. “It can be so much more than that. It can be wearable art.”