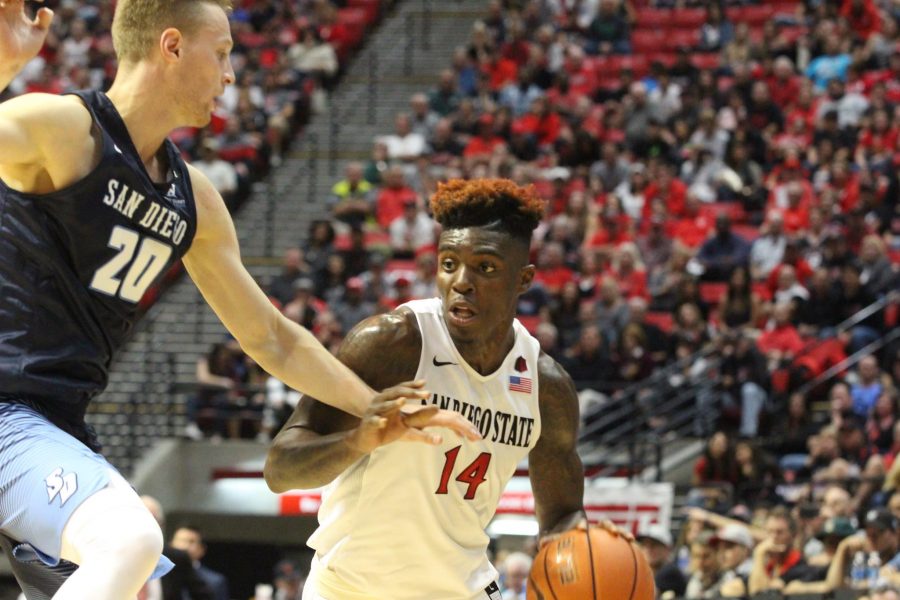 Finally fielding a whole lineup, San Diego State men’s basketball fought its way to a 77-65 win over UC Berkeley for its first win away from Viejas Arena this season.

SDSU trailed only once, coming after a three from freshman Charlie Moore gave the Golden Bears a 7-6 lead, and fought off a furious rally in the second half to win its fourth straight against the Bears, and push its record to 3-1 on the season.

After only playing eight Aztecs last game, head coach Steve Fisher revelled in the return of four key players, as nine Aztecs logged a minute on the floor in the first eight minutes of the contest.

The most notable of those returns was junior forward Malik Pope, who suited up for the first time in his hometown of Sacramento, California, scoring 14 points and grabbing five rebounds in 19 minutes.

Redshirt sophomore forward Max Hoetzel made his SDSU debut as well, scoring 11 points (eight in the second half) and leading all Aztecs with seven rebounds.

Pope immediately made an impact for the Aztecs, scoring the first six points of the game, adding four rebounds and one steal in the first few minutes, highlighting the length and athleticism that this team has been missing in the first three games.

Three early fouls kept Pope off the court for a majority of the first half, but the newfound depth meant SDSU did not miss a beat.

After a three pointer from sophomore guard Sam Singer put the Golden Bears within two points, the the Aztecs went on a 20-4 run, holding the Bears to just 2-15 from the field to end the first half.

At one point, Berkeley missed 12 straight shots that SDSU turned into buckets, unlike in its 69-48 loss to Gonzaga University.

Senior guard Matt Shrigley made two three pointers that ignited the offense to a 10-16 shooting finish to the first half.

Sophomore guard Jeremy Hemsley, who once again led the Aztecs with 15 points, contributed to that strong performance, going on an 8-0 run by his lonesome, pushing the SDSU lead to 34-18 before a Berkeley score finally ended its gruesome scoring drought.

Another three from Shrigley as time expired in the first half gave the Aztecs a 42-25 margin at the intermission, its largest scoring outburst, and lead, in the opening half this season.

But the Golden Bears did not stay in hibernation for long, igniting a run of their own in the second half.

Pope and redshirt sophomore forward Zylan Cheatham scored the first 13 points of the half for SDSU, pushing back after Berkeley cut the lead to 10.

A jumper from Pope – what would be his last points of the night – quieted the run, and kept Berkeley from putting the game in question.

Junior guard Trey Kell, who scored a season-low 11 points on 4-14 shooting, iced the contest, scoring seven points in the final five minutes, including two on an acrobatic jumper off the backboard, to seal the win for SDSU.

The Aztecs did not dominate Berkeley in the statistics column.

After this win, SDSU will be rewarded with a week-long break, before it returns to the Mesa to face Savannah State University on Nov. 28 at 7 p.m.