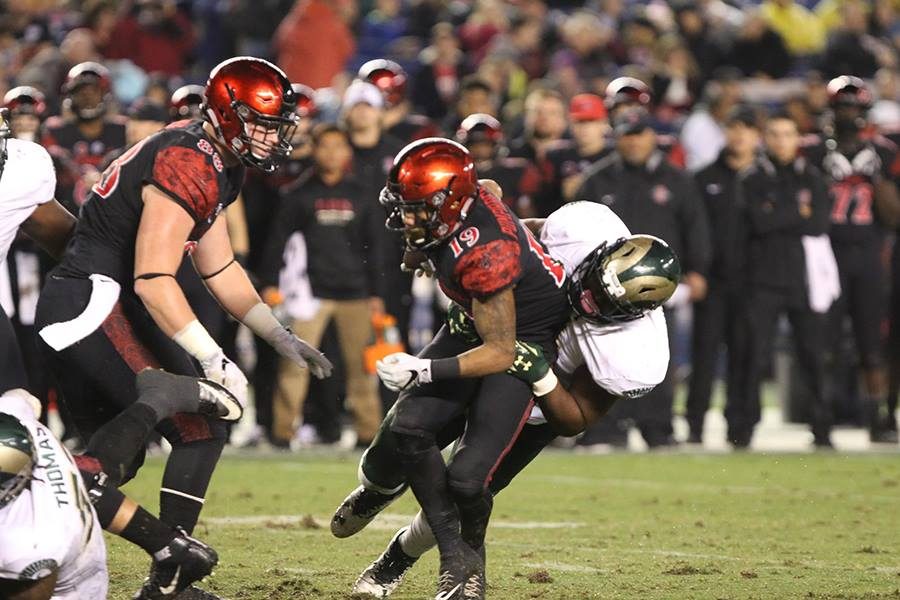 Senior running back Donnel Pumphrey (19) is tackled in the backfield by a Colorado State defender.

The rain came down as San Diego State football honored its senior class before the group’s final home game, quite literally raining on the parade of a class that has brought the program to heights it has not reached since the 1970’s.

The loss dropped the Aztecs to 9-3 on the season, 6-2 in the MW, and ended a 10-game winning streak at Qualcomm Stadium.

Just as the University of Wyoming did in its 34-33 win over SDSU last weekend, CSU controlled the line of scrimmage, gaining 291 yards on the ground against the fifth-best rushing defense in the FBS.

The Aztecs rushed for 191 yards, 81 of those yards coming on a rushing touchdown by redshirt freshman running back Juwan Washington late in the fourth quarter.

Before last weekend, the Aztecs had not been outgained on the ground by any team this season.

The Rams had their way with the SDSU defense from the get go, scoring 42 points in the first half, tying South Alabama for the most points SDSU has allowed this season with 30 minutes left to play.

The onslaught began on the first CSU possession, when junior quarterback Nick Stevens connected with junior wide receiver Michael Gallup for the first of three touchdowns on the night.

Stevens quickly added to the early lead with a 27-yard touchdown pass to junior wide receiver Clark Deitrich, giving the Rams a 14-0 lead with 8:12 left in the first quarter.

The Aztecs allowed 10 total points in the first three MW games at Qualcomm Stadium, a mark the Rams had more than doubled halfway through the first quarter.

Wells’ fourth reception touchdown of the season brought SDSU within a score, but Colorado State’s relentless attack continued, as sophomore running back Izzy Matthews punched it in from three yards out.

But Gallup’s second score of the night and a 91-yard punt return touchdown for redshirt senior wide receiver Robert Ruiz extended the Rams’ lead to 35-17.

Senior running back Donnel Pumphrey, who broke his own SDSU single-season rushing record of 1867 yards, scored on a 7-yard rush, the lone high point in the game for the third-greatest rusher in FBS history.

That score would be the Aztecs’ last until the 4:50 mark of the fourth quarter.

Powered by three straight SDSU turnovers in the third quarter, the Rams scored 28 unanswered points, behind two rushing and two passing touchdowns, giving them a season-high 63 on the night.

Washington’s late touchdown softened the blow, and pushed the Aztecs’ streak of games scoring at least 30 points to six.

But that bright point was not enough to take away from what was a dominating performance by Colorado State.

Stealing a page from SDSU’s playbook, the Rams had the dangerous backfield duo, as Matthews and junior running back Dalyn Dawkins each ran for over 100 yards, the first pair to do that against SDSU this season.

The Aztecs, now losers of two straight, will get one more chance to right the ship and make their case to the College Football Selection Committee next weekend in the MW Championship game.

SDSU will face off against the only other back to run for 100 yards against them in MW play when they face senior running back Brian Hill and the Cowboys on Dec. 3 in Laramie, Wyo.