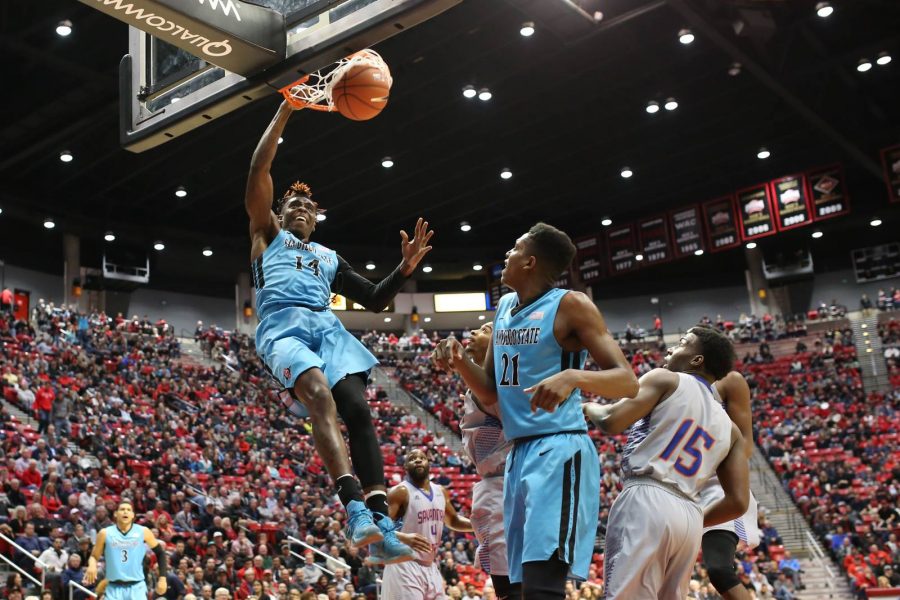 “Our scoring is going to be something that Aztec fans aren’t used to seeing from this team,” Hemsley said. “They are used to grind-it-out, close games, but I think this team is capable of so many more things.”

From the 14:11 mark to the 7:30 mark in the first half, the sharpshooter went 5-for-6 from behind the arc, inviting a louder and louder cheer from the Viejas crowd after each make and helping to open up a 41-24 lead.

His deadly range seemed to open up the rest of the offense, as from the time of his first three (15-12), the Aztecs outscored SSU 45-20 for the remainder of the first half.

In that run, SDSU had success in transition and in half-court sets, often making the extra pass that led to the open shot.

The highlight of the night, however, came when redshirt sophomore forward Zylan Cheatham went streaking down the court for a thunderous transition tomahawk dunk.

Cheatham led the Aztecs with 18 points, a season high, and his second straight game in double figures.

One of five Aztecs in double figures, Cheatham was a perfect 6-for-6 from the field and 6-for-7 from the free throw line. Redshirt sophomore forward Max Hoetzel also added 15 points and eight rebounds.

Cheatham’s precision helped SDSU to a robust 60-32 halftime lead, the third highest-scoring half the team has had at Viejas Arena since it opened in 1997.

The Tigers came out strong to start the second half despite the large deficit, aided by a 2-for-15 SDSU shooting streak when none of the five starters were on the floor.

Shrigley, who was 5-for-6 from the field in the first half, was a part of that cold run, as he went 0-for-7 in the second half, including 0-for-6 from behind the arc.

But the return of the starting lineup, specifically Hemsley and junior guard Trey Kell, ignited a 10-0 run late in the second half that all but put away the Tigers.

What can’t be forgotten in all the offensive firepower is the defensive performance against a high-flying SSU team.

The Tigers averaged 93.6 points per game this season coming into the game, and had not been held under 70 points.

The Aztecs forced the Tigers into bad shots all game long, leading to a 32 percent mark from the floor, and a 10-38 shooting clip from long distance.

The Aztecs once again dominated the turnover battle, forcing 17, which led to 23 points, while only committing 10 of their own, leading to only three points.

The Aztecs return to the hardwood for the Mountain West-Missouri Valley Challenge on Dec. 3 against  Loyola University in Chicago.