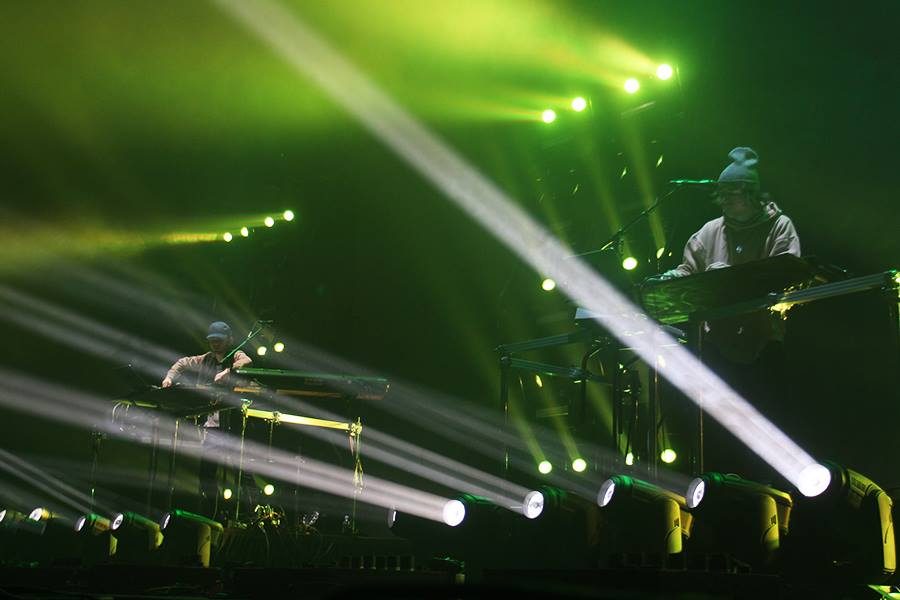 From animated colors to Madeon’s angelic voice, the dynamic duo put on an unforgettable show, making it know to San Diego that they are more than just DJs.

Opening for Robinson and Madeon was San Holo, who displayed his adept ability to transition beats and mash up different genres to create a unique sound.

His mash up of The Pixie’s “Where is My Mind” and Vincent’s “Her,” produced a beautiful melody consisting of pleasant vocals and hard hitting chords. The impressive hour-long set anchored the tone for the main act.

The crowd lit up with anticipation, applauding and cheering loudly just minutes before Robinson and Madeon came on stage.

Appropriate for their joint live tour, they opened up with a VIP version of “Shelter” and the crowd absolutely exploded with euphoria.

Porter Robinson teased the crowd with an extended intro of “Sad Machine” and blessed their ears with his voice, which he had been trying to find before his “World’s” album. The combination of his voice and his lyrics bridged the emotional gap between fans and artist.

This lyric was especially emotional for fans alike as the song depicted a sad robot, which felt the same emotions and social dependency as a human.

At the beat drop, a cluster of streamers and fireworks shot up, illuminating the whole venue for a couple seconds. Along with the light show, the Japanese style animation used for the set’s visuals consisted of beautiful characters and scenery, both stunning and surreal to every detail.

Environmental science junior Alec Daley, who has been following Robinson before the “Worlds” album, blew up his own expectations for the show.

“Going in, I was expecting just another DJ set, but it was so much more than that,” Daley said. “Porter and Madeon put in so much time making sure everything was perfect from the visuals to their acoustic breakdowns.”

While  Robinson’s hit singles captured the crowd’s attention, Madeon had the same effect with his acoustic sound. Layering his live vocals over Kyan’s vocals in “It’s On,” Madeon gave the crowd a reason to sway and jump in unison.

The dynamic duo fed off each other’s energy, projecting their voices on each other’s music and producing their beats with conviction.

Whether it would be heavy drumming for Robinson’s “Flikr” or melodic keys and clear vocals for Madeon’s “Finale,” the duo did it all live.

“It was surreal because at times you would hear an offbeat, signaling the human error that Porter and Madeon made,” Daley said. “But at the same time it made the music so much more real and connected.”

Robinson performed his own rendition of his favorite Madeon song, “Being.” Talk about synergy.

The show ended with an encore performance of “Language,” bringing back the timeless classic for the fans.

“Porter and Madeon took their fans on a musical journey that was full of sound, animation and color,” business junior Karoline Tor said.

The Porter Robinson and Madeon Shelter show was best described as an experience to remember.

The majestic performance consisted of raw sounds, acoustic voices, scenic animations and colors, creating a lasting moment shared between the artists and fans.