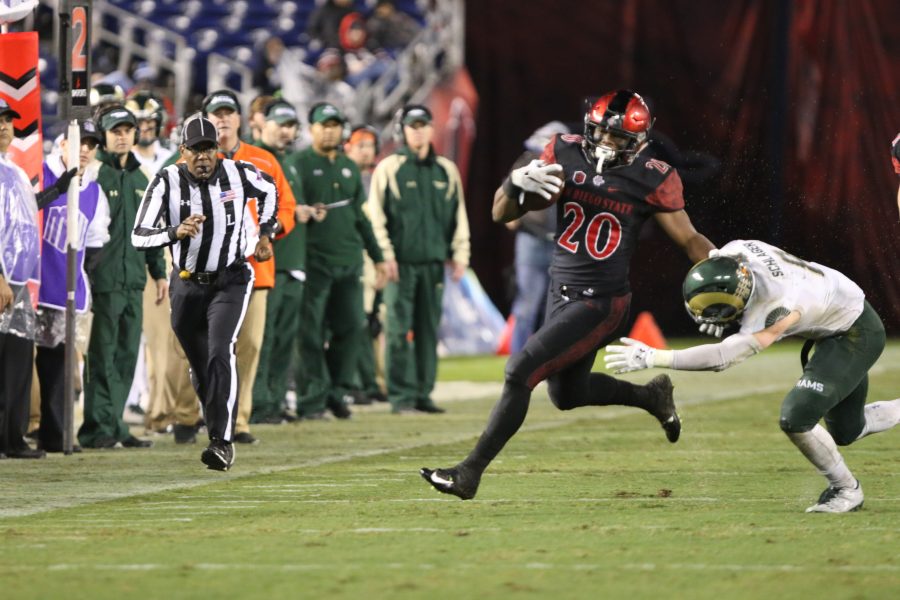 Junior running back Rashaad Penny pushes off a Colorado State defender on his way to a first down run.

Champions are made in Laramie, Wyoming.

Well, Mountain West champions that is.

After falling to the University of Wyoming in devastating fashion two weeks prior, San Diego State football held off another furious fourth quarter comeback to win its second consecutive MW championship, 27-24.

Despite falling behind 10-0, the Aztecs scored 24 unanswered points  to take a lead that they would not relinquish.

The last time these two teams matched up, Wyoming sophomore quarterback Josh Allen torched the Aztecs with two fourth-quarter touchdowns, including the game winner with just over one minute left.

But the gunslinger did not have enough this time around against the No. 12 defense in yards allowed per game.

Allen mustered a 14-point comeback in the fourth quarter, threatening the SDSU defense. But the unit responded, stopping the Cowboys on their last two drives, both coming after SDSU turnovers.

SDSU Head Coach Rocky Long said after clinching his second straight 10-win season that he loved the high-pressure environment of the contest.

“That’s how a championship game should be played,” Long said to GoAztecs.com. “You should have two good teams playing their hearts out, and it should be close right up until the end. The Mountain West Conference got its kind of championship game, like it should.”

The Aztecs put pressure on Allen all game long, forcing him to throw two interceptions and sacking him four times.

That front line domination was not exclusive to the pass rush. The rushing offense, which had been bested in two consecutive games, managed 242 yards on 53 carries behind the dynamic duo of senior running back Donnel Pumphrey and junior back Rashaad Penny.

Pumphrey, who was named the MW Offensive Player of the Year, gained 110 yards on 25 carries and passed Ricky Williams for second on the FBS all-time rushing list along the way.

He stands only 108 yards behind the University of Wisconsin’s Ron Dayne to become the NCAA’s all-time leading rusher.

As he has all season, Pumphrey credited his teammates — specifically the men blocking for him — with setting him and Penny up for great performances.

But despite the eventual pounding, the game began the same way the last game between these two teams ended: with two quick Cowboys’ scores.

Wyoming jumped out to a 10-0 lead, aided by three SDSU penalties and an interception by sophomore linebacker Sidney Malauulu deep in SDSU territory.

Allen turned the interception into points with a toss to senior tight end Jacob Hollister — his third touchdown pass in the last two quarters against the Aztec defensive front.

The Aztecs responded to the quick strike with a one of their own, parlaying a 29-yard Penny rush into a touchdown for Pumphrey, his 16th of the season, to make it a one-score game.

The next play, senior cornerback Damontae Kazee intercepted a pass on the sideline and returned it to the goal line, but Allen forced Kazee to fumble out of the end zone, creating the second change of possession in a matter of seconds.

Kazee said he apologized to Long after the play.

“He just said ‘just go out and get another one!’” Kazee told GoAztecs.com.

Kazee would do just that, grabbing another interception in the pivotal third quarter, earning Defensive MVP honors.

But SDSU would have to settle for a forced three-and-out after Allen’s heroics saved a Kazee score, helped by two Wyoming false starts on third down.

That play, however, was the start of a strong showing by the Aztec defense the rest of the way.

Chapman attacked the Cowboys’ secondary on the ensuing drive, finding junior wide receiver Mikah Holder for 30 yards, the longest pass of the game.

That strike helped set up a 37-yard field goal for junior kicker John Baron II, tying the contest, 10-10, where it would stay for the rest of the first half.

The second half began with SDSU returning to its roots — the ground-and-pound offense.

The Aztecs ran the ball 15 times in the third quarter, accounting for all 15 plays, and it paid off. The No. 7 rushing offense in the nation gained 107 yards in the quarter, reaching the end zone twice, both on 6-yard rushes by Penny.

But the open of the fourth quarter saw a revitalized Cowboys offense, with the same strong-armed Allen at the helm.

Allen hit junior wide receiver Tanner Gentry for a 33-yard touchdown on a broken play, fitting the pass in between two Aztecs to score the first Wyoming points in 37 minutes.

After an Allen fumble led to a second Baron field goal, the sophomore went 75 yards on two throws to put the Cowboys within one score at 27-24.

But Wyoming, which had two chances to either send the game into overtime or steal another win, could not withstand the SDSU defense.

Fittingly, senior defensive end Kyle Kelly closed the championship performance with another sack of Allen on fourth-and-20, sending the Aztecs home as the MW champions for the second consecutive season.

Penny, who eclipsed 1,000 rushing yards on the season in the victory, said his team’s greatest asset is its ability to stand ground when times are toughest —  just as it did Sat. night.

“That’s what we came into the season with since January, it was all about grinds,” Penny said to GoAztecs.com. “And I think we did a great job executing. And if there’s one thing about this team it’s that we never let down, we just keep fighting until the end. And we are gonna continue the tradition here.”

The now two-time defending MW champion Aztecs will get a chance to create a new tradition by winning 11 games in back-to-back seasons for the first time in program history in the Las Vegas Bowl.