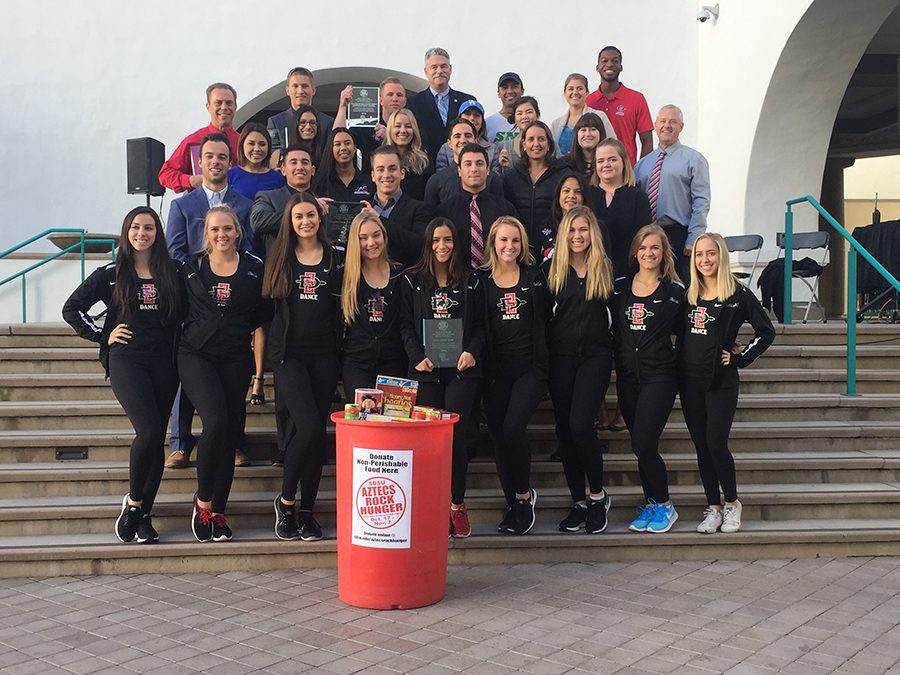 This is an improvement over last year’s record total of approximately 413,000 pounds of food, said San Diego Food Bank CEO James Floros on the morning of Dec. 1 at the event in the Conrad Prebys Aztec Student Union.

“You’re always setting records, that’s what you guys are all about,” Floros said. “I don’t know how you guys do it, but every year, you break last year’s record. When this first started nine years ago, it was impressive, but nowhere near what it is now.”

The food drive, which benefits the approximately 370,000 people served monthly by the San Diego Food Bank, accepted both monetary donations and physical donations of nonperishable food in red bins throughout campus.

The Aztecs Rock Hunger website reported that every dollar contributed allowed for the purchase of six pounds of food. The 448,240-pound total is a combination of both forms of donation.

“We put in so much time and effort and hard work,” A.S Vice President of Financial Affairs Alex Shapiro said. “I’m just so happy to see that not only did the hard work pay off, but we’re really helping people in need.”

He said the result of this food drive is going to help a lot of people.

“It’s going to make a difference, and it shows that this campus really can unify and come together for a greater cause,” Shapiro said.

He said 20 percent of the monetary donations from Aztecs Rock Hunger this year will go to ECRT or the crisis response team in order to give a meal card for students in need of food.

Floros also announced the San Diego Food Bank will be launching a new college hunger program with the goal of placing a food pantry similar to the A.S. Mobile Food Pantry on every university and community college campus throughout San Diego County, calling SDSU an inspiration for the new program.

Representatives from local universities and community colleges will be meeting in January 2017 to discuss planning the food pantry program, Floros said.

A number of these campuses, such as UC San Diego and Southwestern College, already have food pantries.

“What we’re doing is we’re gathering best practices of existing college campuses that have food pantries not only in this region, but outside of the region, and then try to create a formalized program that we can do here countywide,” Floros said.

The San Diego Food Bank will provide local campuses with food, resources and expertise to operate their food pantries, he said.

“It really takes partners like San Diego State to really make our programs a possibility,” Floros said during the event.

“And in fact, you’ve recognized it here for a long time. You’ve been a leader in fighting hunger in our community. But now you guys are a leader in college hunger. And you’ve been an inspiration to the San Diego Food Bank.”