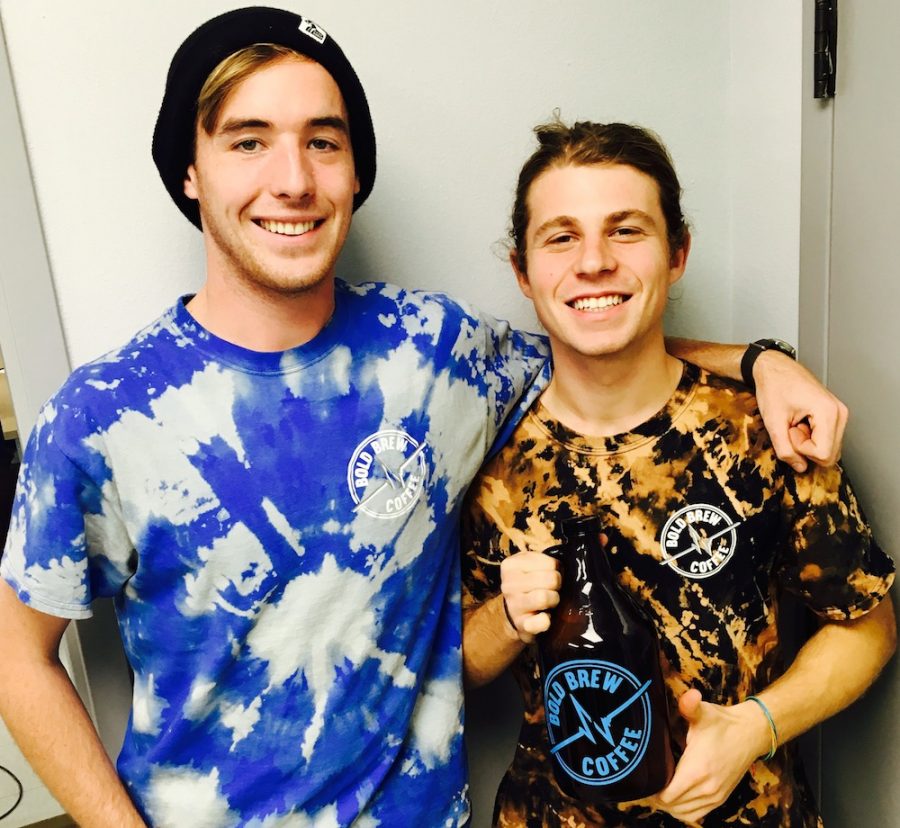 On a campus where there is a Starbucks or Big City Bagels at nearly every corner, Bold Brew Coffee promises to ensure a caffeine fix that supports the active San Diego lifestyle.

In less than a year, mechanical engineering seniors Jack Doheny and Jake Solomon founded Bold Brew, accumulated a loyal following and obtained permission to sell on campus next semester.

Fittingly, Doheny met Solomon while working at a BCB cart on campus.

Bonding over an affinity for coffee and tie-dye shirts, they developed a friendship that would soon become an entrepreneurial partnership.

“He was pitching me a new coffee idea almost every other week,” Doheny said. “But I wasn’t completely on board until one day Jake just said, ‘Dude this is the idea: cold brew coffee and action sports’ and I was like, ‘That’s genius, let’s do it.’”

“We live in a mecca of sunshine and chill vibes,” Solomon said. “We’re trying to blend the skate-surf scene of San Diego with coffee.”

The process that followed was intense yet rewarding. First-and-foremost, the guys had to learn how to brew their own coffee.

“We spent our time just brewing in mason jars and testing out different beans of different origins from South America to Africa to Asia,” Solomon said. “We were finding out what we wanted to bring to the table and what our flavor profile was going to be.”

Eventually the pair found a roaster here in San Diego that produced the perfect bold blend.

However, there’s a great deal of work beyond the bean as well.

“It’s a lot of making connections in the business world to make our product go from our little home brew set-up to creating something that we can actually sell,” Doheny said.

Along with obtaining the proper licensing, Doheny and Solomon also had to be sure to find the right brewing system, cannery, graphic designers and more.

With the backing of the Zahn Innovation Center, a campus incubator for start-ups, Doheny and Solomon were able to persuade the SDSU Dining Department to offer them a contract to sell on campus.

Unlike iced coffee, which is brewed hot then served over ice, cold brew coffee is made by steeping grounds in cold water for 24 hours, exposing the water to the beans for a long enough time for the water to retain a potent amount of flavor and caffeine.

This means that, for those who usually have to load an iced coffee with copious amounts of milk and sugar, the flavor of cold brew coffee is rich enough to be drunk straight.

It is Doheny and Solomon’s hope for the action sports community to not have to sacrifice health for caffeine.

“I’ve been skateboarding since I was 10 so for practically my whole life I’ve been exposed to energy drink and soda advertisements leading me to believe that they were the best brands just because my favorite athletes were using them,” Solomon said. “I feel like people in the industry should promote healthier options.”

While they admit that balancing a booming business with a college course load is definitely difficult, Doheny and Solomon said they draw their motivation from the community.

“All of the work that we have left to do can feel daunting, but we have such a great support system to where it’s not really a problem,” Solomon said.

One of Bold Brew’s greatest assets is that every aspect of the company, from the signature tie-dye shirts to the brew itself, is a byproduct of the guys’ genuine interests.

“We’re just doing something we like. We love coffee and we love action sports. By just putting that out there the response has been so overwhelmingly positive,” Doheny said.

“The fact that our idea is such a representation of us and our community has made the whole process so rewarding.”