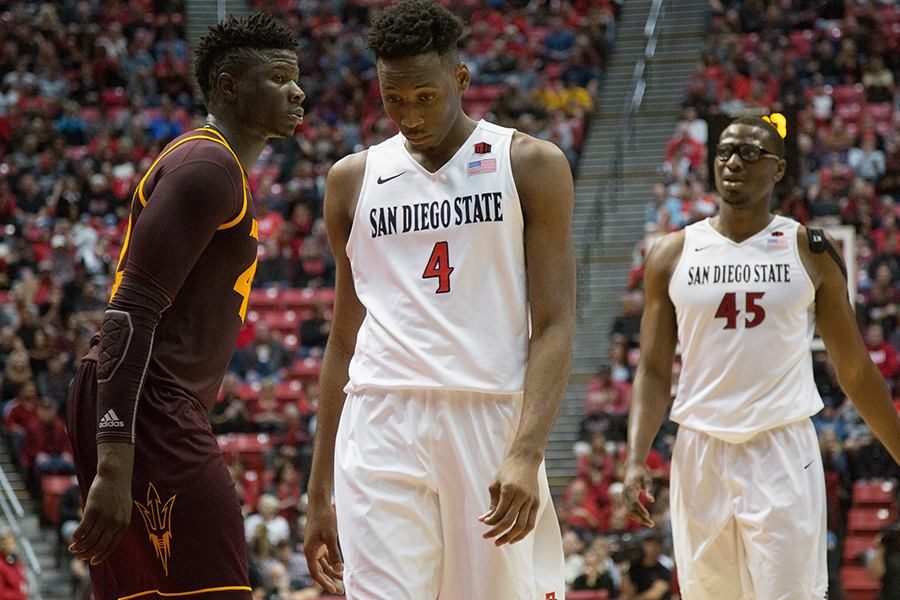 Senior guard Dakarai Allen (4) walks away despondently after a play during the Aztecs' 74-63 loss to Arizona State.

This young 2016-17 San Diego State men’s basketball season has read like the 1966 cult classic film, The Good, The Bad and The Ugly.

We have seen the good – the Aztecs securing a hard-fought victory over UC Berkeley and following it up by scoring 100 points against Savannah State just two weeks ago.

We have seen the bad – losing two straight road games at mid-major conference teams, giving a glimpse into the nonconference struggles that kept SDSU out of the NCAA Tournament last March.

And now, we have seen the ugly, in the form of a 74-63 loss at Viejas Arena to Arizona State University that gives the Aztecs, who have now dropped to 4-4 on the season, their first three-game losing streak since February 2012.

What was not uncharted territory was SDSU struggling once again on offense, especially in the second half, during which it shot 9-31 from the field.

Conversely, after falling behind early, the Sun Devils (6-4) rode a 31-9 run — starting with their last basket of the first half and extending to the 8:24 mark of the second — to a 53-41 lead, one they would not relinquish.

The first 20 minutes were a good sign for the Aztecs, who struggled to find rhythm the previous two games against Loyola University Chicago and Grand Canyon University.

SDSU, which led or was tied for the lead for the first 23:05 of the contest, started the game with a fury, riding the raucous home crowd and suffocating defense to a 14-4 lead.

The Aztecs did all of their damage early on in the paint, where they scored their first 10 and 16 of their first 20 points.

But ASU hung with SDSU throughout the first half, never allowing the deficit to balloon to more than 10.

The last double-digit lead for the Aztecs came after redshirt sophomore guard Max Hoetzel drained a three-point shot, their first made three of the night, to push the lead to 32-22.

Hoetzel finished the game with 12 points on 4-12 shooting, 4-8 from behind the arc, and was one of three SDSU players in double figures.

But the tides quickly turned in the Sun Devils’ favor.

ASU began the second half with back-to-back-to-back three pointers, tying the game at 34-34 and setting the tone for what would be a dominant second half.

Fisher said that was the beginning of the end for the Aztecs.

“I think that started our undoing,” Fisher said, “and we tried to do things too fast on the offensive end and we didn’t fight with the toughness that we did in the first half to make plays on the defensive end.”

Those were the first of seven made threes in the half for ASU, which jumped out to a double-digit lead in the second half.

While the Sun Devils began to heat up, the Aztecs went ice cold, going over six minutes – from 13:36 to 7:29 – without a field goal, the streak finally ending on a layup by senior guard Dakarai Allen.

Despite the putrid offensive play, SDSU trailed only 60-54 with just under five minutes to play after somehow seemingly clawing its way back into the contest.

But then came more of the ugly.

The Aztecs committed eight fouls and five turnovers during the last five minutes, making only three field goals in that span, two coming from junior guard Trey Kell, who led the team with 20 points on 7-15 shooting.

His backcourt mate, sophomore guard Jeremy Hemsley, was mostly absent from the SDSU offense, scoring 10 points on three shots, adding only one assist. This coming after a 28-point performance against GCU.

The second leading scorer in that loss, redshirt sophomore Zylan Cheatham, also struggled in the loss to ASU. Cheatham committed four fouls in a three-minute span, helping the Sun Devils, who hit each of their last 10 free throws, ice the 74-63 win at the line.

When all was said and done, and the fans in Viejas had begrudgingly cleared out, the Aztecs had shot 36.8 percent from the field and were held under 75 points for the third straight game after scoring 75 or more in their previous three games, all victories.

On the other side, four Sun Devils scored 15 or more points, led by junior guard Tra Holder, who dropped 17 and four assists.

The Aztecs, who have thrived in transition, feeding on opponent’s turnovers, committed 17 turnovers of their own, allowing 16 ASU points off of those miscues.

Fisher was candid after the game about his team’s recent failures, and said that it will take a whole team effort, including himself, to turn it around.

“I’m thinking what can we do right now to feel as if we’re making a positive step with our basketball team,” Fisher said. “What can I do to help as a coach … everyone in that locker room do to help us get off the turf, get off the court, stand tall, rely on one another and find a way to get a victory? But you have to believe that you will do it and you can win when stressful times hit. And they will for everybody. They will in life, they do in games and in segments of games and you can’t give in.

The Aztecs will fight again soon, when they face off with Alabama State University at 7 p.m. on Monday, Dec. 12.

They will get a 10-day break after that contest, returning to action on December 22.

That time may be useful for SDSU to sit back and reflect, Kell said.

“I feel like we’ve got to look at ourselves in the mirror, and not try to put the blame on everybody else,” Kell. “If we start with ourselves, I feel like we’ll get a lot out of that. Being leader of this team, it starts with me … I have to see what I can do to help get this team in the right direction. I feel like if everyone has a restart and takes a look at themselves, it will be beneficial.”