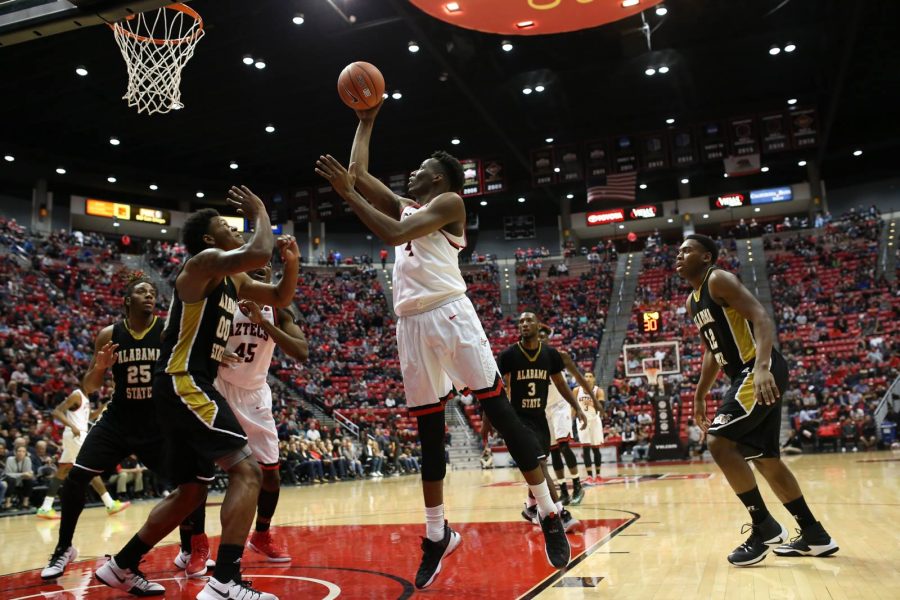 Missing sophomore guard Jeremy Hemsley, the team’s leading scorer at 17.1 points per game, to a minor foot injury, the Aztecs (5-4) still shot 56 percent, including a torrid 15-24 mark in the first half.

If there was ever a game for the Aztecs to regain their footing, it was against the Hornets. Coming into Monday night’s contest, Alabama State was 1-7 this season, the lone win against Cal State Fullerton, 76-67.

Redshirt sophomore forward Zylan Cheatham, who scored 11 points on a perfect 5-5 from the field, his fourth double-digit scoring game of the season, said this win was a needed commodity.

“It’s tough being a part of that, especially since it hasn’t happened in so long. It hurts so bad to be that team, that group,” Cheatham said. “I think it is a token to our character, in my opinion. It seems like when things are going the worst, we find a way to change it and dial in.”

The Aztecs were dialed in from the get-go, starting the game by making 12 of their first 15 shots, with all three misses coming from behind the arc.

Junior guard Malik Pope scored six of the first eight SDSU points after notching only four points in the loss to Arizona State. Pope ended with a team-high 16 and seven rebounds.

Pope has struggled with various injuries this season, and he said that the performance was a step in the right direction, both physically and mentally.

“That’s hard, to be honest, mentally because of my physical health,” Pope said. “I just want to play for my team, so if I need to go out there hurt, healthy, whatever it is, I just do what I can and today I just tried to put two halves together and I actually felt great, so that really helped.”

Even after the offense began to cool off — the worst coming on a run of five missed shots — the Aztecs’ length and speed on defense were too much for the Hornets, who only managed 10 points in the paint in the game.

The Hornets only made two consecutive shots twice during the game – the Aztecs did that seven times.

ASU put together a more serviceable second half performance, at one point cutting the SDSU lead to 19, but was unable to find a solid rhythm or stop SDSU in the paint.

Head coach Steve Fisher said he challenged his team and felt they stepped up to the call.

“I liked just the feel of our players before the game,” Fisher said. “They didn’t mope around and say, ‘Well, we got to play a game that we’re supposed to [win].’ I didn’t have that vibe going in which I liked. And we played hard.

“I thought what we did is what we’re going to have to do to beat good teams.”

The Aztecs won’t play again until Dec. 22 when they open up the Diamond Head Classic against Southern Mississippi University in Hawai’i. They will play up to three games in that tournament before opening up the Mountain West play against University of New Mexico on Jan. 1.