A piece of paper strikes inspiration 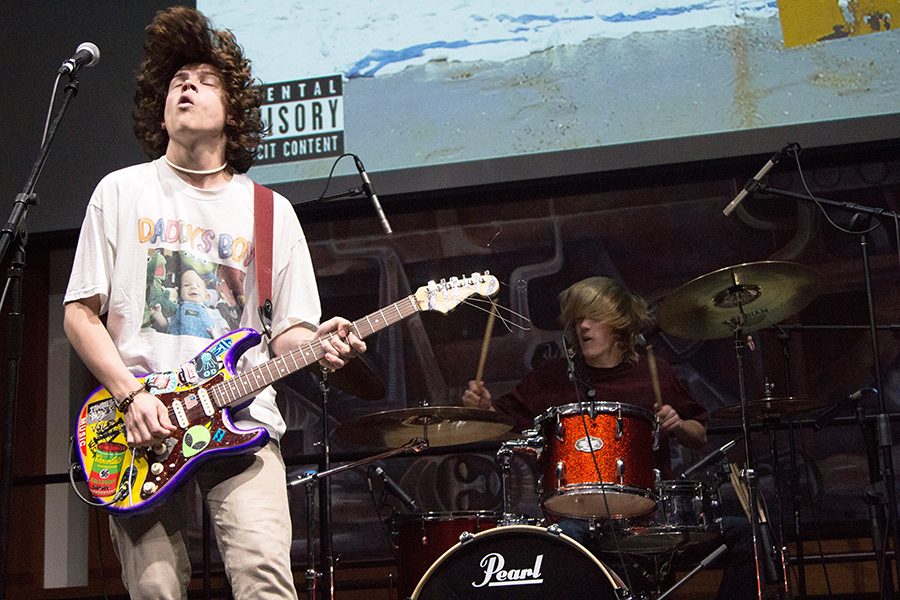 On Thursday, Nov. 17 marketing freshman Hoyt Yeatman’s band, Paper, was asked to leave the stage during the Open Mic Night competition in the Lee and Frank Goldberg Courtyard for being too loud.

Regardless, Paper ended up winning the competition.

“We try to make our shows really entertaining and we do crazy things on stage,” Yeatman said. “We just push it to the max before we get kicked out of the venue.”

Paper was formed in lead singer and guitarist Yeatman’s native Ventura County along with drummer Jeff Demorest and bassist Kyle Hart and has been active for a year and a half.

“I got the band name “Paper” because I was writing (potential) names down on a piece of paper and I was realizing that all of them kind of sucked,” Yeatman said. “I looked down at the piece of paper and thought, ‘might as well.’”

In addition to being lead singer and guitarist, Yeatman also serves as Paper’s primary songwriter.

He said his inspirations range from day to day experiences to the confusions of relationships and adolescence.

“Most of my songs are about girls,” he said. “But they’re also about anything I’m feeling at the time. There’s one song I wrote when I was super sick, I had the flu, and I wrote about that experience. I try to play on emotions everyone feels, or can at least relate to.”

Yeatman said he believes the relatability of Paper’s songs causes the lyrics to stick with listeners, leading to them singing along at live shows.

“People know the songs and will be singing along (at shows),” he said. “I’ve never experienced that. It’s like something you created and can share with people and they enjoy it.”

Yeatman values writing catchy, fun songs just as much as meaningful ones.

“(I hope to write) earworm songs that also make people think about what they’re hearing with the lyrics,” he said.

Paper has acquired a significant online following, with their Instagram account currently standing at 4,673 followers and their most played track, “Seashells,” having 2,274 listens on SoundCloud, their other tracks trailing close behind.

“Everyone (in San Diego) is really into music and bands flourish here,” he said.

Paper has also achieved recognition and established connections with big names in its genre.

It recently won a Battle of the Bands competition in Los Angeles that was judged by Shavo Odadjian, bassist of System of a Down.

On Dec. 17 Paper will open for Smash Mouth at the Canyon Club in Agoura Hills.

“A lot of our fans really get into (our shows),” Yeatman said. “If you like jumping around and fun music you should come to a show.”

“Paper always make the most of its time on stage and always have fun with it,” recording technology and sound design sophomore Domonique Crumpton said. “Their music is very fun, upbeat and in your face. It’s hard not to dance around a bit when you’re in the crowd watching them perform.”

Yeatman understands the fierce competition of the music industry, but still has high hopes for Paper.

“I don’t want to sound like every other band but I want to make it (in music),” he said. “I think we can, I just have to keep making songs and getting them out there. But I definitely want to have a career in this.”

Along with SoundCloud, Paper currently has music up on iTunes and fans can expect its debut full-length album, “Nude Beach,” to be released soon after Christmas.