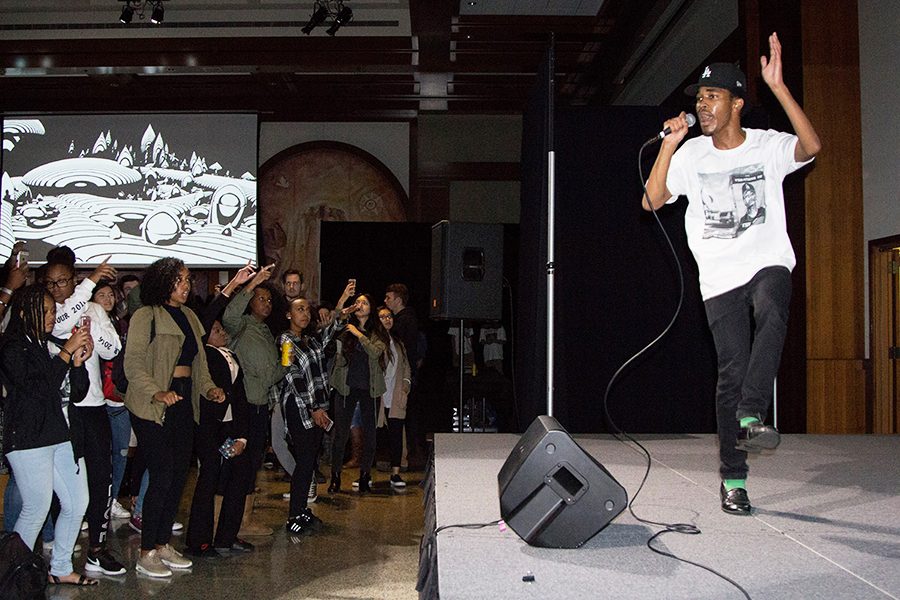 Theater junior and aspiring professional rapper Deion Selma competed in Battle of the Bands on Dec. 1 for the second year in a row in hopes of winning an opportunity to perform in front of thousands of people as the opening act for the GreenFest concert on Mar. 3 2017.

Selma released his first extended play “Vibrations of the West” on Nov. 15 on SoundCloud, Spotify, Amazon Music and Apple Music. He said he has been writing this album for over two years.

He said he has known what he has wanted to do since he was six years old.

Selma said he would perform Michael Jackson songs, adding in his own lyrics, in front of his class almost every week.

“When I was six years old, I just wanted to sing and dance and be like Michael Jackson any way I could,” Selma said.

He said self-expression was what initially motivated him to start writing, and he always knew he wanted to impact people through music.

Selma has performed at numerous events for organizations at SDSU.

During his first week of freshman year, he decided to perform in an open mic night and won. Selma said after seeing people enjoyed his performance, he was inspired to continue rapping.

He said he remembers every performance he has done on campus, and always feels the energy when he is performing.

Selma said recently people have been telling him that they listen to his music when they get ready for school or while they are doing homework.

“Just the fact that people listen to it makes me happy,” he said. “The fact that I’m in their ears, impacting their moods, and allowing them to get away from their problems for a cool minute is tight.”

Selma said performing at Battle of the Bands different than from other performances he has done on campus because he had the power to choose his set, lights, visuals and set the vibe the way he wanted. He said he liked how he was in control and felt like a real artist.

“One thing I truly love about Battle of the Bands is that you get a 15 minute set,” Selma said. “As an artist it’s your first time putting on a concert. You have to think about what you want to audience to see and feel for 15 minutes. It’s your time, they’re entering your zone.”

Ashley Stamets, business management and entrepreneurship sophomore,  attended Battle of the Bands to support Selma for the second time.

“I think battle of the bands is a great opportunity to see the talent that all these student artists have,” Stamets said. “You can tell they are all very passionate.”

Environmental science and engineering senior Mario Newhouse said he believes the Battle of the Bands motivates aspiring music artists to showcase their musicianship and talents.

“Students have this amazing opportunity to perform in front of thousands of screaming music fans at our very own SDSU Open Air Theater,”  Battle of the Bands judge Newhouse said.

The winner of the contest this year was Wet Lettuce and Paper came in second place.

Although Selma did not win Battle of the Bands, he said he put his heart out on the stage and plans to continue to push his music as hard and as far as possible.

“I have one project under my belt and I want to just keep working,” Selma said. “Hopefully 2017 brings even more opportunity. You never know what a year could bring.”