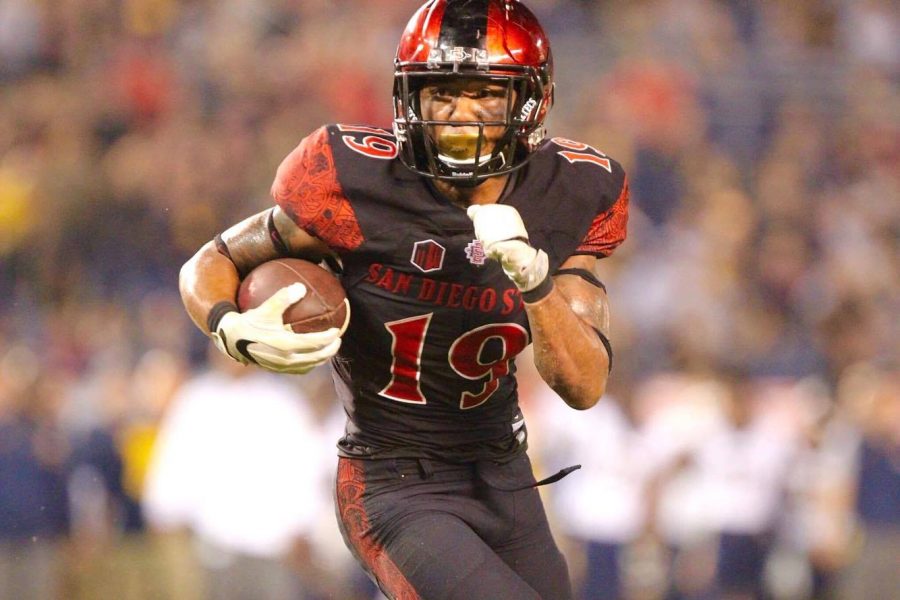 Donnel Pumphrey carries the ball for the Aztecs.

Anchored by its defense and captained by senior running back Donnel Pumphrey, San Diego State football (11-3) scored 34 unanswered points to beat the University of Houston (9-4) in the Las Vegas Bowl, 34-10.

After carrying the ball seven times for a net of negative one yard in the first quarter, Pumphrey found the rhythm that brought him 108 yards shy of cementing his name in history. The 5-foot-9 back took his six second-quarter carries for 59 yards and jumpstarted his historic day.

The record-setting run would come early in the fourth quarter with only 11 yards needed and in patented Pumphrey fashion. He used his speed to get to the edge, turn the corner and finished his run initiating the contact for extra yards.

His 15-yard run secured his place in history in front of his friends and family, passing former Wisconsin running back Ron Dayne for the most career rushing yards in FBS history. The Las Vegas native ended the day with 115 yards on the ground.

While Pumphrey was running into the record books on the third-ranked rushing defense, the Aztec defense tormented Cougars’ senior quarterback Greg Ward Jr. SDSU sacked Houston’s signal caller seven times, picked him off four times, including a pick-six and battered him whenever he ran the ball.

In a case of complimentary football, the Aztec defense, like the offense, didn’t pick up its play until the second quarter. The Cougars were held to five yards of total offense and zero first downs in the second frame.

Despite not finding the end zone on either second quarter drive, the Aztecs drove inside the red zone on both possessions to close out the half but were forced to settle for field goals on both occasions.

The Aztecs carried the momentum into the second half and slowly ran away with the game.

After dropping an easy interception in the second quarter, SDSU junior safety Kameron Kelley earned retribution, intercepting Ward Jr. just 55 seconds into the third quarter. He also picked off Ward Jr. late in the match with the game well in hand for the Aztecs.

Senior inside linebacker Calvin Munson followed Kelley’s lead, as he halted Houston’s ensuing 11-play, 58-yard drive with an interception of his own.

Pumphrey and company weren’t able to convert offensively on Kelley’s interception, but they didn’t make the same mistake twice.

Following Munson’s interception, SDSU’s sophomore quarterback Christian Chapman connected with Mikah Holder for a 12-yard gain to get the Aztecs going on the following drive, but Pumphrey did the rest.

He hauled in a one-handed, 26-yard pass along the sideline from Chapman just one play prior to capping off the Aztecs’ drive with a 32-yard touchdown run to put SDSU up 13-10.

Redshirt freshman Ron Smith intercepted Ward’s screen pass and returned it 54 yards to the end zone, giving the Aztecs a 10-point lead going into the final 15 minutes of the game.

The night didn’t get any better for Ward Jr..

Sophomore defensive lineman Noble Hall tackled Ward Jr. on a key fourth down for the Cougars with just over nine minutes left in the game. Chapman connected with senior receiver Curtis Anderson III for a 28-yard touchdown on the following play, putting the Aztecs up 27-10.

In his 41st consecutive start for the Aztecs, Munson added a sack to his stat line late in the game and finished with a team-high eight tackles.

SDSU leaned on junior running back Rashaad Penny and redshirt freshman running back Juwan Washington to run down the clock for most the fourth quarter to secure the victory. Washington put the nail in the Cougars’ coffin with a 7-yard touchdown with a little more than a minute left in game.

While Pumphrey’s career mark was the talk of this game, the Aztecs captured another historic rushing mark. With Penny’s 23 rushing yards, SDSU became the first team in FBS history with a 2,000-yard rusher (Pumphrey) and a 1,000 yard-rusher in the same season (Penny).