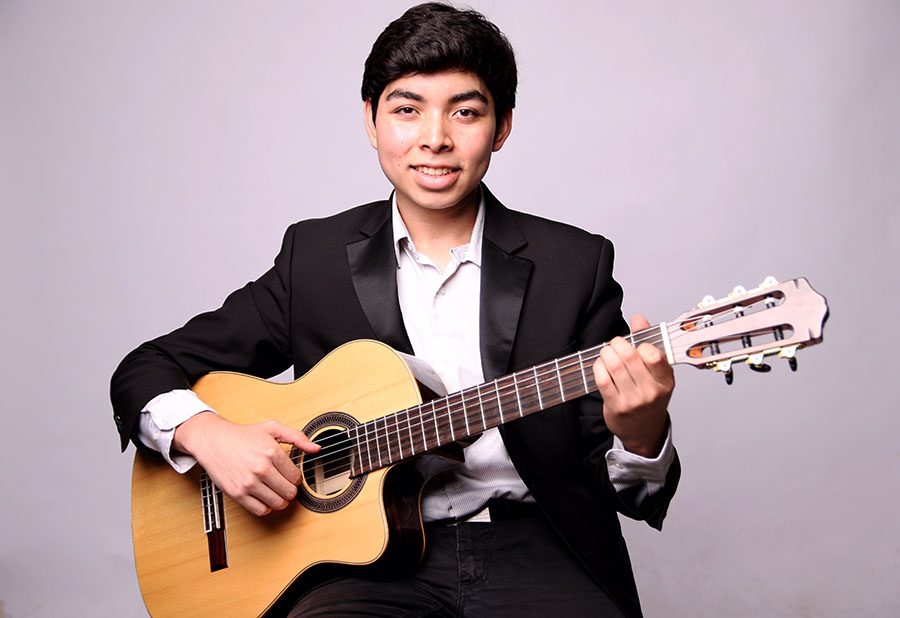 Jesus Cervantes finds beauty through the difficulty of the instruments he plays. Photo courtesy of Christine Maninang

Music performance sophomore Jesus Cervantes takes on two of the toughest instruments to master on a daily basis.

Cervantes has been playing guitar since age 10, and picked up violin a few years later when he joined his middle school orchestra.

“The amount of focus and dedication it takes to really master these instruments is what drives me to continue playing them,” he said.

Cervantes is currently a member of San Diego State’s symphony, as well as the symphony orchestra for the City Ballet of San Diego. He also teaches private violin and guitar lessons to high school students.

However, Cervantes said his most memorable music experience was when he toured China in summer of 2015 with the San Diego Youth Symphony, playing four sold out concerts.

“It was cool to interact with the culture in China and share the music that we have,” he said.

“Writing music is always drawing on your life experiences and your emotions that you’re going through,” he said. “Using techniques that I’ve learned in music theory, there are certain things you can convey to certain chord progressions or styles that you use in composition.”

Music performance freshman and fellow member of the SDSU symphony, Diego Guerra, said Cervantes does not treat music as pure academia, and always values the art in it.

“I appreciate (Cervantes’s) dedication to the music,” Guerra said. “While he slaves in the practice room to learn the notes, he is unique in that he never forgets about the art form.”

He describes most of the music he plays as classical music.

“You don’t really hear classical music on the radio as much, and people don’t listen to it as much as contemporary styles,” Cervantes said. “I like it because it’s a lot more of academic music, and it’s a lot more complex than today’s music.”

He said he hopes to reach wider audiences with his music and make classical music a more accessible genre.

“(Classical music) is not really the most prominent genre right now,” he said. “I definitely try to reach out to audiences who wouldn’t normally listen to classical music because I think that’s a huge part of exposing more people to it.”

Although most people do not actively listen to classical music, Cervantes finds that people respond well to it due to their ingrained familiarity with the genre.

Cervantes said an effective way of appealing classical music to wider audiences is to combine it with contemporary styles.

“On my Instagram account I try to do a combination of classical music and covers of contemporary music to have a variety of things on there and not limit myself to just one genre,” he said.

In addition to his style of playing, Guerra said people are intrigued by Cervantes’s live performances as well.

“(Cervantes’s) performances are always sincere,” Guerra said. “He is able to share the music with the audience and make people lean forward in their seats.”

Some of Cervantes’s biggest goals and dreams are to be a member of a professional symphony orchestra and to score a movie.

He said he could also see himself working as a studio musician for pop or hip hop artists.

“A lot of new albums, like Kendrick Lamar’s “To Pimp a Butterfly” or J. Cole’s new album, they use a lot of strings in them or have jazz influences,” Cervantes said. “So it’s kind of something that’s coming back in popular music.”

Along with his Instagram account, Cervantes said he hopes to start a YouTube channel for his music, and said any future projects he releases will be on that channel as well as SoundCloud.