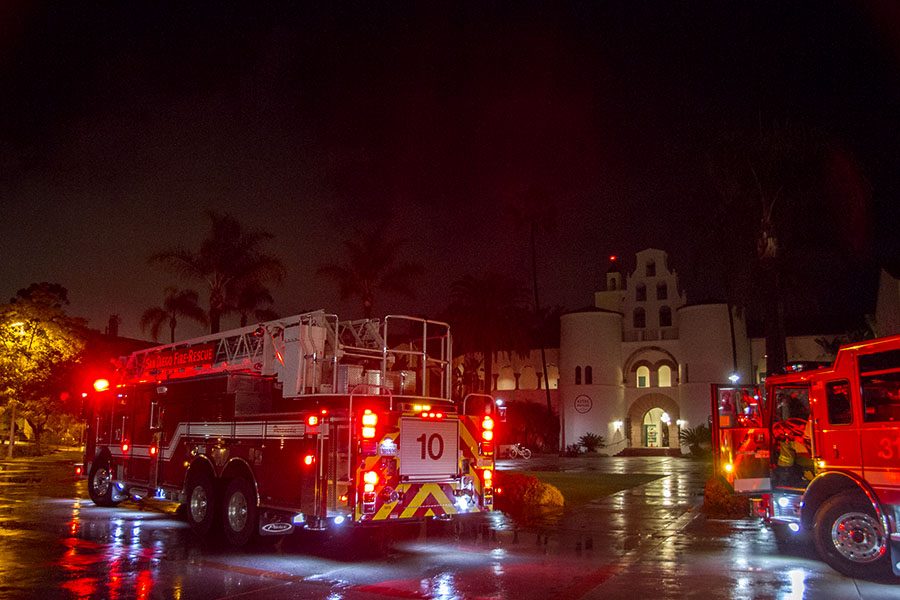 Campus police evacuated two classrooms and declared a fire warning after a smell of smoke followed a partial power outage in the Communication building and west side of Hepner Hall around 7:20 p.m. Monday night.

San Diego State Police Department Officer Charles Park said he found the basement of the Communication building flooded after he evacuated the classrooms and a nearby meeting.

He said he called the fire department and asked for assistance after he found the flood.

Ron Najor was teaching a Business Aspects of Film and Television Production class in Hepner Hall 221 at the time of the power outage.

“A police officer just came into our class and said ‘Hey there’s a fire warning and I’m going to have to ask you to evacuate,’” Najor said.

He said he and his class packed up their belongings and walked to the nearby quad.

”An officer came about 20-30 minutes later and said ‘It looks like it’s going to take some time,’” he said.

Park said the smoke was coming from the basement, and the prolonged power outage was caused by circuit breakers trying to reboot and force electricity back into the system.

“Water and electricity makes for a bad combination so they’re trying to get an electrician out here to shut down electricity to the building,” he said.

Fire Captain Scott Fuller from the San Diego Fire-Rescue Department said he did not know where the smoke came from until he wandered through the building and found access to the basement filled with about three-feet of water.

Fuller said several facilities equipment were underground in the Communication building, including heating and air conditioning.

“That kind of stuff that says, ‘Danger: High Voltage,’ but the whole basement has got about three feet of water in it,” he said. “It’s a pretty old building I’m sure.”

SDG&E arrived to the building around 8:40 p.m.
Officer Park said he was unsure whether classes would be held in the evacuated classrooms on Tuesday.

Andrew Volger from SDSU Facilities Services said SG&E started to drain the water in the basement at 9 p.m. Monday night and finished at 6 a.m. Tuesday morning.

The flood caused the transformer in the building to blow out.

“We’re bringing in an emergency generator,” Volger said. “It will be that way until we get this (the transformer) out of here.”

Volger said he has worked on transformers which have blown out in Hepner Hall and the Physical Science Building due to flooding in the past.