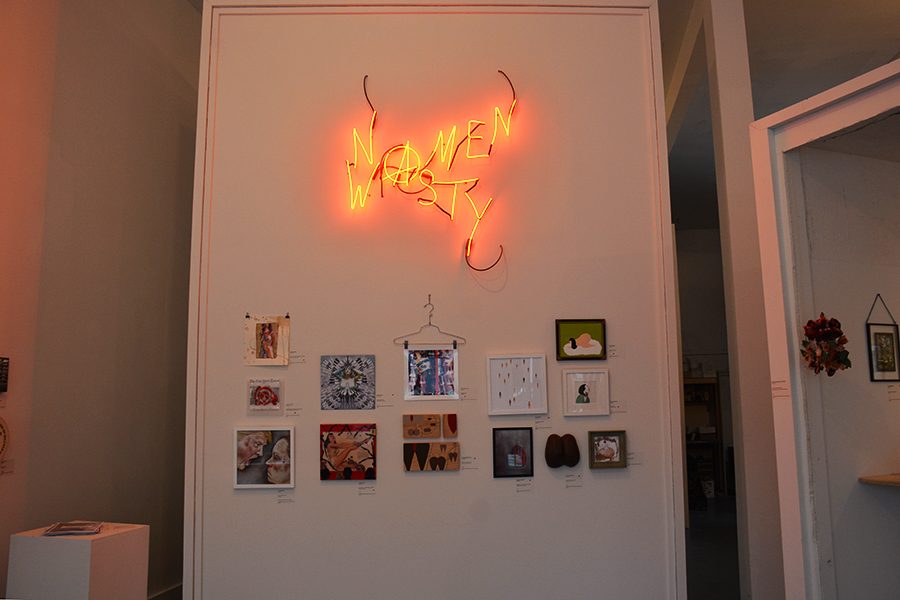 The Nasty Women Art Exhibition is a feminist event, with its mission statement supporting the rights of all women, including abortion rights and the rights of women of color.

Sister events like the San Diego exhibition are taking place not only nationwide, but around the world.

Those involved with the exhibition asked anyone who identifies as a “nasty woman,” referring to President Donald Trump’s name-calling of Hillary Clinton in the third presidential debate back in October, to submit their artwork to be sold to benefit an organization of their choice.

Volunteer Kara West said the words and actions of President Trump inspired the creation of the exhibition.

“(Our goal is to) stand in solidarity and do a show of so-called ‘nasty women’ and reappropriate that negative image of a bossy person into a positive, empowering thing,” she said. “Ultimately what we wanted to do with the show was to get proceeds that we could use to help support organizations whose work is maybe threatened by the new administration.”

The exhibition itself features various mediums, including paintings, sculptures, photographs and jewelry, as well as an interactive section encouraging children to create art.

“(Planned Parenthood) just got defunded, and I think everybody involved has grown up being helped by them,” Josh Pavlick, director of the exhibition, said.

Pavlick said the exhibition team originally gave artists the option to keep a percentage of their works’ profits, but none of the participants opted to do so.

Computer science freshman Samantha Kaczmarczyk supports the Nasty Women Art Exhibition and is empowered by the mission behind it.

“I love that women aren’t backing down just because we have a president that’s openly against Planned Parenthood and abortions,” she said. “I personally believe the government shouldn’t have a say over a woman’s body and the fact that women all over America aren’t letting this go and are taking this very seriously makes it so inspiring and impactful.”

As a result, she found that those who were not necessarily artists could help the cause utilizing any skills they have.

“After the election a lot of us wondered what we can do besides just being Facebook activists,” West said. “We realized that whether we were artists or curators or any of the different people that made up our team, we had a skill set that we could bring to the table and we could do something with it. It’s a stressful time and it’s really easy to feel hopeless, but think about what you’re good at and think how you can use those skills in order to keep change going.”

West believes that although Trump’s election is troubling and frightening to many people, it has also motivated those people to get involved politically in whatever way possible, and she hopes the enthusiasm continues.

“There’s definitely a sense of urgency, that we need to do something right now,” she said. “We’re really trying to find a way to figure out how to take the support and activism that we saw in creating this show and really sustain it.”

Pavlick said the art exhibition is a convenient way for artists to also be activists.

“People can show off their work here and it builds community,” he said. “It’s doing something we do anyway but for a cause.”

“I think (‘nasty woman’) already means somebody that is willing to speak her mind and stand up for what she believes in,” she said. “I think we’ve already taken over that and reappropriated what was meant to be a very negative thing and made it a very positive thing.”

Pavlick sees more events like the Nasty Women Art Exhibition in the future.

“Between the (women’s march) and stuff like this (exhibition), we don’t want this to be just this really empowering one-day thing,” he said. “I think this (exhibition) is the kind of thing we could do again.”

The exhibition’s closing reception will take place on Saturday, Jan. 28, and will include a DJ and a postcard writing exercise, as well as more art pieces and merchandise to purchase.