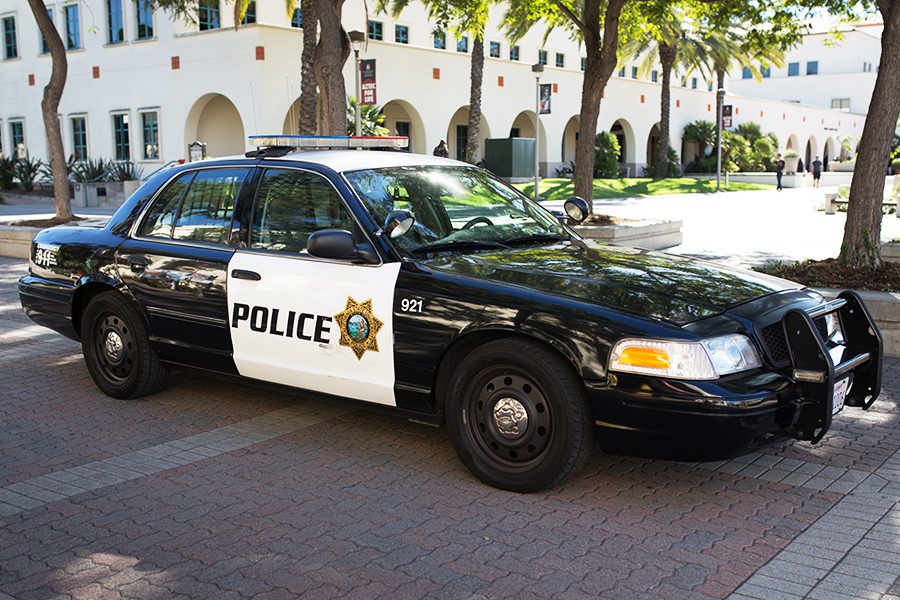 San Diego State police have suspended the investigation of a strong-arm robbery of a female student on Nov. 9, who was believed to have been targeted because of her Muslim faith, according to a statement from campus administrators on the day of the incident.

The investigation was put on hold  after police exhausted all leads and the student decided not to pursue criminal charges any longer.

The statement sent out by SDSU President Elliot Hirshman, Vice President of Student Affairs Eric Rivera and Interim Chief of Police Josh May condemned it as a hateful act.

According to a community safety alert from campus police regarding the incident, which took place the day after the general election, the victim was walking to her vehicle in Parking 12 when she was robbed of her purse, backpack, and car keys by two male suspects who made about then President-elect Donald Trump and the Muslim community.

The victim was uninjured in the incident, but when police arrived, they found her vehicle missing, the safety alert read at the time.

A protest was planned for Nov. 14, five days after the incident was reported. Various on-campus organizations, including the SDSU Muslim Student Association and Students for Justice in Palestine, encouraged students to attend. However, the protest did not take place.

“The victim has reached out to us and has told us that she would like us to not have a demonstration tomorrow,” said a Nov. 13 Facebook post from the SDSU Muslim Student Association.   “We would like everyone to respect her wishes and this decision.”

SDSUPD Cpl. Mark Peterson said the report of a stolen vehicle was later determined to be unfounded.

“It was discovered that the victim forgot where they had parked the vehicle and had initially believed it to be stolen,” he said in an email

Campus police worked the case for approximately six weeks, Peterson said, involving the FBI and District Attorney in the process, until the victim relayed to police just before the holiday break that she no longer wished to pursue the case criminally.

“Our officers looked at available surveillance video, followed up with the victim, and attempted to verify statements related to the case,” he said in an email. “The victim made the choice to no longer pursue the matter and we suspended the case as we had no further workable leads.”

Although the case is suspended, SDSUPD Lt. Greg Noll said the agency would not release any records related to the case, he agency has the ability to re-open it at any time in the event of the victim changing her mind, or should new leads arise. He also said there is no timetable for any such release.

“A release would jeopardize the case,” Noll said in an email.

Noll said the likelihood of the case being reopened was completely dependent upon the victim.

“We spent a month and a half on this case, including many outside agencies, and (were) unable to develop any new leads,” he said in an email.

“This case rests with the victim and her willingness to move forward.”

The incident made national headlines, and occurred as a number of similar attacks on minorities across the country in the aftermath of the Nov. 8 election.

The SDSU Muslim Student Association did not respond to a request for comment on this story.