He did Nazi it coming. 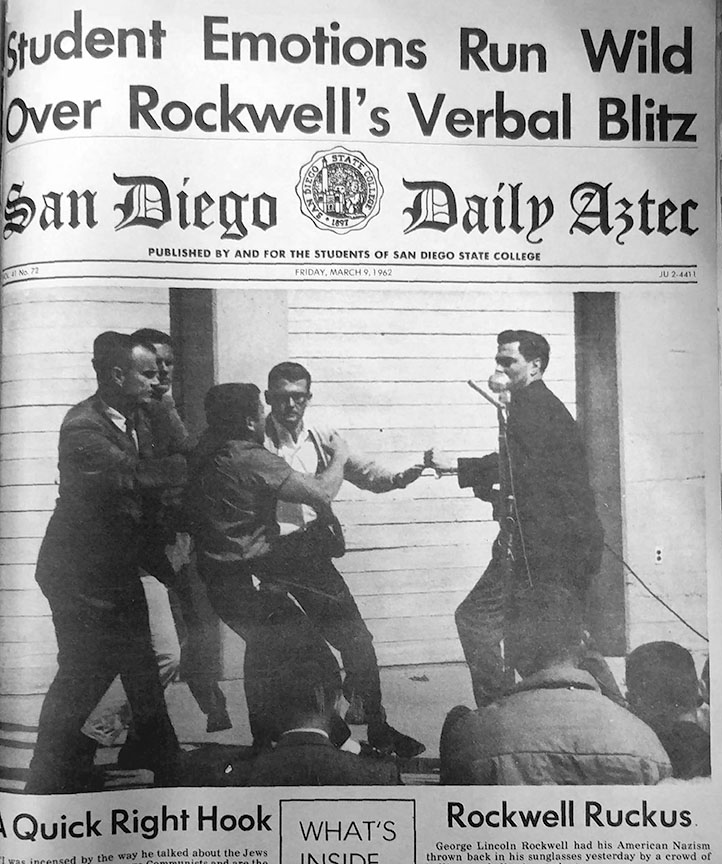 The internet was abuzz this weekend as video of white nationalist Richard Spencer getting punched in the face during an interview went viral. Spencer was explaining the Pepe the Frog meme when a masked assailant entered the frame, struck him and ran away. Memes and remixes proliferated throughout the weekend, leading many to ask: “Is it okay to punch Nazis?”

San Diego State has its own Nazi-punching history. In 1962, the Committee for Student Action invited George Lincoln Rockwell, the leader of the American Nazi Party, to SDSU, then called San Diego State College. Rockwell’s visit was marked by a student demonstration. At one point during his Open Air Theater speech, as reported in the March 9, 1962 edition of The Daily Aztec, Rockwell began to accuse Jews of being part of a “Communist conspiracy.”

The prevailing argument in 1962, and one that has been echoed in the wake of the Spencer attack — that repugnant ideas could be overcome by rational disagreement — is flawed.

Germany, in the late 1920s, was not void of rational disagreement with Nazism. It did not prevent the rise of the Third Reich.

U.S. media today is in a similar struggle today against a rising white nationalist movement — one which Spencer, deny it as he might, is a leader. However, all of the rational disagreement with this toxic and destructive ideology did not prevent its adherents from electing Donald Trump to the presidency. Spencer, who denies being a Nazi, famously led a post-election rally in which the audience engaged in Nazi salutes after he ended his speech with a cry of, “Hail victory! Hail Trump!”

In the video, before he is punched, Spencer answers “no” when a bystander asks him if he is a neo-Nazi.

There are not many non-Nazis who are constantly being asked if they are, in fact, Nazis.

In the decades since 1962, social norms worked to suppress neo-Nazi rhetoric, like Spencer’s, in the U.S.

For example, as Rockwell learned back then, one potential consequence of public alignment with Nazism was to be punched in the face.

That is not to condone violence — assault is a crime — but even Dr. E. B. O’Byrne, vice president of the college in 1962, admitted it was difficult to expect students to sit quietly and listen to Nazi ideology.

“It’s easy to say that’s the way to act,” he told the Daily Aztec, “but when a person begins to attack you and your ethnic minority group, you can’t say what you would do.”
Nazism, white supremacy and white nationalism never went away, it went underground. But the old neo-Nazis found a new avenue of recruitment, retention and propaganda with the rise of the internet.

Sites like Reddit, 4chan and 8chan have supplanted Stormfront as hubs for white nationalists. These online safe spaces provide fertile ground for Nazi ideology to permeate the zeitgeist so that users, who might never call themselves “neo-Nazis,” have unwittingly adopted their ideology as their own.

The anonymity of the internet has led to users becoming more comfortable with a certain type of bigotry — a type that, if said in public, could get a person punched.

It is therefore understandable how Spencer could forget the lessons of Nazis past. Comfortable in his electronic cocoon of like-minded racists, he forgot that in the real world, words have consequences.

Rockwell learned it in 1962, and in 2017, Spencer was also on the other end of a valuable lesson.