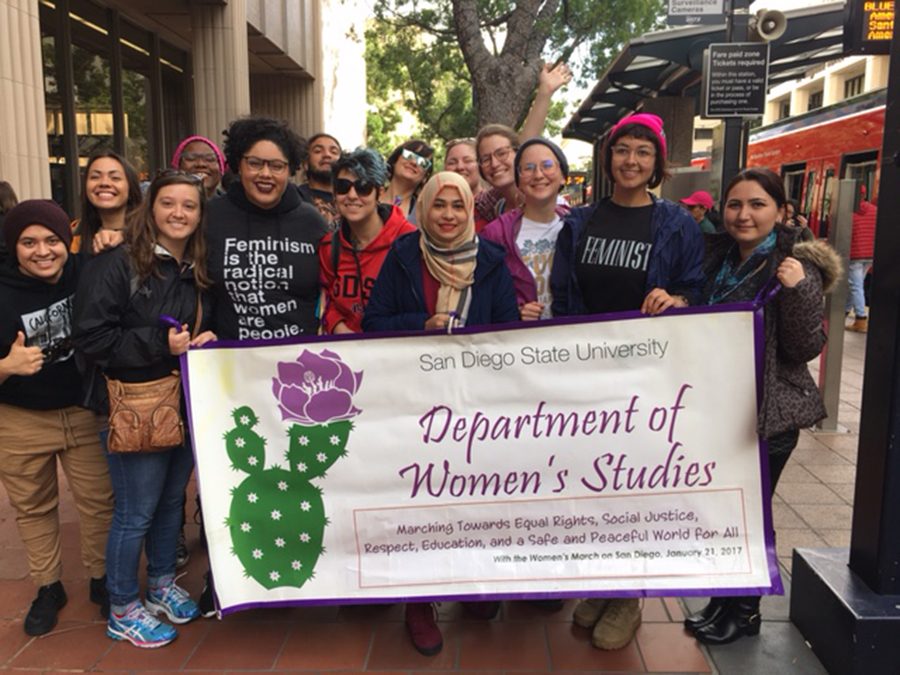 by Spencer White and Nicole Badgley

An event organized by the Women’s Studies Department on Jan. 26 invited community leaders to speak about gender justice.

The event, held at the Women’s Resource Center, was called “Don’t Agonize — Organize! Gender Justice in the Time of Trump,” and centered around educating women about how they can proceed to act with President Donald Trump’s policies against affordable healthcare for women.

It followed women’s marches for equality across the nation on Jan. 21, including one in San Diego which drew over 30,000 attendees.

Caroline Dessert, from the San Diego LGBT Community Center, spoke on the importance of not to going back to the daily routines and continuing to fight for women.

“This can not just be a moment, it has to be a movement within your community,” said Dessert. “Those 30,000 women need to become active members within their community.”

Dessert was one of five speakers at the event that represented several organizations advocating for women.

Being gay herself, Dessert explained the need to take action and vocalize on behalf of those who are being targeted in the country right now.

“There’s a difference between a moment and a movement,” said Dessert. “Thirty thousand people protesting in San Diego, that’s amazing. But that’s only a moment then people go back to their everyday lives. We need to continue to fight every day.”

While each speaker discussed separate components, they all came back to the topic of gender justice and what each student can do to be active in their local, state, and national governments.

Attendants had the opportunity to anonymously ask the speakers questions on notecards.

One question asked “What do you tell someone who is pro-life that women should have the right to choose?”

Claudia Huerta from Planned Parenthood answered that question. Her view was that the decision to have or not to have an abortion is between the patient, her health care provider and anybody else she wants to include in the decision.

Political science senior Lisa Baker was impressed with the event.

“I thought it was great to hear from people from different fields, but having them also finding common ground within themselves and the community,” Baker said.

Baker said she related to Dessert most.

“I really appreciated how knowledgeable and approachable she was,” said Baker. “I want to be a lawyer so it was great to hear that perspective.”

Baker was inspired by the event and said she is is considering getting involved.

“I am looking into adding a women studies minor,” said Baker. “I think getting involved in my community is something I could easily do.”

Huerta spoke about reproductive rights at the event.

“There is nothing to be ashamed of about having an abortion,” said Huerta. “It’s your body and it’s ultimately your decision.”

Women’s Studies department chair and professor Doreen Mattingly, who helped organize the event, said she was pleased with the turnout of nearly 200 people.

“It was a great event,” she said, “The Becca’s are great friends of mine and all the speakers were absolutely wonderful.”

Mattingly offered advice for young women trying to get involved within their community.

“Ask yourself, ‘why am I not involved already?’ find an organization and a cause that you’re interested in and get started,” she said.

Women’s Resource Center coordinator Jessica Nare said she was happy with how the event turned out.

“I think we got some clear direction in how students can get involved on the local level,” she said. “They all represent such important issues and they resonate well with ours students too.”

Nare advised students to find issues important to them.

“I think finding an issue you are passionate about and digging deep within that issue is important,” Nare said. “Especially how there is so much going on it could be overwhelming.”

The Women’s Studies department is hosting  the annual Feminist Research Justice Symposium from 8:30 a.m.-1:30 p.m. on March 10 in the Fowler Athletic Center and will present a panel of local activists to talk about activism on the issue of sexual violence on April 13.