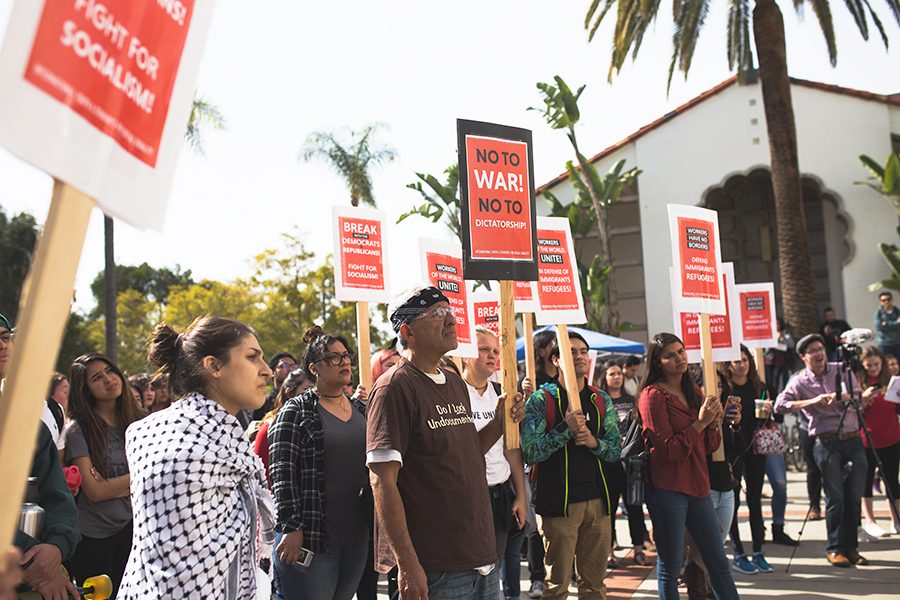 Members of the International Youth and Students for Social Equality, a socialist youth organization, held a rally in front of Hepner Hall the afternoon of Thursday, Feb. 2, while hundreds of students looked on.

The IYSSE is the student-arm of the Socialist Equality Party which “fights for the revival of a socialist movement among young people throughout the country, as part of an international socialist movement of the entire working class,” according to its webpage.

“We’re socialist — we’re Marxist,” said Genevieve Jones, president of IYSSE at SDSU. “We’re genuine Marxists. So we’re not Bernie Sanders, (whose) only goal was really just to channel opposition back behind the Democratic party.”

The protest was described on flyers handed out on campus as a demonstration against “the bipartisan attack on immigrants and refugees.”

Protesters chanted “No hate, no fear, refugees are welcome here,” at the start of the rally.

Kevin Brown, political science and economics senior, said the protest was something that should be happening.

“I think that it’s warranted, especially with all the things that have been going on with (the ) undocumented — and immigration in the United States” he said.

Brown said he heard about the rally through an email from a professor, and had attended a few IYSSE meetings.

As the rally continued, IYSSE members began advocating for their organization and political beliefs, saying neither political party represented their interests.

“The seven countries that Trump is banning—Iraq, Iran, Syria, Yemen, Somalia, Libya, Sudan—were all countries that (former Presidents Barack Obama, George W. Bush and Bill Clinton) have been bombing and destroying for decades,” Martinez said to protesters and onlookers.

Martinez said he is not an SDSU student, but likes to be present on campus by giving speeches, writing for the World Socialist Website and talking to students about IYSSE, which he said he has been a member of for the past 10 years.

Manny Aguilar, another non-SDSU student, also spoke to the crowd of students during the rally.

Aguilar said he is based in Los Angeles, and likes to participate in protests throughout the region, including recent airport protests and a demonstration in Tijuana that shut down the U.S.-Mexico border.

“I like to educate the young people by saying to them, don’t believe everything government tells you, because that’s not the truth,” he said.

Many students said they were receptive to the socialist ideology expressed by speakers at the rally.

“It’s nice to see something else different, instead of the whole Democrats versus Republicans,” she said. “It’s nice to hear and see a different point of view,”

Woldemariam said she thinks the word ‘socialist’ has lost the more negative connotations it has once held.

Some students also said they felt that the rally, which they initially believed was pro-immigrant, took too much of a pro-socialist turn.

“I liked the beginning of (the protest),” said Heidi Demello, an applied linguistics graduate student.

“The speeches are informative and interesting, but I feel like it would be great to have other events on campus, too, that specifically address the executive order that Trump issued with the ban of Muslims from seven different countries,” she said.

Theater arts senior Alex Demarco, who observed part of the protest while tabling near the farmer’s market, said while she supports some of their ideas, she wished the focus had been more on immigrants and refugees.

“I definitely agree with what they were trying to do,” she said. “When I walked over there, it sounded more like it was a pro-socialist rally, rather than a pro-immigrant rally. It would have been cool for them to have been a little bit more about immigrants.”