Local CEO has passion for planners 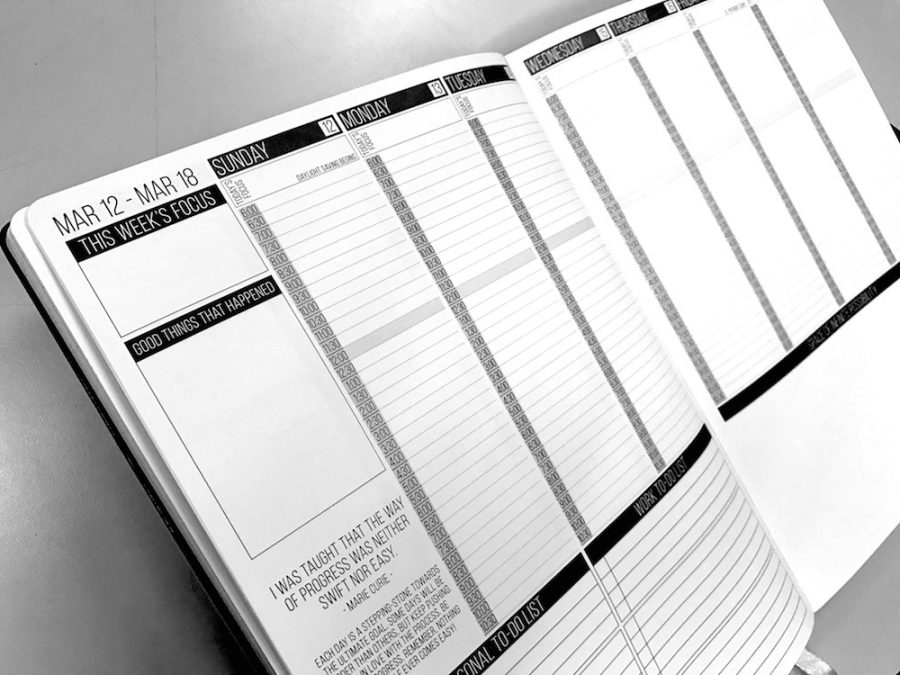 “Adult-ing” is not always easy and in a laid-back city like San Diego, it is easy to resort to procrastination.

The “I can get it done tomorrow” mentality can quickly lead to a stress-induced mental breakdown at 2 a.m. in the Love Library.

The acts of self-reflection and setting long-term and short-term goals usually do not make it on the average student’s to-do list.

The Women’s Resource Center hosted the “Get Your Sheets Together” workshop and Q&A featuring Passion Planner CEO Angelia Trinidad in the Center for Intercultural Relations on Wednesday, Feb. 1.

Trinidad held the event as part of the center’s “Adult-ing 101 series.”

Passion Planner is a local company based out of San Diego. The planner consists of a Passion Roadmap, monthly layouts, weekly layouts, reflection pages, and various pages to use as a creative space.

Trinidad graduated from UCLA in 2012. While studying at UCLA, she openly defied her parents for the first time by changing majors from pre-med to art.

“There is a point in your life that you decide your happiness is more important than anyone else’s,” Trinidad said. “You’re the one living your life.”

While in college, Trinidad was extremely busy. She was in a sorority, worked two jobs, taught in a sculpture lab, and taught second and third grade art.

However, upon graduating, Trinidad said she felt directionless, fearful and lost. She knew she wanted to create a tool to help other post-grads and peers overcome this frightening feeling of “analysis paralysis” and redefine their passions.

That is how Passion Planner was born.

She said art gave her the courage to take something abstract and make it into something real. She said teaching helped her understand how to create just enough structure that still allowed people to feel creative. She said entrepreneurship taught her that the secret is in the doing.

She started by launching the product on Kickstarter because she didn’t have enough money to start the company herself.

Trinidad decided to offer her Passion Planners for free to those who shared her Kickstarter video. This was the campaign that launched Passion Planner into virality as it was shared over 500,000 times.

Trinidad raised $1.6 million on Kickstarter alone and that was only the beginning. Fast forward two-and-a-half-years and Passion Planner is now the No. 1 ranked planner on Amazon, with its own building in National City.

“When you write in a planner you clear your mind of pestering thoughts,” Trinidad said. “When you write something down you can revisit it at any time. You are subconsciously asking yourself, ‘What are my priorities?’ and you don’t need to think about it throughout your day.”

Trinidad said writing to-do lists in our phones is not the best option for productivity because they can be endless.

“You’re never going to get to those to-do lists,” Trinidad said. “I look at my phone and find some from four years ago.”

Writing is cathartic and something about the act of writing our goals down in one place has the potential to keep us feeling more accountable than we would had we jotted them down on our iPhone’s Notes or kept them tucked away in our heads.

Trinidad said she read 300 self-help books and took the best concepts that she could find from them and incorporated them into Passion Planner.

The planner helps turn one’s short-term goals into long-term goals by breaking everything down into little steps.

“My planners have become a scrapbook of my life,” Trinidad said as she held up a few of her old Passion Planners to the audience. Her planners were full of bright highlighted notes, photos and quotes.

“It is very important to have a visual representation of your time,” Trinidad said. “When you do things passively, you may not realize what is a bad habit.”

Toward the end of the presentation, Trinidad and two members of her Passion Planner team had the audience participate in creating “Your Passion Road Map,” which is an activity that can be found in each Passion Planner.

The Passion Road Map is a step-by-step guide to mapping out one’s goals. It allows a person to make a wish list and then map out what he or she would like to accomplish in three months, one year, three years and in their lifetime.

Once the audience stated their goals for each time frame, they went back and circled one goal from each category that would have the most positive effect on each of their lives.

Lastly, they prioritized these goals and then created a Passion Plan and chose a “Game Changer,” goal to break things down even further, making them time sensitive.

Emma Mackey, who is getting her Master’s of Arts degree in Latin American Studies in May, owns a Passion Planner.

“I have my thesis for Latin American studies due in one month,” Mackey said. “The Passion Planner has helped me because I was able to make a Game Changer … which helped me get on track with my thesis about violence against women in Bolivia.”

It’s a good thing that Trinidad “just started doing it,” because now 157,074 planners have been given away. That’s enough people to fill the Staples Center up six times over.

“Having somewhere to vent to consistently and a place to write down ‘little wins’ helps me.,” Trinidad said. “That is a little win that if I schedule, commit to doing it, and actually do it, can pull me out of that (dark) place.

Trinidad said she wants to remind students that when they get overwhelmed because something is too difficult, just remind yourself there is always someone else out there who has done exactly what you wanted to do, but had the courage to ask.