‘The Vagina Monologues’ breaks down stigma 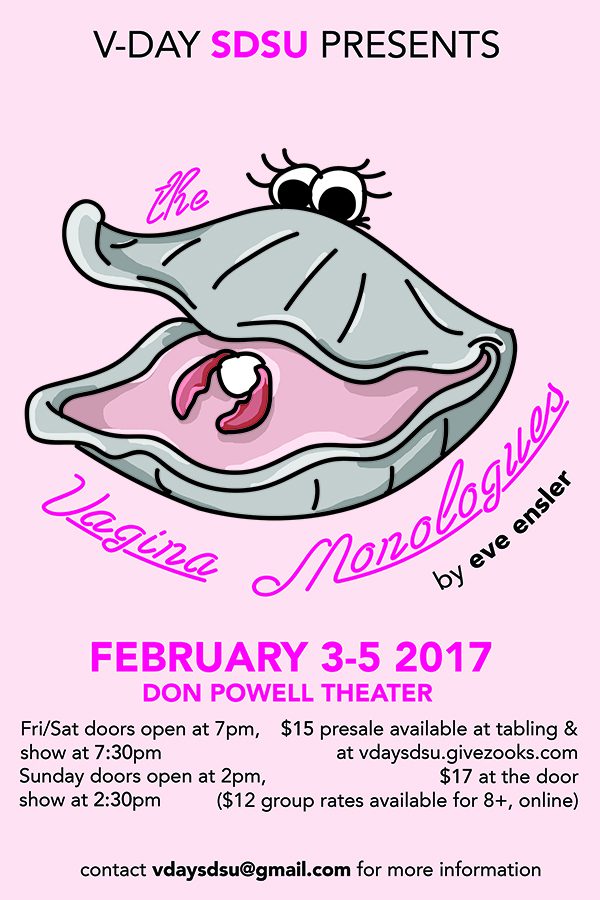 V-Day’s production of the Vagina Monologues is an unapologetic ode to the female body.

Filled with explicit and descriptive details about vaginas and everything that comes with them, the Vagina Monologues attempted to break down the social stigma associated with vaginas.

“When we talk about destigmatizing something, it’s really about realizing ‘oh its okay to talk about these things,’” said Nassim Moallem, co-producer of San Diego State’s V-Day chapter. “We don’t talk about women’s sexual pleasure a lot in a positive format and in formats that center women’s experiences. We don’t talk about menstruation comfortably. (The Vagina Monologues) is kind of putting these things out in the open.”

The Vagina Monologues is a play originally directed by Eve Ensler.

After Ensler interviewed 200 women about their views on sex, relationships and violence against women, she created The Vagina Monologues to celebrate the female body.

SDSU’s own version of the play was shocking, hilarious and moving.

The opening of the play is solemn as every actor introduces the story behind the Vagina Monologues, but the play quickly jumps out at the audience with the first monologue of a woman talking about her pubic hair.

With a cast of women of different nationalities and body types, each monologue was performed with such passion and conviction that the issues in each monologue felt personal and real despite a lack of costumes and stage design.

Some monologues were solemn and touching as women lamented over their experiences of sexual abuse.

Other monologues of women reclaiming the word “c–t” by shouting it at the audience or of women acting out different types of sex moans were more empowering.

Although the play sticks to a staple script, every year a new monologue is added to the script.

For the past two years, a monologue was added to highlight trans-women experiences, to make all women feel included in the current social climate.

“It’s not supposed to say this one woman’s experiences or this is all women’s experiences,” Moallem said. “It’s trying to present an array and kind of see what falls in your lap as something you want to take home.”

Although the play was explicit in its attempt to break down the oppression of women and destigmatize the idea around vaginas, the play itself encouraged audience members to interpret their own meaning of the play.

“It’s a play and like all plays it’s up for interpretation from what you get from it,” Moallem said. “So we really do try to make it empowering. I always say you’ll laugh, cry, you’ll feel kind of uncomfortable, but you’ll also sometimes really relate to certain pieces or it’ll give you a new perspective.”

Female audience members left with the reaffirmation of their feminist beliefs.

Along with V-Day’s dedication to stopping violence against women and girls and tradition of giving the money back to the community, 90 percent of proceeds from the play were donated to South Bay Community Services, a non-profit that helps families, youths and victims of domestic violence since 1971.

The other 10 percent went back to V-Day SDSU to help continue their mission as a non-profit committed to ending violence against women since August 2001.

V-Day SDSU makes an effort to help local that also tend to be overlooked, Moallam said.

The Vagina Monologues is an experience that forces the audience to experience topics and issues that are rarely spoken about.

While most people keep their voices low while talking about vaginas and everything vagina related from hair to periods to childbirth, The Vagina Monologues yells it out.

“(Watching The Vagina Monologues) is a very college experience,” Maollem said. “We’re living in a society that has women and has vaginas, and it’s really important to understand the experiences of other people, and college is the best time because you’re surrounded by so much diversity.”

The Vagina Monologues have taken place at SDSU for more than a decade.