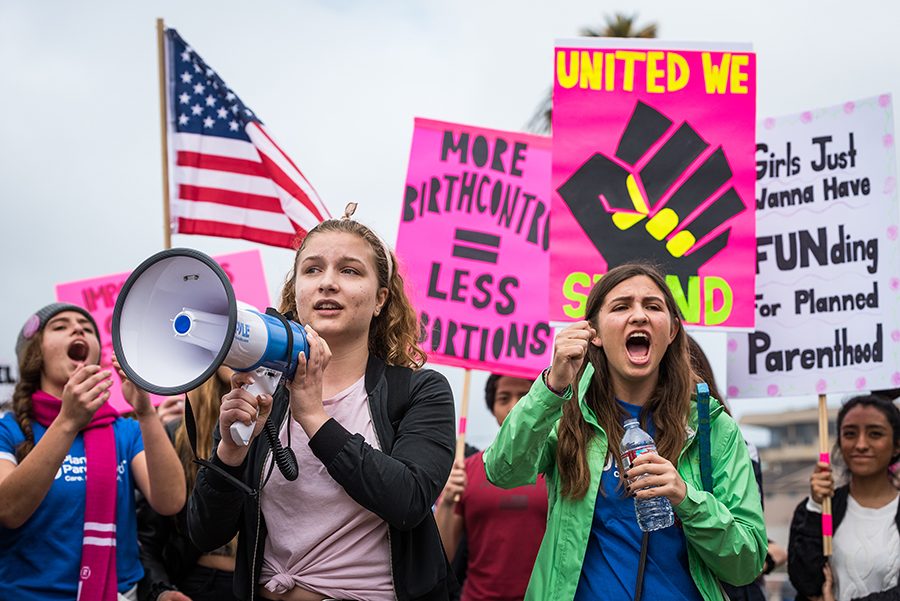 An estimated one in five women in the U.S. has visited a Planned Parenthood health center at least once in her life, according to the non-profit organization’s website.

In the wake of Donald Trump’s presidency, pro-choice advocates fear federal funding and funding for women’s health services through the Affordable Care Act will be cut from the organization.

The event was organized by Elena Scott and Sophie Stremel, two students from Pacific Ridge High School in Carlsbad.

Pacific Ridge School student and march volunteer Isabella Sevigny said they could not have expected how many demonstrators turned out, despite heavy rain early in the morning.

“It’s so important because we need to be able to tell everyone that we are standing for women’s rights regardless,” she said. “The more people included in this, the better.”

Starting at Moonlight State Beach around 10 a.m., protesters walked  along the South Coast Highway sidewalk before returning to the beach at about 11:30 a.m.

Planned Parenthood requested all counter-protests be held away from clinics, according to the march’s Facebook event page.

San Diego State communication senior Natalie Rangel said she came to the march to get more politically involved at a local level.

“I feel very frustrated (by) the current events happening,” she said. “I believe that no matter what your view on abortion is, everyone deserves the right to choose what’s best for their body.”

SDSU Alumnus Jenné Fredrickson, ‘12, said she has gone to Planned Parenthood since she was 16.

“My insurance covers everything now, but I still want to give back because I know not everyone can say that,” she said.

San Diego artist Alice Branca said she was at the march because the non-profit organization helped her when she was younger, and she could not imagine the administration doing away with it.

“There (has) been so much progress made in my lifetime, and we cannot allow them to go back,” she said. “We have a separation of church and state in this country, which respects the rights of individuals, and this new administration is stomping all over them.”

“Especially at this time, it’s important to gather the support and get the message spread,” she said.

Marketing junior Linda Dawood identifies as pro-life, but said she would probably not attend a protest at a Planned Parenthood clinic because it didn’t seem peaceful.

Dawood attended the Walk for Life in San Francisco on Jan. 21. She said it was very important protests were done in a respectful manner.

“Like you have the chants were abortion is murder, but it wasn’t hateful at all, it was like ‘let’s help them,” she said. “But some protests I’ve seen recently have gotten very violent, and that crosses a line.”